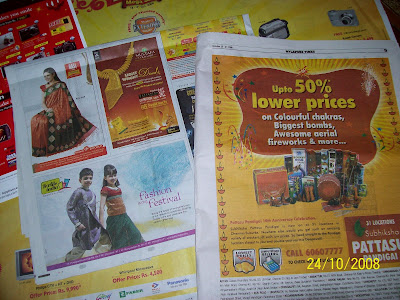 The rainy season in Chennai is sandwiched in the three weeks or four between the two main festivals - Navarathri and Deepavali. Old timers in Chennai often point out how it will definitely rain on the last day of Navarathri, and last till beyond Deepavali.

One would think it was enough to dampen (literally) people’s spirits. But no! Deepavali, which literally means row of lamps, (though we never have that in the south) is the one festival when people really go berserk – new clothes, fireworks and crackers, sweets galore and that phenomenon - Diwali movie releases. The reason for the festival is often forgotten, but the
celebrations never diminished.

This year too, the rains came on schedule – thank goodness, otherwise we would have had to face a drought in the summer. For the last two weeks it has been raining constantly, with heavy downpours off and on, telling us that the north west monsoon is doing its business thoroughly.

The festive spirit rules and one can see the enthusiasm of the people, especially when it comes to shopping. Newspapers, magazines and the television are blazing with colourful advertisements for clothes, sweets and snacks, and firecrackers. Along with these are ads for refrigerators, microwaves, pressure cookers, mixies and so on – because many companies give festival bonuses to their staff now, and they have to be helped to spend it. 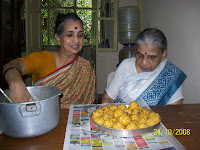 To us, the festival is rather low key, since there are no youngsters at home to bring that exuberance in. But we follow tradition and have bought the required new clothes, a few firecrackers
and made some sweets. Since my mother is here we decided to make her specialty - laddoos, all the while reminiscing on earlier occasions when she made them. My nephew as a little fellow used to refer to them as 'round, round, yellow things'.

When my boys were young children, they would start talking about Deepavali from weeks ahead. The lead up to the festival was the most fun. Their main concern was fireworks and crackers, and to buy them early enough so they could be dried and made crisp in the sun, when it shone between rains. My father-in-law would give them and their cousins a rupee (a rupee went a long way then) each everyday from a month before, to buy
crackers. And they had to spend it the same day, which meant they got to burst crackers everyday. The major share had to be purchased by their father. One year, my son, fed up of reminding him, left a message for him on the cassette recorder, “‘Appa dappaskku thuttu tha’ (Father, give us money for the crackers).” Repeating it faster and faster till it reached a crescendo. And played it constantly.

Clothes were not very high on their list of priorities, and they were all right with
whatever we got, even if it was tailored by me. But sweets and savouries were another matter. They used to love sweets, and would request their favourites to be made – some of which can be made only by professionals, or at least, not by me. And the kitchen would be a scene of active preparation for up to a week ahead. (Sweet shops and professional caterers were not so much on the scene then). The finished products, whether hit or miss, were consumed happily - along with the goodies brought by our neighbours and relatives, with whom we exchanged ours.

On the day, after the mandatory oil-massage and baths
early in the morning, and wearing the new clothes, they would light
fireworks and crackers, and eat sweets first thing, with no one telling
them off. Later on with visiting friends and cousins and return visits,
it would be one long day of merrymaking for them. When television
arrived, there were special programmes on Deepavali, and the interest in seeing movies in theatres waned. In recent years I have seen it pick up, however.

That frenzy of activity is missing now in our pre-festival days.

But when friends and relatives with young children visit on the day, we once again get a whiff of that innocent happiness of childhood.

Swarna sent me this link. Listen to the joyous melody of Deepavali. http://psuseela.tripod.com/sus13.ram.

P. S. If you can't open it, try this
- (courtesy blogeswari)
Posted by RAJI MUTHUKRISHNAN at 12:00

Lovely photos. totally agree on the deepavali and rain combo :)

Any laddoos left - they look real yum!! Raji, will periamme agree to cooking classes for us unskilled lot?!

Seriously, would love to learn how to make laddus - haven't a clue!!

Boy am I glad am coming to Chennai - please, pleeeease keep my share of those round round yellow things - after all my claim to fame is that I am his Mom !!!

maan - those boondhi ladoos look fascinating.. with just teh right amount of camphor and sugar and.....

and may the rain cool chennai and clean the air

I am missing the festivities and the Laddoos already....

could you send some over to Netherlands...they look yummm...

made me see my childhood..thanks for writing this post..

wish you and all in your family a very happy diwali.

Oh Raji, how beautifully you have captured the Deepavali memories of my childhood! By the way, the link to the festival's origins does not work.
Happy Deepvali to all of you.
Love
Kamini.

raji mam.......happy diwali! where is my share of home made laddus??

Happy Diwali, Raji!
(we Mumbaikars just have to do things differently, dont we? Right down to spellings)

Thanks a lot for sharing this with us ... this helps us understand your culture better ...

So well written that it helped understand our culture better..!!! :) Great to see the spirit and tempo of the festival is maintained to date.

The rainy season in Chennai? The sewers overflow in the streets joining with the rain water and other effluents that mysteriously manifest from somewhere forming a 'Sangam'! The sight of remanants of chewed tobacco and leaves floating adding to the discomfiture! On the top of this, the stray dogs keep company with you ( they also materialise from nowhere) asking you to behave reminding about the rabies!

One experience was enough for me as I had to take shower scrubbing myself for tens of minutes. I would not set foot in any street in Chennai for a million rupees.
If there is any question of India being a third world country, there cannot be a better proof than the experience of walking in the streets of Chennai on a rainy day!

Karthik Narayan - the rains have gone!

flower girl - feel free to try your luck, and the master chef is game for giving lessons.

maddy, boltthrower, blogeswari and fitness freak - you are all welcome home to taste the laddoos.

Swarna, yes careless of me - should have mentioned the lehiyam!

Namaki , I am glad it helped you to appreciate the festival.

Kumar, what to do? Chennai is like that wonly.