This is the question that is at the back of my mind when I wake up every morning.

The power goes off promptly at 6 am and doesn’t return till 7.30 am nowadays. Following the recent rules of load shedding on account of power shortage in the state, it used to go off for an hour from 10 to 11 earlier, but after a welcome break of no power cut, one fine morning at 6, it just went off. We waited a while thinking it might be one of the routine grid changes, but we waited, and waited, and the power did not come back. All routine work of the household was at a standstill. We kept trying the Electricity complaint number, and found it engaged. My sister-in-law called to ask if there was power at our place – she lives next door. I told her the situation, and that I could not connect to the Electricity Department either.

A few minutes later she called to say that she had called the Electricity people , and they had told her that this was the new schedule of load shedding – 6am to 7.30 am.

There we were, stuck, unprepared and at a loss. It was not so bad for us because there are just the two of us retired folks and my mother here, not in a hurry to go anywhere. But imagine the plight of households where people have to go to work, and children get to school on time, especially in multistoried flats – the lifts won’t work!

But the human(read our) spirit is resilient and finds ways to overcome the problems. From the next day, we switched on the motor at an earlier hour, checked mail before 6 am, and decided to postpone baths and cooking till the power returned. We try not to switch on all the appliances at the same time for fear of a heavy load causing a fuse to go off. The resultant free time we spent on reading the newspaper from cover to cover, including supplements, exchanging the sheets, sitting as close to the windows as possible. After that, I decided to do some fine tune dusting and cleaning. Not my favourite chore, but well, it has to be done some time, and this was as good a time as any. My mother chose to knit, and my husband some reading.

And so it went for a few days, when one morning after hurrying through the pre-power cut routine, we found that the power did not go off at 6. Well, well, we were elated, but not sure if it would go again at some later hour, for which we would not be prepared.
But, oh great wonder, and thanks be to the powers (!) that be, it did not go off at all. Nor on the next day, nor yet again on the following days. Happy days are here again, we sang, and were lulled into thinking that the days of power cuts were gone. We went back to our original routines, without the hustle and bustle between 5 and 6 am, starting work in a more leisurely manner.

Then one day, with the motor not switched on, the water not heated, the mail not checked, suddenly the power went off without warning, and we were caught! 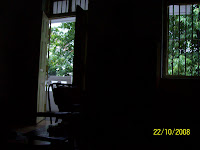 And since then it has been so – power-less on some days, and power-ful, on others, we never know till 6 am – if it is going, it goes on the dot of 6. If not, hey great!

Am I complaining? I dare not. Ever since my husband returned from a visit to Thiruvannamalai a couple of weeks ago, and told me that the power cut there lasts five hours, I have kept mum.

Now today the papers say that there is a new strategy from the Electicity Board to encourage less consumption – double the charges beyond a certain limit.
Posted by RAJI MUTHUKRISHNAN at 06:46

Email ThisBlogThis!Share to TwitterShare to FacebookShare to Pinterest
Labels: electricity board, power cuts

@Raji
Our endurance frightens me... (I read this is Shantaram!)
Actually, we excel at finding workarounds.. esp when it comes to load shedding!!
On a serious note, isn't it embarrassing... India Shining , et al... and two "Urban" people discussing daily load shedding?

Raji,
I believe Chennai is better off, friends at CBE and elsewhere have learnt to put on wider grins, despite the nagging thought about power tapping and thefts, by those who know how to!

I like that story ... I could identify easily having experienced some similar situation while living in the West Indies ...

Here in Bangalore we have power cuts in summer.

We feel better when we air and share our woes, don't we?
Nice one , kat.

Ayyo - thank you for stopping by. The only load shedding urban people should discuss is adipose, I suppose? I did not get the reference to Shantaram, I am afraid - I suppose you mean the book?

Swarna, Yes, we are luckier than our mofussil brethren.

Webradio, India can send a mission to the moon, but still cannot give power to all.

Namaki, yes, it is easier to understand if you have undergone the same experience.

Indrani, hope you have none now.

Kat, good one, as Kalyani says.

if only the people in power relaized the power in strengthening the infrastructure of the country.