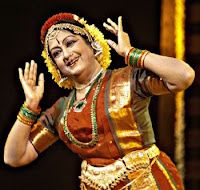 Posted by RAJI MUTHUKRISHNAN at 17:41 21 comments:

MY COUSIN THE WRITER

The family is feeling very proud, and patting itself on its collective back - one of our clan is now a published writer. 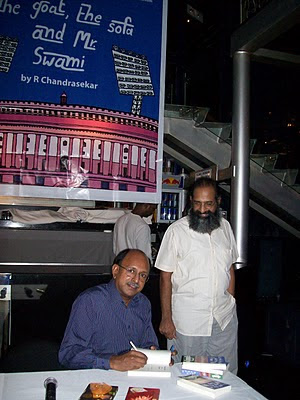 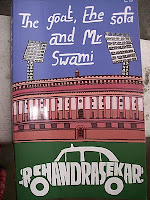 My cousin Sekar’s book, The Goat, the Sofa and Mr. Swami, has been published by Hachette  recently.  There was a book launch to mark the event, and what was to have been a modest crowd at the Pasha at The Park turned out to be a standing-room-only affair.
My brother Raja, his good friend, ( in the picture above with Sekar) came down especially from Delhi for the event – and was pleasantly surprised to see his name in the ‘thanks’ page – a tribute to their friendship.
Tim Murari, a well-known writer from Chennai, was the chief guest on the occasion, but not having had time to read the book, since it reached him rather late for that, he could not offer any comment. His taciturnity was balanced by the friendliness of the crowd tossing intelligent questions at Sekar, who answered articulately and calmly. Sekar also read an excerpt from the book, making us want to read more.
The book is an interesting read, and can be termed a gentle satire. The Pakistani Premier wants to visit India to see a cricket series, a dubious premise, but that sets the tone of this story, creating many absurd situations. The novel is in the voice of Joint Secretary Swami, the Indian Prime Minister’s general factotum, and he narrates the story seriously without descending to the ridiculous. And I think that is where the writer’s triumph lies - the  book is not farcical, while the state of affairs (affairs of the state?) is.
Sekar (R. Chandrasekar) schooled in Mayo College, Ajmer, and studied in Vivekananda College here in Chennai and then in the Delhi School of Economics. He went to the US and did a Masters from the University of Chicago, and worked there for some years before returning to Chennai and settling down.
Here is wishing Sekar the publishing of many more books.
Posted by RAJI MUTHUKRISHNAN at 18:52 15 comments: