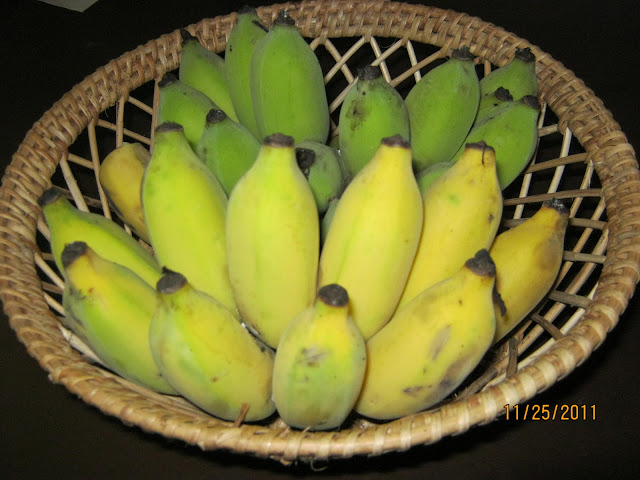 I never thought I could get so excited over a bunch of bananas. It is a commonplace fruit, a part of our daily diet, and one we see everyday in various shapes and sizes, at home and in the shops. So why this elation over these tiny ones, barely longer than my fingers!

Because they came from our own front yard. 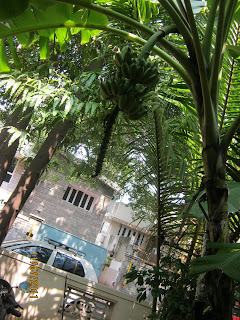 We live on the first floor of the house my father-in-law built about 60 years ago. We used to live on the ground floor and moved upstairs for various reasons nearly 20 years ago. A bad move, let me tell you, when you are getting older, and your knees and other joints are beginning to creak. Till the early 90s , before there was water shortage and our well dried up, we maintained a fairly decent garden in the front yard.  At one time, we even grew brinjals and snake gourds on one part. We had a little hedge of henna (marudani) shrubs, which was very popular. People took them freely, asking permission sometimes, and sometimes not. There were some hibiscus bushes, enough to give us blossoms for the pooja room pictures. And other flowers and crotons. There even was a jasmine pandal. My brother-in-law, visiting from the remarked that it looked  like a lush tropical garden. Sadly, no pictures exist of those days.

When the drought came, and water was at a premium, I had to let the garden go. It was sad, but we just couldn’t buy water to water the garden. We comforted ourselves by saying that when the rains came, the plants would sprout new leaves. But the rains failed successively for some years, and our garden slowly died. Except for the two coconut palms which valiantly stood their ground. We then moved upstairs, and we left the tending of the front yard to the occupants downstairs – my brother-in-law’s office. 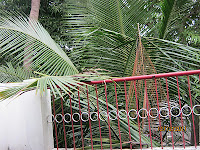 All these years, apart from pulling up the henna shrubs, much to my dismay, for they planned to do some landscape gardening, they did not do much. The yard in the front and sides were swept clean and the few shrubs that remained watered.  Two more palm trees, which my neighbour Yogambal had given me when they were about four feet high, remained at the same height.  But the last few years there has been plenty of rainfall, and our two palm trees have risen, and their fronds hang very romantically over our balcony – I remember scenes in movies where the hero and heroine would croon on the balcony with the palm leaves in the background.

But I have meandered. My story is about this person with  green fingers. He is Chandrasekar, employed by the office downstairs as a security person. Looking at him in his grey uniform , you would never think that he could get down on the ground and work such marvels. He has changed the face of the front yard. 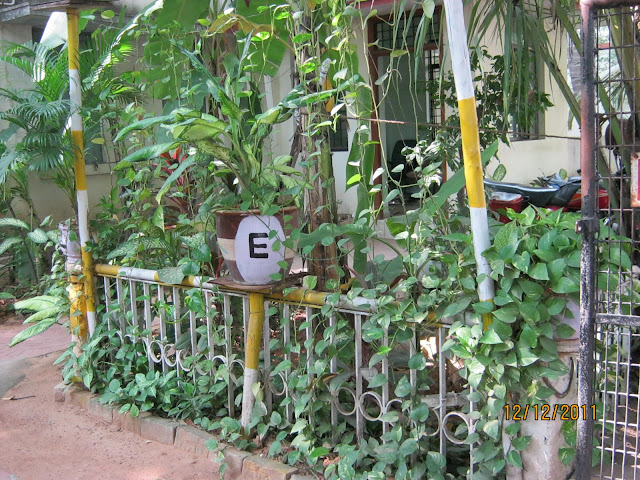 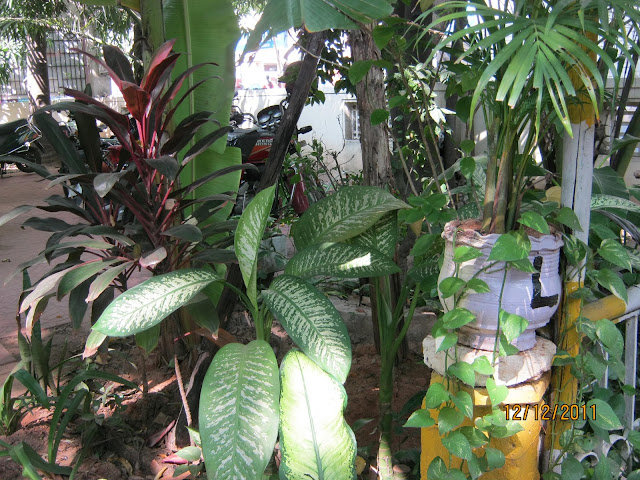 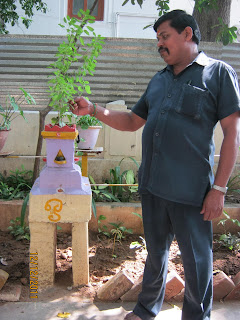 Chandrasekar is from the rural areas and came to to make a living. But his roots are in the green pastures of his village home near Trichy, and his passion is growing things. Rather than sit idle, he has spent his ‘watching’ hours, if you will pardon the pun, fruitfully. He has planted all sorts of green plants all over the place, and some in pots which he has painted himself. Some of the pots have been painted with letters that spell out WELCOME. He repainted the thulasi madam and made sure the thulasi is green and flourishing. 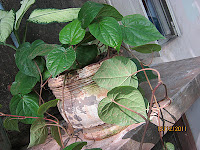 Not an inch of space has gone waste. There is also a betel leaf creeper in a pot. (And I have one on the balcony, too).

He got hold of some banana saplings and planted them, and tended them so sincerely. It was no wonder when one of them flowered. When we returned after our extended trip we were so happy to see the small fruits. My grand daughter who loves bananas was happy to see them on the tree and touched them gingerly. The fruits were then ready for picking and Chandrsekar cut off the bunch and gave us the green fruits to ripen.  And that is the bunch you see at the top of this page.

And now another plant has borne fruit, too. 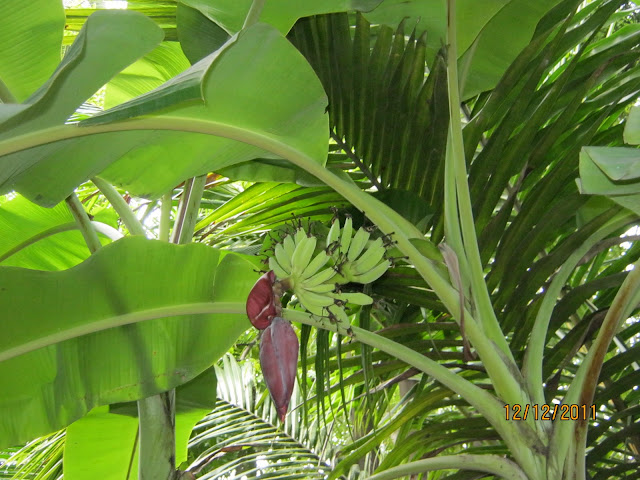 Posted by RAJI MUTHUKRISHNAN at 16:26 17 comments: