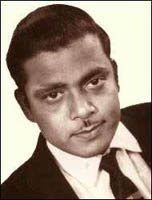 It is almost Deepavali, and the hit song of ‘Kalyana Parisu’ (1959)
உன்னை கண்டு நான் ஆட
என்னை கண்டு நீ ஆட
உல்லாசம் பொங்கும் இன்ப தீபாவளி
“Unnai kandu naan ada
Ennai kandu nee ada
Ullasam pongum inba Deepavali” (roughly this means, let us both sing and dance and celebrate Deepavali’) will be broadcast and telecast, as it has all these years, every Diwali, for almost 50 years.

“I saw ‘Kalyana Parisu’ when I was at the impresionable age of 12. And I remembered the copious tears I shed because of the 'star-crossed lovers’ tribulations'. I loved the songs, the grace of Saroja Devi, the cruel twist of fate which prevented her from marrying Gemini when he was free. When I saw the movie again 25 years ago on DD’s weekend feature, I was still moved to tears”

This was part of my comment on fellow blogger GVK ’s post on the movie Kalyana Parisu. C. V. Sridhar, the director of the movie, died earlier this week. He was barely 30 when he directed it.

And this was the movie everyone remembered when he died – it was his first, a trendsetting movie in Thamizh which shot him to fame. It had a fantastic story line, good acting, great music, an unforgettable comedy track, and no villains. Possibly for the first time, established villain actor M. N. Nambiar played a benevolent benefactor of the heroine. The first Thamizh picture to run for 25 weeks.

And as with all first timer achievers, a lot was expected of him in his next films, and to be fair to him, he managed to justify those expectations with something new in every picture. As a young girl, I used to wait eagerly for announcements of his forthcoming pictures.

He concentrated on social themes, and his denouements always had an element of surprise, without a conventional ending. His finger was on the collective pulse of Tamilnadu, and he pulled at their heartstrings with moving stories - Nenjil Oru Aalayam, ( picturised in 20 plus days on a single set with no established actors), Meenda Sorgam, Policekaran Magal, Sumatihaangi, Nenjirukkum Varai ( no makeup for the actors in this, not even Sivaji) were some of them, and all of them hits.

But he could create a riot in comedy too. Then Nilavu in black and white, starred Vyjayanthimala and Gemini Ganesan and was newsworthy because it was the first Thamizh picture to be shot entirely on location in Kashmir.

He excelled himself with the youthful Kathalikka Neramillai in colour, with fresh faces for the main roles. Non-stop laughter from moment one with sizzling music, people saw it repeatedly in the theatre.

He directed Sivaji Ganesan in more than one movie and MGR in Urimai Kural. And Rajnikant and Kamalahasan in Ilamai Oonjaladukirathu. But he did not need stars for his movies to be hits. The story was always the star. In fact he introduced to the screen some of the famous names today, the most important one being Jayalalitha in Vennira Aadai.

Apparently he had tried Hema Malini (given her a screen test) for a role, and found her unsuitable – Homer nods! – and she went on to make her name in Hindi pictures. Later on, he did make a movie with her in Hindi, I read, but I am not sure. He remade some of his hits in Hindi - like Nazrana, Dil Ek Mandir, and Pyar kiye Jaa.

Raji Mom..you teach me something new everytime....another great one....you are simply the BEST!!!

Hello Raji !
I have learn something with Your text...
Thank You for this...

Raji, this is very good. You have missed your profession.

Shridhar is one of the most extraordinary directors in Tamizh cinema. Sadly , he was never 'awarded' the recognition he deserved.

When your Dad was RDO in Chingeput, Sridhar was living in Alagesan Nagar.
I think he was a Senior at St. Joseph School.

When he moved to Madras, he used to hangout with Chandrababu the actor.
He used to joke about the 'Jutka'.

You forgot to mention the onions when you saw the film the second time.

PS Hey, who's been using my identity?

Lovely nostalgic post Raji. Makes me want to see them all over again.

That was a great tribute Raji - I have also admired Sridhar's films -all of them classics . I did not know he died. He portrayed the angst of unrequited love so movingly in Kalyana Parisu and Nenjil Oru Alayam. And as for Thennilavu and Kadhalikka Neramillai .....ahhh!! The music of his films was somehting else as were the song picturisations. Devika's plea to Muthuraman in the hospital room " Sonnahtu nee thana..." stark and soul shattering

Raji, (do I sound like a parrot :) ) but that song immediately got me humming... so audio clip? Here it is:
http://psuseela.tripod.com/sus13.ram

What you have singularly omitted to
say is how ingeniously AM Raja set the tunes and it was his music nay the simplicity of it that made even a five year old like my nephew then to hum. There was a reason why AM Raja and not the established music directors then was used-the modest budget for the film which left not much for the music directors. For the very reason of limited budget, John Barry was used to set the theme music for Dr No, the first James Bond film although he generously credited it to Monty Norman.

There is background to the success of Sridhar.
In 1950s, artists of Telugu extraction created films of social genre (before then films were historical and those that touched social issues conveyed complex messages)with which common people can relate to and these films often conveyed simple but powerful messages. LV Prasad produced the film 'Missiamma' in 1955 which was a runaway success. Again this film appealed to both young and the old. I did not see this film, those were my highschool days in Mysore but my sister did and she liked it. Gemini Ganesh was the hero, and the director could easily relate to this attractive youngman who was a graduate and sans superiority airs one often found the actors of those days. AM Raja was the music director and again the songs were very hummable.
It was not a coincidence that Sridhar entrusted the music direction to AM Raja in Kalyanaparisu, and like LV Prasad he preferred Gemini Ganesan as the hero. Non-Tamil actresses like Saroja Devi and Savithri were preferred because of their eagerness to learn and ability to turn out good performances. Though Sridhar was born in Chinglepet, he was of Telegu extraction and in a way followed LV Prasad's footsteps.
There were other Telugu artists who were getting attention. P. Susheela, PB Srinivas and BalamuraliKrishna come to mind.
The history of Telugu influence was still felt at that time in Madras even after the states were created on linguistic basis.

boltthrower, and you are so good for my ego!

webradio, thank you for visiting.

Maiji, I should have been a film reviewer, yes.

Blogeswari, I know. Even now I feel none of the media has really appreciated him at this moment - except for DD Podhigai, which did a very good job.

Anonymous, I knew Sridhar was from Chingleput, I did not know this fact, and I wish I knew who you are, who knew my father.

Anonymous two, the rest of my comment is: "I was still moved to tears, but could not shed them because my wicked children mocked me, saying, “Dai, dai, Amma paruda ithukellam azhara” (Look . Amma is crying for all this.) :).

Swarna thanks for the clip I shall add it to the post for later visitors. :)

Mysorean, I completely agree with you. A. M. Raja's music played a great part in the popularity and enduring quality of 'Kalyana Parisu' - his first venture as music director. The story goes that a young script wrtiter and young singer were travelling together by train to Madras. The script writer, whose ambition was to be a director, promised the singer whose ambition was to be a music director, that if he ever directed a movie, he would make the singer the music director. And Sridhar, for it was he, kept his promise -when he got to direct
Kalyana Parisu', he made Raja the music director - the team continued with 'Vidiveli' and 'Then nilavu' also, but am not sure what else.

A. M. Raja's voice fitted Gemini Ganesan so well! I rather think that the music director of 'Missiamma' was Rajeswara Rao.

Many of these films like 'Missiamma' were made simultaneously in Telugu and Thamizh, with very often the heroine remaining the same,and only the hero changed. Gemini Ganesan's role was usually played by A. Nageswara Rao.

Happy Diwali to you, Raji.

I pointed out the parallel between
John Barry who was the real'tune setter' and Monty Norman who was on the credit as the music director, in Dr No the first James Bond film. John Barry was relatively unknown at that time, and those who heard the theme music of 007 in Dr No with the superb guitar twang recognised John Barry.

The rumour was that AM Raja was the John Barry and the Rajeswara Rao was the Monty Norman in Missiamma listed as the Music Director. But when the film Missiamma was released the film studios knew the music was the work of AM Raja, which made him acceptable to the financiers of 'Kalyananparisu'.

I would say that whilst Tamil films music scores by Tamil directors tended to be classical in framework in 1950s, it was the Telugu music directors and film directors who ushered in the new era of light music in Tamil cinemas, and to this end the contributions of AM Raja, P Suheela and PB Srinivas were important. It has to be said as I commented earlier, Telugu influence in arts and education was significant in Madras in 1950s even after Andhra Pradesh was created to the annoyance of a few including the DMK politicians who were heavily involved as syndicated dialogue writers for Tamil films.

Finally, it is significant to note the both Sridhar and Balachander entered film world through their playwriting skills. In Mid-1950s after the fall of Rajaji government, the Dravida movement was growing strong and Sridhar a Tamil Nadu born from Telugu stock (when the great Thygaraja was not accptable as a Tamilian, Sridhar had very little chance!) would have found it dificult to hire the two major actors then who were heavily into this movement. That was one of the reasons he went for G Ganesan and Saroja Devi, the former as I mentioned was broad-minded through his education and Gemini Studio links. Balachander faced somewhat similar problem although his mother tongue was Tamil, he was (is) a brahmin! Hence one can read into his tribute to Sridhar as his 'role model'. One would not notice the emergence of A Bhimsingh as a versatile film director with hits such as Pavamannippu and the rest of th 'Pa series'. The Dravida movement which was blaming Hindi zealots upnorth for all the problems would not have missed to notice how easily Sridhar was accepted in Hindi film circles in Bombay!