My brother sent me a link to an article on dictionaries that triggered off memories in both of us . . .

“Am I a walking dictionary?” my father used to ask when we asked him for the meaning of a word. He would point out to the bookshelf and say, “Find out for yourself.” And thus we were encouraged to use the dictionary from early on. A perfectionist, who liked everything just so, he would tick us off us for mutilating books with pencil marks or treating them roughly; the only thing he did not object to was a dog-eared or even tattered dictionary. “That shows you have been using it,” he would say, and not think twice of replacing it when it was beginning to fall to pieces.

A fascinating read it has been, and on-going still. I look a word up, maybe for meaning or pronunciation, and end up going down the columns at more and more. New words are often seen, recorded and put aside for future appropriate use. Words you thought you knew well, throw up more facets. Some words I thought I knew meant the opposite of what I thought - that is how I found several doesn’t mean many, but only more than two!

Roots and origins are explained and some dictionaries even give examples. 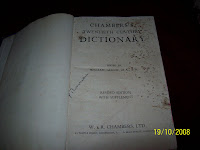 The old Chambers we have has interesting supplements like meanings of Christian names and foreign phrases. And if you just happen to meet an English aristocrat, and don’t know how to address him, why, you can simply look it up in the supplement ‘Correct Ceremonious Forms of Address’. You can even check out the Metric system here. It is well-thumbed, and has been bound more than once (several?) and is still a favourite. But, published in 1901 and revised in 1960, it doesn’t have many current phrases, let alone current technology. So we added a new dictionary that included those. And somehow or the other over the years , our collection (including gifts) has grown, and we now have five dictionaries at home (not counting the language ones). Apart from these, my mother likes to use her own lightweight dictionary to verify spellings before she fills in the daily crossword. 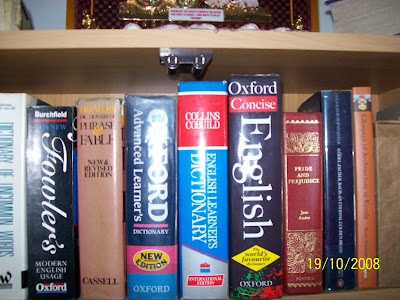 I like to read about the origins of words and phrases and found this book (not actually a dictionary) extremely interesting – Brewer’s Dictionary of Fable and Phrase (it belongs to my son, who won it at an inter-collegiate event). A trivia lover’s delight, it gives explanations and origins of phrases and has a lot of cross reference too, so you can lose yourself happily for hours in it.

One of the anecdotes in our family is about my father's cousin, who used to visit us frequently. If he found my father out, he would sit down to wait, and pick up the dictionary to read. I can now quite understand his fascination for it, but what made us laugh was that another of his favourites was the telephone directory. What lurking attraction drew him to that list of Sharmas and Varmas was beyond us, and made us doubt even his preoccupation with the dictionary.

No talk of dictionaries can be complete without mentioning Dr. Samuel Johnson, that ultimate lexicographer. A lady sailed up to Dr. Johnson at a party and gushed to him, “Oh, Dr. Johnson, isn’t it wonderful that the only word in the Dictionary where ‘s’ is pronounced ‘sh’ is sugar?” He answered politely, “Are you sure, madam?”

And the link my brother sent was : http://www.guardian.co.uk/books/2008/oct/17/ammon-shea-dictionary-extract-oed
Posted by RAJI MUTHUKRISHNAN at 10:12

Hello Raji !
Your text is long. I'll translate it and i'll come again for comment...

btw i got one of those phrase origins - this time its from the horse's mouth itself!! Oxford... will show it to you next time we meet.

you wrote this just as i was finishing up an article on a word or two - watch out for it...

Dictionaries are so important. Sometimes I wonder the need for so many words for an equivalent meaning. Probably required. Brainy matters... not of major concern to brawny people like me..!!!

A friend of our father once advised me to keep a Dictionary on my head so I would not grow any taller!!!

Raji,
I could relate to everything you wrote being an avid dictionary reader myself. If you can get hold of a copy, do read "The Professor and the Madman", a fascinating (true) story about the Oxford English Dictionary and how it came into being.
Kamini.

Rumour goes that the current Shankaracharya Sringeri has memorised the English dictionary from A-Z in his desire to master the language!! Now please dont ask me if it was Chambers or Oxford or Brewsters - I have no idea!

Web, hope you did not need a dictionary for it.

Maddy, looking forward to that.

Anonymous, have only read extracts of the book. Would you like to say who you are - your experiences in the jungle must have been terrible!

Kat, I respect your views.

Flowergirl - proves there are lexicon lovers!

Aunty, probably the poor man (your father's cousin) was just desperate for SOMETHING, anything, to read. I understand how he could have felt, for sometimes I have been forced to read the labels on medicine and cosmetic bottles for want of anything better.

Anonymous - I am also curious. You sound like an American veteran ?