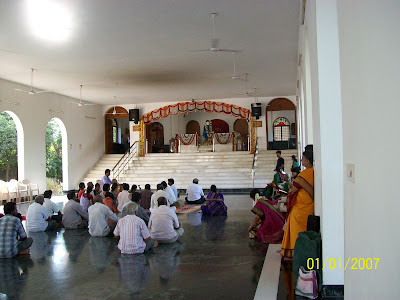 Last week, on Vijaya Dasami, when our van landed at Sri Sai Temple (in Krishnakarani village) on the Mahasamadhi Day of Sri Shirdi Saibaba, and unloaded a group of not so young ladies, we were taken for a group of devotees who had come in from Chennai.

That too, of course, but we were there in our capacity as musicians, a group of singers known as Gangamritham, trained and led by guru Ganga, to perform on the Mahasamadhi Day. This year it was on Vijaya Dasami, the tenth and last day of Navarathri, and also on a Thursday, a day special to Sai Baba.

We were highly pleased with the honour, and had been rehearsing diligently for weeks, squeezing in rehearsals between Navarathri kolu celebrations and visits, children’s exams and regular housework. We had also decided to dress in similar, if not identical sarees, and made time after one practice session to go shopping. We spent our time happily selecting, giggling and chatting like schoolgirls, before deciding on our choice - and here we are. 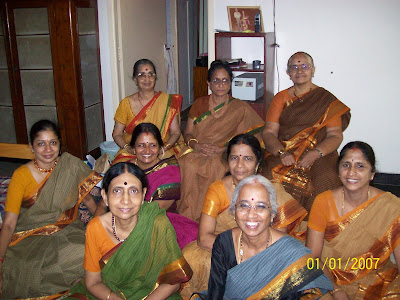 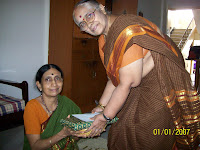 On Vijaya Dasami, the auspicious day to start all new lessons, we met at guru Ganga’s place and honoured her in the traditional manner. She taught us a new song, to signify the auspicious start. And we got into the van provided by our coordinator Usha Gopal, and picking up our accompanists, Usha Venkatesh and her son Karthik, set on the almost two hour trip. It was a fairly hot afternoon, and we were glad to reach our destination.

The temple (near Mahabalipuram) is run by Shirdi Sai Trust, and is set in a huge campus with spacious buildings surrounded by lots of greenery. 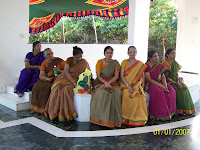 We waited in the huge hall where there was the life size image of the Baba, and where a bhajan group from Andhra was singing. The breeze from the nearby sea, barely a few yards from where we were was non-existent. But the hall was cool and airy.

We were served coffee before we sat down to sing, not on a stage as we had thought, but on the floor in the hall, where the bhajan group had also been singing. The listeners were behind us, so we could not see who or how many. We sang a few well chosen kirtanas and bhajans, not too long or heavy, each one dedicated to a different God. After the concert, which lasted for about an hour and a half, we heard some applause, and turning round, were delighted to see that the hall had filled up. Of course many of them were devotees waiting to see the aarathi which was to follow our concert, and so was a captive audience! 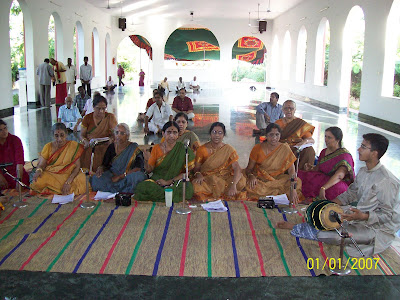 We were totally taken aback when after the concert, the priest came down from the stage where he was getting ready for the aarathi, and presented each of us with a ‘ponnadai’, a kind of shawl with golden weave, and considered the ultimate form of honour. More applause followed, and in my confusion, I forgot to tell our unofficial photographer Sudha to take a picture of the honour! We also got DVDs on the life of Baba and a nice picture, and a cash reward.

After the arathi, everyone present was fed a substantial, if not fancy, meal and we too partook of the ‘prasadam’, as it is called.

On the return journey, comparatively cooler for it was night by then, we were on a high, with the satisfaction of a job well accomplished, and feeling that our efforts had been well appreciated. 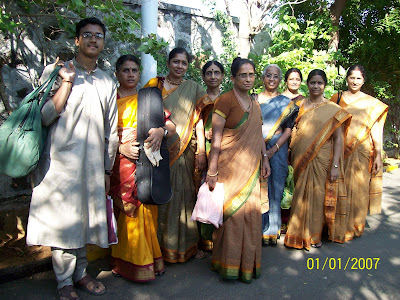 Forgot to set the date on the camera! The correct date was October 9, 2008.
Posted by RAJI MUTHUKRISHNAN at 19:39

Obvious, you all had a great time. Must have been a satisfying experience too. :)

Lovely experience. Lovely description.
Thanks Raji for displaying the pledge. I didnt know it could be done

Thank You Raji !
Your text is long, so I print it for translate...
Your photos are very nice...

I think that You had a good and great time...
I'comme again for another comment, when i'll finish translate all...

Sounds like a great day! The temple looks lovely and inviting!

As said, Shirdi Saibaba is my lord and my life!

btw, you all look so very in unison there..nice pictures too..

thanks! thanks again!
devika

Wish you more such opportunities!
Can you post or embed an audio clip? Salutations to your guruji and to Baba!

superb mam!! I am a BIG Baba devotee!! lucky u to have got a golden shawl

Feeling sad. Could you please wear the 'honour' at home, set the camera date to Oct 9th - and post that pic for all of us to see?

Anonymous said...
This comment has been removed by a blog administrator.
6 December 2008 at 17:18

Very impressive Ganga. Kudos to you and your team. For women life starts at 60.

Sai Baba has always believed that education is an effective tool for transformation.

Even in his subtle form, Swami continues to touch the hearts of the indigent people through the initiatives undertaken by His ardent devotees.

It is good to see people working hard to create smiles on the faces of needy people.

Even in his subtle form, Swami continues to touch the hearts of the indigent people through the initiatives undertaken by His ardent devotees.