A couple of days ago I went to a family wedding. Seated in the front row, this is what I got to see most of the time ... 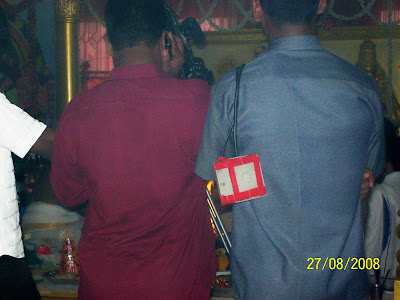 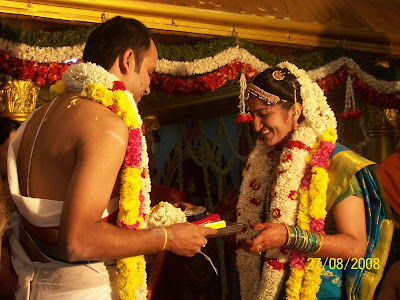 Our weddings are full of ceremonies and last well over two days, whittled down from the five day-ceremonies of yore. But celebrations begin much earlier and social get-togethers follow. Friends and relatives are invited days ahead and expected to participate in all events. For those who can’t, there are photographs and videos!

Videographers and their assistants – sometimes more than two pairs – stand in front of the dais where the marriage is being conducted, and manage to block everyone’s view of the proceedings. True, they have their job to do, and do it properly. But for those wanting to see the ceremonies live, and not a recorded version, it is frustrating. I saw people going up to the side of the dais to see the ceremonies. And because of this ‘blockage’, close circuit TVs and screens on both sides of the hall (in one instance, even in the dining section) display the ceremonies ‘live’!

Which brings me to my gripe. Are videos really necessary? They are hours long, and I have not met anyone who is really enthused over seeing them. There are bound to be interruptions too. No one has the patience or time to sit through hours of these videos, unless it is to check out the few frames they are in - “Can we fast forward the next bit?” Most of the video players are defunct now, and the videos have to be converted to CDs. You need DVD players, and even in the remote possibility that someone actually wants to see the wedding ceremonies, you need to have power, and some nimble young fingers to operate the remote. I have to confess I haven’t viewed the wedding videos of my sons more than a couple of times, but the photograph albums are almost worn out.

I suggest that the videography be done away with. Instead let there be more photographs, as many as you like, in black and white (they are really far more glamorous), in colour, in sepia, whatever. Let there be many albums – one for each ceremony, a picture to a page. The albums can be held conveniently and one can look at the pictures peacefully, at one’s own pace. Convenient breaks can be taken, without having to hunt through frames for the last one seen.

I took a quick poll among those present, and was happy to find that everyone I asked was in agreement.

When so much is being spent on weddings, the budget allotted to the videography may not be much, and scrapping it may not be a big saving, so that is not my concern. It is just that it is an exercise in futility.

Cross posted from Giving It a Shot
Posted by RAJI MUTHUKRISHNAN at 17:29

Well covered Raji, the topic on wedding videos. It sure isn't filmed like a movie-thriller and photographs are any day more fun to see.

You've beautifully captured the problem every attendee is facing...

And I would also like to lodge a complaint in this forum - everyone pushes me to the back or edge, when they film the handshake and subsequent teeth-showing-ceremony along with couple :-(

Perhaps the video wallah is one of those 'compulsory' freebies - when you make a deal with the caterer or the wedding hall you get one. It is painful for all concerned, as you say, but the pressure to please all can be big - and the pressure to give in to persuasive service providers, whom we're often better off without.

Some weddings are alright and have to be filmed like the Monsoon Wedding!

I won't argue for banning videos. What's at fault is the way it's taken, and arrangements made for it. With modern technology, there is no need for the cameramen to crowd around the dias. That should be banned. They can be a little away. Also, Kalyana Mandapams can have an elevated platform from where the ceremony can be shot.

I feel a similar annoyance when people take customer calls when making the customer right in front of you wait.

That was a good thought. And I do agree that videographers create annoyance to the friends and relatives gathered. But I don't think we need to do away with videos. Well edited wedding videos are a pleasure to watch. Last month, I couldn't attend my cousin's wedding. But when sent across the CD, I went thru each frame eagerly to see the ceremony as well as to have a glimpse of the friends and relatives after a long time.

Raji, while I agree with you - and I havent quite watched the wedding video of Darshini properly through- there are a few people like Resmi who do love to watch the wedding viedos.My father among them.
One use is you sometimes catch glimpses of people who are not in the photographs and whom you may have missed seeing altogether.
Two- as Gardenia says with perception- the pressure to give in to people is great. NO vidoe was waht we decided very early but we couldnt stick with it.

I agree, and I'd include a lot of other modern 'gadgets too'. I', often guilty of spending all my time trying to get good shots of my grandsons, rather that sitting quietly and just enjoying them!

A nice photo album stays through the life...and brings the sparkling moments of the ceremony..

than the video cassette or the CD that takes with the awful noice and trivias of the wedding...

not to say the nuisance of videographers at the wedding site..

Thanks everyone - I am glad everyone felt free to agree or disagree with my views.

You're absolutely right, Raji! Maybe the solution lies in altering the seating arrangement of the attendees (how about a stadium-style arrangement with the lowest rung for the videographer and his paraphernalia?)On the other hand a well-edited video is a pleasure to watch for the closest members of family and friends (but not when you're compelled to sit and watch XYZ's cousins' nephew's wedding video just because you happened to visit them!)
But what I just can not understand / digest is when someone gets photographers to record a funeral wake and get all the mourning family members to pose next to the dead person! Its the most macabre thing in my opinion. Personally, I would rather remember happier times.

I agree except that a cousin of ours was also taking video at our wedding and he has done a fabulous, fabulous job. He interviewed relatives and friends at our wedding and then cut it all down to a nice manageable size and for us it is a beautiful souvenir from our special day. So unless a friend or family member can make a nice personal video with lots of sound bites, hiring official videographers can certainly be done away with.