August 1 was the day of the eclipse. It was a partial eclipse here in Chennai, and was to be visible between 4.40 and 6 pm. As the evening hour approached, the till then clear skies became cloudy and there were rumbles of thunder. 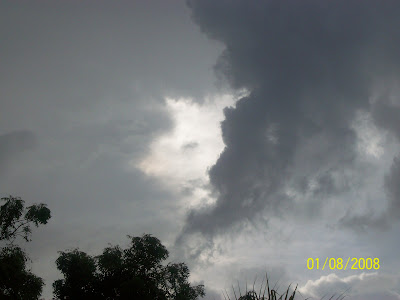 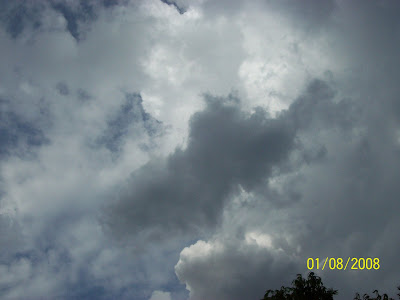 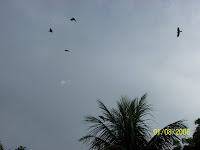 The crows and the parrots from the mango trees were agitated and flew about frantically, possibly confused at the earlier hour of darkness. The parrots homed in to the mango trees, getting beautifully camouflaged in the greenery.

What could have been a good view of the eclipse from our terrace was blocked by the clouds. I was disappointed. And after all that sound and fury, signifying nothing, it did not rain at all!

By the time the clouds had cleared, it was close to the end of the eclipse, and the sun was lower down in the skies. We could only catch a glimpse from between the top of the trees! 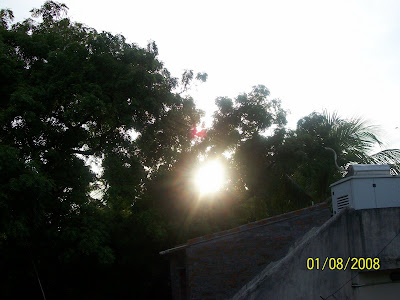 Posted by RAJI MUTHUKRISHNAN at 13:49

Lovely pictorial essay Raji ! Our office here in Worli is just across the road from the Nehru Planetarium and one could have walked across to view the eclipse from there with the special glasses on offer but I am afraid the work day was so packed I forgot all about it till I emerged from the basement office well past sunset ...so this was a real treat

I am reminded of "Ooty vera Uravu"

think the mood is captured best by the smallest picture. The light looks menacing and the birds are obviously flying wildly. We didn't get the eclipse at all in Australia so you at least saw something.

I think very often eclipses are accompanied by clouds..maybe it brings that kind of weather on?

Well I missed the eclipse. It was raining here in Bangalore. So thanks for putting in those snaps... :)

Was wondering why I was agitated frantic and confused on Aug 1st... Oh, it must've been due to the eclipse :-)))

I have always wondered why we take the eclipse so seriously from historic times, at our village people go indoors, shut the doors & windows and take a bath afte rthe eclipse is finished..food for thought,

Wow, the pictures are really dramatic! Thanks for sharing them with us.
Kamini.