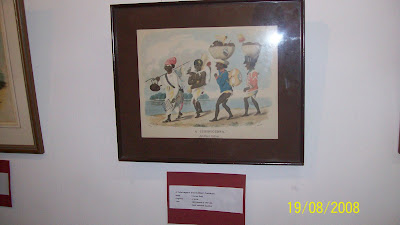 August 19. It is the third day of the Madras Week, a week of celebration, to mark the founding of this wonderful (it really was once!) city.

What started out as Madras Day, August 22, has now five years later, become Madras Week. The concept of marking this event was put together by a group of writers and heritage lovers like S. Muthiah, Vincent D’Souza and Sashi Nair. And celebrating the city at various venues and in different ways (heritage walks, talks, cultural exhibits, reading sessions are only some of the activities, culminating in the most popular Madras Quiz) has become the mode of expressing one’s love for the city. 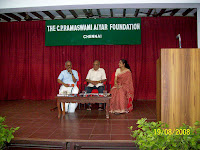 At C. P. Art Centre today, two different, yet associated events took place – one was the release of the book “The Early History of the Madras Region’ by Dr. K. V. Raman, and the other was the inauguration of an exhibition of V. Narayan Swamy’s private collection of Early Portraits of Madras – Etchings, Engravings and Aquatints.

Both events were clubbed and released/inaugurated as one by the custodian of Madras Heritage – S. Muthiah. In his speech he decried the disappearance of social studies from school syllabi, so essential to the forming mind to learn appreciation of heritage. He also regretted the mindless demolition of heritage buildings. He pointed out to the beautiful hall the meeting was being held in – part of the magnificent house of C. P. Ramaswami - and wondered what might happen to it, were it not for Nanditha Krishna, Hony Director of C. P. Ramaswami Aiyar Foundation. I will need a separate post to describe that place.

I have yet to read the book, but am told it is of great interest to historians and history lovers, remarking on a period long before the British came to Madras. Raman was professor of Ancient History and Archaeology at the University of Madras. The book is actually a republication of what was first published in 1959.
More details on Sashi Nair’s blog. 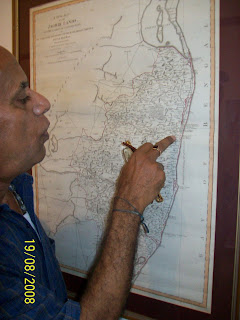 Of greater interest to me was the exhibition of the prints, mainly because Narayan Swami, who is part of our wide family circle, had mentioned that they would be on display to coincide with the Madras Week. The prints and etchings are really fantastic – and they have been preserved with so much care and affection. His wife who was present (he was not on account of another engagement) told me that it was a collection made over more than 25 years – and only part of it was exhibited. 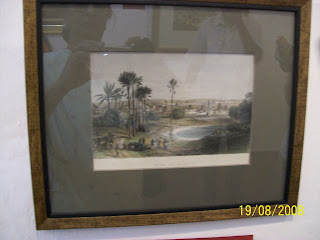 The brochure that goes with it explains a lot. Do you know the difference between an etching and a lithograph? The last couple of pages give useful and brief explanations of these terminologies and others. What caught my imagination was the print of the Cuisinegerra (the cook). There is so much life in it. (See picture at the top) Narayan Swami has described him in his blog as well. Sashi Nair’s blog has a vivid description of this exhibition too, with more pictures. (I still haven’t mastered the art of taking photos on framed pictures without the flash showing!) 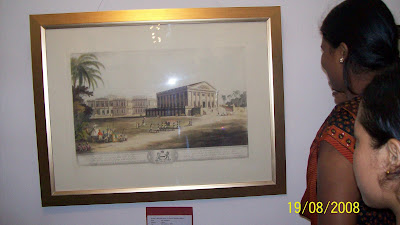 I am thinking of a time that was when the road to St. Thomas Mount(which is why it is called Mount Road) from what was once the Governor’s residence (behind what is now called Rajaji Hall - then the Banquet Hall)) being just unpaved road down which horse drawn carriages would roll.

Pictures in order from the top
1.A Cuisinegerra and Soldiers' Cookboys by Charles Gold, 1802
2.A map of the Jahgir lands of the East India Company as at 1794.
3.'View of Madras' in the 1820s, artist unknown.
4.Government House and Banqueting Hall, by architect John Goldingham circa 1800.
Posted by RAJI MUTHUKRISHNAN at 07:38

Great blog! thank you for posting, I've bookmarked this for future reference.

Raji, it all sounds wonderful. Wish I could be there. Great you are so much a part of it all.
I still say Mount Road and I think one can date people by that.:-)
And 'Madras' of course.

Good work, Raji. Good to see quite a few stories about Madras Week this year.

Try attending one or two other events and soak in the old Madras feeling till it lasts!

'Madras Day, Madras Week, Madras this and Madras that..' Haven't you had a visit by DK and DMK annas and thambis for committing this sacrelage?!! If there is one city which personifies Indian decadence it must be MGR's, Jayalalitha's and Karunanidhi's Chennai where narrow linguistic chauvinism reigns supreme and worse than that, it is exported to all parts of the Globe from here! Look at what Kannadiga Rajanikant is delirious about!

I have been to Madras many times, even after "it became Chennai", but never stayed there for long. Probably if I had got through in the intereview for a newspaper, may be I would have been there. One thing that I have found is that like Mumbai'ites, longtime Chennai'ites, find it difficult to manage elsewhere: so much is the longing the city extracts from its citizens.

I have been to several shows during Bangalore habba (December each year) in '03 and '04. We used to start out early evening and try to cover the events at Cubbon Park, Ambedkar Bhavan and MG Road. I felt they were quite well organized. Madras week is new to me, hope I can make it sometime.
Also remember, there are so many different types of 'citizens of the world'.

wonderful post... very informative with all those details and great photography. but i dont know why two lil buggers (Mysorean and Citizen of the World) are bugging world peace by eavesdropping on nice blogs and playing JOKER :)

It's all the Dark Money Knight's effect i think :)

Pradeep, you got it in a nutshell - long time dwellers wouldn't exchange this city for another.

Kallu, Hantan, the name may have changed, but it is still Madras in spirit.

Madras nalla Madras (or should I say Metras nalla Metras )