Yesterday was my birthday. Another one, sigh! More grey hairs, more wrinkles and more creaking joints. I was not sure I was looking forward to it. 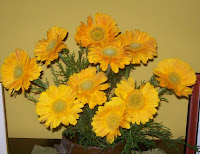 The day however, began with a lovely surprise. My mother had arranged for a bunch of flowers to be delivered first thing in the morning. She had quietly sent a note via our helper to the florists next door with the request! A bunch of golden yellow gerberas – grown by tissue culture.

As the day progressed, family and friends, including my teacher from our Pondicherry days, called to wish me, and the morning whizzed by with e-cards and e mails with wishes. It did feel nice to be remembered and a warm feeling enveloped me.

The first call was from Sriram. We got round to discussing the last birthday when we were with him, and the one before that here in Chennai, for which he had arranged an elaborate get-together of family(including one brother, one sister, and the other’s family) and close friends. A 60th birthday I suppose, justified the celebration. The surprise was when Sankar, Jaisri and Arundati, who were supposed not to have been able to make it, turned up quietly. It was great fun, and there was so much happiness! The previous two birthdays, as Sriram reminded me, had been spent at Sankar’s place. And always there was a cake, if not ale. 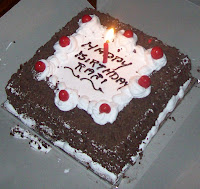 This year the birthday was low key, as we had not planned anything, bar ordering food. Or so I thought. At about 7 pm, the group of youngsters with whom I share the interest of quizzing (mostly online) trooped in. I was pleasantly surprised, for I was not expecting them. There was more - they had brought a delectable looking cake with my name on it and a single candle. They lit the candle and made me blow it, and even sang Happy birthday. I was overwhelmed. 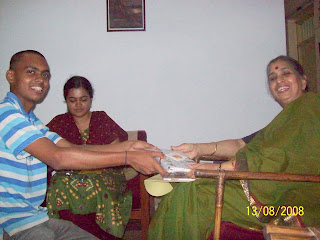 They stayed on to have tea and snacks, and brightened up the day considerably. Before leaving, they gave me some gifts as well. My regret was that I did not have anything to offer them but the snacks and tea. 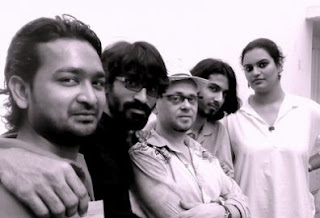 One of the gifts was a copy of the Indian edition of Rolling Stone, because it had my niece Parvati and her band, Emperor Minge, featured in it – and just because they had heard me mention it! 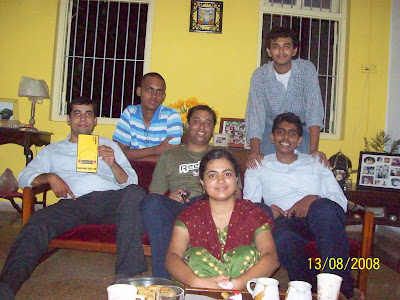 Posted by RAJI MUTHUKRISHNAN at 19:05

had great fun putting the whole thing together...

HAPPY BIRTHDAY TO YOU!! HOPE YOU HAD A GREAT BLAST!!!

Happy Birthday to you, once more!

Glad you had a nice B'Day. Very nice of your quizzing buddies to troop by and liven up your B'Day.

Oh there was ale alright. Lots of kinds.

A belated happy birthday to you, Raji. And you richly deserved all those lovely surprises.
Great to see Parvati's picture in Rolling Stone - very impressive, indeed!
Kamini.

Late by a couple of days but hope not too late to wish you. The cake looks good! Happy Birthday!

Many many happy returns of the day :-)
have fun!!!

Thank you everybody- makes me think I really asked for it - the wishes, I mean!
:)
But I could not let such a beautiful gesture go unremarked. And I did have a great day.

I knew my photo wud come up on this really famous blog..
You made our day aunty..
Never celebrated anyone's b'day b4 with such fervour, and i'm quite looking forward to the next one.. cha one whole year to go, cha..
thanks a lot for the photos aunty :)

Cool... Well, I don't generally celebrate b'days and stuff (esp. my own), but I certainly liked what KN and co. did... A surprize is a surprize indeed!!!

Happy b'day once again.. Perhaps I can drop in next year for your b'day (Hmmm.. Lemme keep that as a suspense)

Belated birthday wishes. sigh! I wish I was there

Thanks for all the comments, fellas. Team work - thats the key here... each of us did their bit - in the case of Hantan, it was playing Politician (in the photo)!!

Hope you are doing fine. I am back on the blogosphere; and with a new blog. Please visit it and also update your blogroll.

As an old man - I bless you with many many more wisdom hairs, twinkling eyes and sizzling blogs :-)

Raji, though belated, please accept my Birthday Greetings. May there be many more happy returns of the Day. All the best.

belated happy bday!! you sure are still young at heart....love ur blog....I dont blog half as well as u do....but do take a peek!

A birthday , a day before country's birthday must be great! Hope you had a great one. Wishing you all the best.

Dear friends, thank you all so much! It is worth getting older just to get wishes from friends like you. Makes me feel so warm. God bless you all.