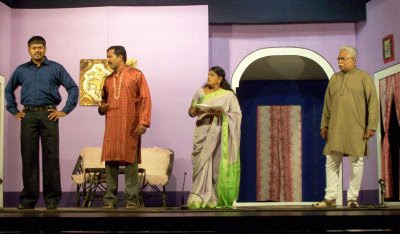 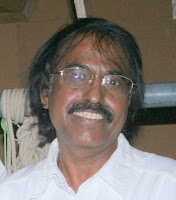 All told it was a good play. The only glitch was the air-conditioning in the hall of Narada Gana Sabha. Either it was not set to the right temperature, or it was malfunctioning.
By the time we got up we felt acutely the lack of fresh air, and were drenched. ‘Summer festival living up to its name, I suppose.
Posted by RAJI MUTHUKRISHNAN at 10:55

Nice post, Raji. Yes, Madras is culturally alive all through the year, there is always something for everyone.

Looking at the actors in the snap shot shown in the photograph, one cannot help feeling that they look so amateurish.

Long since I watched a play, but in summers, especially in Delhi, I prefer to stay home,

back in trivandrum I used to have an yearly treat of drama, ganamela and dance for three days...during the temple festival near by...never had to go anywhere...sitting at my window I could watch....here, its all so far, and I get lazy :)

October to mid Feb is the time I enjoy moving outside,

I am glad that people are realising that misogynists too are nice people.