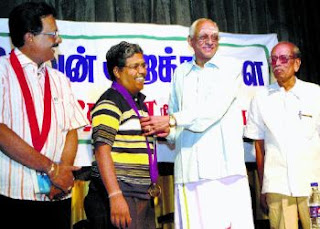 Another sizzling scorcher in the city yesterday, and I was only too happy to find refuge in the air-conditioned Smt. Sivagami Pethachi auditorium on the occasion of the Devan Endowments award ceremony. This programme is an annual one, organised by writer Charukesi, who is the Managing Trustee.

Any self-respecting Thamizh weekly reader knows who Devan is – the famed humorist, whose writings (in Ananda Vikatan, mainly) raised a laugh in the hearts and hearths of many. Though he died in 1957, his name has lived on....Many remember him for the character of Thuppariyum Sambu, who sort of bumbled his way into solving mysteries (a forerunner of Inspector Clousseau, maybe?). The face of Thuppariyum Sambu was immortalised by artist Gopulu, who drew him just as Devan had described him – with a sharp nose, a balding head, a weak chin, along with a generally vacant look. It was most touching to see Gopulu present on the occasion, and to hear him say to a friend how he and Devan were inseparable in those days. Kathadi Ramamurthi, who had played the character on stage, was also present.

Devan Endowments was formed about thirty years ago, and the trust has been honouring writers and artistes with medals from 1997. This year the Trust honoured two young dramatists – C. V. Chandramohan and S. Ananthkrishnan (Ananthu), who have been making waes with their offerings. R. Krishnaswami, secretary of Narada Gana Sabha, presented the medals, and talked about 'Stage Plays - Past and Present’. It was most interesting, for the speaker clearly knew what he was talking about. He traced the history of the Thamizh play from 1890, when Pammal Sammanda Mudaliar and V. V. Srinivasa Iyengar wrote plays and made them decent enough to be performed in public. Earlier plays, he said, used to be rather vulgar. Their sources included Shakespeare and Moliere. He outlined its growth of Thamizh drama through V. C. Gopalaratnam, - Krishnaswamy, who is a lawyer, said that he had also acted in plays presented by the Lawyers’ Association many years ago with him - Nawab Rajamanickam, to Y. G. Parthasarathy and his writer Pattu – who gave a clear definition to Thamizh drama - and others right up to the time of K. Balachandar and Cho, which he termed the golden period of Thamizh drama. He felt the current crop of dramatists should include some relevance and substance to their plays, and not just write one line stories for their one-liners.

This was followed by the presentation of ‘Natta Kal’ by Indira Parthasarathy. A short play, it sought to present the theme of finding one’s god in oneself . The story of Poosalar of Thiruninravoor, for whose sake Lord Siva decided to forego the grand kumbabhishekham planned by the king, was presented by K.S. Nagarajan’s Kalanilayam. When the Lord appears to the king to tell him he has to be present at the kumbabhishekham of another temple built by Poosalar, the king decides to go there. And is surprised to find that Poosalar is a poor Brahmin whose temple is in his heart.

This theme was foretold in the prayer song - an M.L.Vasanthakumari classic from the film ‘Thai Ullam’, as Charukesi pointed out - by Sikkil Gurucharan. Another reason I was glad I went - Gurucharan sang divinely, and looked good, too!

As we came away, I could not but help think - Mylapore is certainly the cultural hub of this city. So many sabhas, all situated in this area. Almost all the dramatists, actors, artistes, musicians and dancers, almost everyone has a base in the Mylapore area. Devan lived in Mylapore, and so do Gopulu, Kathadi Ramamurthi, Charukesi, Sikkil Gurucharan, and Cho and the late Sujata, the first two recipients of Devan Endowments….
Posted by RAJI MUTHUKRISHNAN at 17:19

mylapor is the cultural hub of CHN yeah.. wish i get to buy a house there sometime so as to share your feelings, but with real estate prices racing the speed of light i think i need to wait for a long time b4 this dream is realized
and looks like all the ppl u mentioned are way beyond my time :)

Nice to see another nice post, Maami. Thuppariyum Sambu, I remember this character played out by Nagesh in Motor Sundaram Pillai, one of my all time favourite movies :-) Mylapore, looks like the equivalent of Malleswaram in Bangalore!!! You certainly are keeping yourself busy :-)

Great stuff. I think we do little in the way of flaunting our past riches. We grow up in these parts blissfully unaware of those who have passed before.

Very interesting post Raji, and vividly shows just how vibrant Madras is. Nice to read of your active life!
Kamini.

I suggested about Devan a few blog postings back. I think you may have to do a bit more serious research into Devan writings. He was not merely a humourist but his novels exposed various human failings like Dickens.

Mylapore was also the abode of Devan's boss S.S Vasan, the proprieter of Ananda Vikatan and Gemini Studios, a self made man who supported various charities.

During my last visit to Mylapore way back in 1970s, the place appeared to be full of dirt and filth to my Mysorean eyes (At least in those days, Mysore was arguably the cleanest city in India). It had probably one of the highest human population density and even in those days the rented accommodation was beyond
the reach of ordinary mortals. A relative of mine who went abroad for a few years then had to keep on paying the rent on his house in Myalapore for 3 years even though his family were not occupying it during those years.

Your active life is definitely giving us some interesting reads. :)

Hantan, you can always catch up with these people by reading about them. They, among others, are part of Mylapore's history, and have shaped it.

Anonymous - True, such events are reminders of the people who made Mylapore.

Guru, thanks for stopping by. Now that is a good idea - do research on Devan. I would too if someone could give me a grant! :-)

Why grant to do some research on Devan's work. I am not asking you to produce a thesis which is a critique of Devan's work. Devan was not a prodigious producer of novels. A single novel like 'Lakshmi Kataksham' should be suffice to show that he was not merely a humourist but a deep observer humans and the society. He used humour with great effect to
qualify satire.

Is an English translation available?