MADE TO MEASURE .... AND TREASURE

A look at the picture of a young boy and girl circa 1947 interested me deeply. They were wearing clothes that today would be totally archaic, yet to me they looked sweet and smart. The boy was wearing shorts held up by straps, and the girl a frock (does even the term exist today, I wonder!) with Peter Pan collar and puff sleeves. 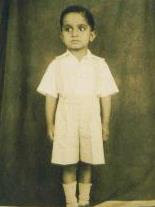 The children could have been my sister (or me) and my brother(see photo). We were always well turned out by my mother. Both she and my father were very particular about keeping us well groomed. Our hair would be oiled and neatly parted. The girls would have the hair plaited, if long, and the boys have it combed just so. And the shoes so well-polished and gleaming – my brother used to brag that his shoes were the shiniest in school.

Getting new clothes was a thrill indeed. No ready made clothes then. In Pondicherry, where we spent part of our childhood, my mother found a good tailor, Velayudham. He would come home, the inch tape round his neck and scissors in hand, to take measurements and instructions, carry away the uncut fabric and model clothes wrapped casually in a newspaper. He would bring them back tailored, wrapped in another newspaper. His visits would raise extreme excitement, because we were eager to see how the dresses had turned out. Mine were usually pavadai (long skirt) and blouses – my grandmother felt at ten plus it would be indecent for me to wear short skirts. The pavadai could haven no variation, but the blouses did – different styled necks and sleeves. I showed scant interest in how my brother’s clothes turned out. 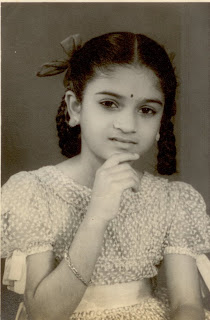 But my sister was only six, and her frocks were each made differently. My mother would patiently explain to Velayudan how she wanted them made, and he would listen earnestly. He would stand there in his white dhoti and not-so-white shirt, the collar pulled back from his neck, and a handkerchief tucked in there, the full sleeves folded up to his forearms, his body language exuding earnestness. Sometimes my mother would have the patterns taken from magazines. Nora and Tilly were the cut out paper dolls who would appear every month in the magazine ‘Woman and Home’. Their frocks were pert and pretty, and these patterns were copied most often. I am not sure, but I think my mother used to get the fabrics as close to the patterns shown in the pages. I remember my sister’s collection of frocks hanging neatly in a big cupboard with a lot of hanging space, where the starched dresses could remain uncrushed. Her frocks were quite the talk of the town then. Sadly, not much photographic evidence of them remains, but here is she in one of the frocks.

By the time we left Pondicherry, my younger sister was born and three months old. To Velayudhan was given the job of making her clothes. My mother gave him a bundle of many pretty pieces of printed fabrics - some were gifts, and others that she had chosen. She gave him the ultimate compliment of designing them himself – the only condition that he made optimum use of the material. He stood there, with his eyes large and bright, his sheepish expression even more sheepish as he accepted the honour. He returned a few days later with the dresses wrapped up in a newspaper – and we all went ‘ooh’ and ‘aah’, over the cute little dresses in varying sizes he had created. I realise now he must have been only in his early twenties; to me then he was an ‘old man’!

When we left Pondicherry my baby sister had a wardrobe large enough to last her a year.

We had also acquired a sewing machine – presented to my mother by her brother. This later became my inseparable companion. Velayudhan’s mantle fell on me, and I enjoyed making pretty dresses for both my sisters. Here is my younger sister in one of those. 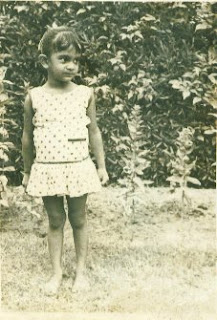 After I got married, my husband bought me an Usha pedal machine, and that too I used to a great extent, making my own clothes, and my sons’. I could not do much by way of creative tailoring for them, but I did manage to make some interesting shirts - and continued to till they were old enough to protest.

After many years, when my arthritic knees creaked even more than the pedals, we exchanged the machine for an electric one – it is now 15 years old, and I use it only to make my blouses, and do some random repairs.

The picture that set me off - Terry Fletcher and his sister.
Posted by RAJI MUTHUKRISHNAN at 10:24

Oh Raji and all the sewing you did for my wedding - all my sarees had perfeclty matched blouses , matchlessly sewn by you on the old Usha - i can never , ever forget that one month of frenetic activity between my engagement and the wedding day ....

Full of atmosphere, and full of shared memories. And so well written and charming. I remember that machine in the back verandah. The transistor would play to the accompaniment of the machine. I rememeber wearing new frocks to all my friends' birthday parties - how quickly you'd turn them out, and how neatly Viji would finish the hemming.
The tailor in Pondicherry decided what the baby would wear, is it? And the only choices you had were variations in necklines or sleeves, while Viji got all the fancy stuff! Ah. That explains a lot. :-)

You certainly picked up where I left off, as you said you would. Congratulations.

Great post. The comments are even more touching... the exchange of notes between sisters after sooo many years... revivng the memories.

I was right about the positive butterfly effect. :)

I wonder if you would post a picture of the tailor.

Hi, This is a really nice piece. I will keep a copy of this to show my kids, who wont accept anything other than a "weekender" or "Zapp Kids" or "G&J"...Shopping for kids has become a major challenge nowadays!

One feels tense these days watching the womenfolk at home fuming at undelivered blouses and churidhars.. and whenever it's delivered, invoking unceasing complaints... "it's tight here, loose here, I can't wear this for the wedding... "

Admire you Raji, for churning out pretty dresses for your Sisters. Ladyfolks should learn from you :-)))

Such a beautiful piece, Raji, and the comments from Viji and Gowri brought to mind the sisterly banter in Little Women. And the photographs are just priceless!
Kamini.

Kamini and Indrani - yes sisterly banter, indeed, and Kamini nice to think it reminds you of 'Little Women'.

Sory Anil, no pics of the tailor, unfortunately; actually there weren't many photos of those days.

Kat, we all belong now to the 'too tight, too loose' brigade!

Vidhya, nice thought, but I don't think the kids are going to relish it!!

Harimohan, lucky you to have had your mother make your clothes!

fascinating trip back to yester years - two things came to my mind - standing in one of the bigger rooms of our tharavadu house and looking at similar pictures featuring dad, mom, uncles, aunts...and thinking - will ours come up one walls like that?

and the sewing machine - just two weeks back we picked one up and i was remembering the singer one my valiamma had - where she had to spin with wheel with a handle on it.

Nice post! Though I can't say I share any of those memories (it seems to have evoked a lot of memories), it's nice to see those cute pictures. The poses seem sooo innocent--hardly see poses like that anymore, eh?
I have a pic of Vijay and his family, decked in shirts and shorts (drawers??) cut from the same cloth :)

Maddy, Gurooji - yes these pictures do evoke memories of the age of innocence, no?

I subjected my youngest brother also to some of my sartorial experiments - (un)fortunately no photographic evidence remains.

What a lovely and moving post. My prayers and blessings to you. Love Raji's Ramblings!!!

It brought back lovely memories of Women & Home, Pins and Needles, Women's Weekly and al those needlecraft magazines we used to get.Now it is like a dream. Beautiful article with freat imagery!

Suguna, thanks for reading. 🙂