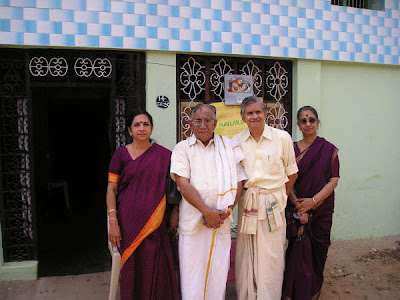 To go to Thiruvaiyaru during the aradhana was a boon. We went round the small town looking for the street where he lived. We were directed to a house, and horror of horrors, we found that reconstruction was going on - barely finished floors and walls, and open stairs. At the centre of what might have been a hall was the saint’s picture with a lamp burning.

The old house had been knocked down totally in the name of restoration and renovation, and the on-going construction looked like any other modern average house, with staircases leading upstairs.

Swallowing our disappointment and rage, we looked for someone to explain the atrocity.A gentleman of the neighbourhoood explained that the organisation which was maintaining the house felt that it needed to be restored. And had gone ahead and demolished it. An avid music lover had protested and taken the matter to court, and a stay order was given to halt construction.

But that too seems pointless – what is the use of a half-built house to show that this was where Thyagaraja Swami lived? The neigbour said that the place was still sacred, for that was where Rama had come to Thyagaraja.
The people who lived next door told us that the house they lived in was Sri Thyagaraja’s brother’s house.

The house had been partitioned because of the brother’s inability to live with a person who he considered was wasting his time in prayer and music. We found that the house was maintained beautifully, with tiled floors and painted walls, but with the old architecture intact. There were short and solid pillars supporting arches. A wall running the length of the house was pointed out as the wall that had been built as partition of the two houses. Picture shows us in front of Sri Thyagaraja's brother's house.

The street was celebrating the aradhana in its own way with prayers and homams, conducted by the families of the direct disciples of Sri Thyagaraja. Though we were total strangers, they invited us to eat lunch with the other neighbours at a wedding hall in the street.

We did, and found to our pleasure and surprise that there were friends and several aquaintances among the organisers. The lunch was just right – not too sumptuous, and not meagre, either.

Doctor JB is the ultimate music lover. His interest is matched only by his knowledge. He and Bhama attend many concerts and also listen to music avidly at home. Many musicians are known to them, and I was impressed to see how many of them came up to them and greeted them at the festival.
Posted by RAJI MUTHUKRISHNAN at 10:06

Pity about the house - I am tickled by the image of the wall inside the brother's house serving as a partition - reminds me of the 'Baaga Pirivinai' school of films!
Again, the small town experience wins!