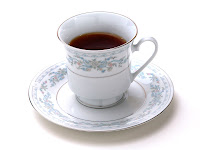 A friend's post triggered off these random thoughts. For tea is not really my cup of tea.
A good cup of coffee is what I relish. But tea is what many swear by. It is the undisputed pick-me-up of the multitude.

Until my sister married the then Assistant Manager (he is the Manager now) of a Tea Garden, as the estate is called, I did not really know much about tea except that it is chai in Hindi, theyilai in Thamizh and chaya in Malayalam.
Malayalis are an enterprising and ubiquitous lot with their little chaya kadas (teashops) sprouting everywhere. Stories of how Neil Armstrong found a Malayali and his chaya kada as soon as he landed on the moon abounded in the late 1960s.
My sister now tells me that some tea is sold for 10,000s of Rupees a kg!

Making tea is a fine art. The teashop-wallahs follow their own method of keeping water and milk (with sugar) boiling in separate kettles, and adding tea leaves to it, I am told. No sugar free tea for diabetics here.

When my children were very young, I used to make tea for my college going nieces who lived next door, following their recipe. Add the required amount of milk, tea and sugar to the water and boil it all together. Strain it and drink. It was not too bad, I felt as a a non-tea drinker. And if you added some grated ginger and cardamom to it, why, it was quite palatable.

Last summer when I was in New York I found that the coffee shops in places like Barnes and Noble had on offer ‘chai’ and discovered that it was quite a hot favourite there – the chai has some spices to pep it up, and tastes suspiciously like the tea I used to make.

In England, the promptest solution to any disaster is the cup of tea. Or ‘a cuppa’.
The accepted recipe is to add a spoon of tea per person, plus one for the pot, to the tea pot, and add the boiling water. It is allowed to brew and then strained into cups. Unfortunately I found that the brewing period cools the tea. Adding cold milk to the strained tea, only speeds this drop in temperature, and the resultant pallid and lukewarm beverage can barely warm you. But there you are, to each his own. Still, they always have a marvellous collection of muffins, tarts and cup cakes to go with the tea, which then becomes a feast.

The high tea is a very British concept – it is a meal in itself served late in the afternoon or early in the evening, where tea is also served – maybe incidentally?

When my then to-be-brother-in-law was visiting, I offered to make him tea, and went about it in the way I normally did it. He, to put it mildly, was horrified, and considered it a sacrilege that tea leaves should actually be boiled. He then went on to show us the correct way tea should be made.
Place the tea leaves on the tea-strainer, and pour boiling water over it, and collect the tea. To this one should add milk or sugar to taste, he said.

The finest tea is to be found in the manager’s house, certainly.
Posted by RAJI MUTHUKRISHNAN at 15:27

Email ThisBlogThis!Share to TwitterShare to FacebookShare to Pinterest
Labels: Tea

Raj, you opened up the big debate again!
'Molly my sister and I fell out
And what do you think it was all about
She loved coffee and I loved tea
And that was the reason we couldnt agree!'

How about this then -
"My wife and I lived all alone
In a little log hut we called our own
She loved gin and I loved rum
I tell you what, we'd lots of fun!"

Little Brown Jug
Polly Wolly Doodle
Camptown Ladies
Hey Ho, Come to the Fair
And so many more, all thanks to Mother Peter at Cluny's.
Nice walk down memory lane.
It is 4:20 PM hear on a dreary day and shall have a cup of green tea. Something I have gotten to like since our trip to New Delhi in November -- obviously as per Mohan's style of making it!

Aah! The tea story!
Brough back memories of endless cups of tea consumed in the company of friends, and fights over who will make tea for all! And how I, inexplicably, changed over from coffee to tea, unprovoked, in the tenth grade.
This fast life, and (mostly) inertia, have morphed my tea into a microwaved product, but my love for tea remains intact.
Thanks for this wonderful post!

oops my young colleagues are wondering "what went wrong with her now ?"
am grinning from ear to ear and huming ha ha ha you and me all day !!!

i thought i would leave a comment on this lovely steaming tea post, but it looks like the mere talk of tea has brought about a poetry contest out here :)

The occupants of the manager's bungalow are flattered to know you think the best tea is made there :)
... read more about it onhttp://seventhchords.blogspot.com/2006/05/visitors.html

do remind me to tell you of my real life experience with a malayali chaayakada and chaayakadakkaaran in a truly God forsaken place en route from Phuntsholing to Thimphu, in Bhutan....

or probably you can read about it in my blog, if and when I get around to starting one.... probably more of a when rather than an if....