WHERE SRI THYAGARAJA WAS BORN

We just had to stop at Thiruvarur too, the birthplace of the Mumoorthys - Sri Thyagaraja, Muthuswami Dikshithar and Syama Sastri - of Carnatic Music. Thiruvarur is about 40 km away from Thanjavur.

Everyone knows about the Thiruvarur Chariot (theyru). It is said to move so slowly that it has become a simile in Thamizh – as slow as the Thiruvarur Theru. It is used so unconsciously that very often one forgets that there is a temple attached to it! 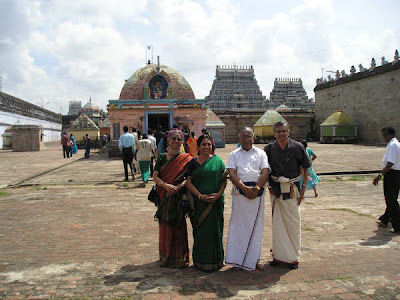 And what a temple!
I had no idea of the vastness of this temple and its grandeur. With a lot of renovation work going on, parts of the temple are a bit cluttered, but we could not fail to be impressed by the majesty of the temple. The Lord at this temple is Sri Thyagaraja Swami. Ah, that then was the explanation for the composer saint to be named so, we realised.
He is also called Vanmeekinathan, because he was found under an anthill. (Remember why Valmiki is called so?). Apart from the Goddess Nilothphaladevi, there is a separate sannidhi for Goddess Kamalambal. She is the inspiration for the navavarnas composed by Muthuswamy Dikshithar. 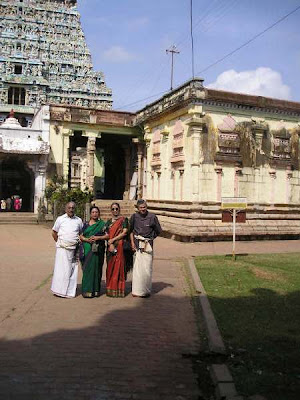 The whole courtyard of the temple is dotted with little shrines, each one housing a shivalingam. Stories abound about these lingams, and I was told that altogether there are 108 lingams at this temple, including the ones worshipped by Shaneeswarar and Nalan. Another interesting facet pointed out was the idols of the navagrahas were all standing in a straight line worshipping Sri Thyagarjar. Usually they stand facing different directions. 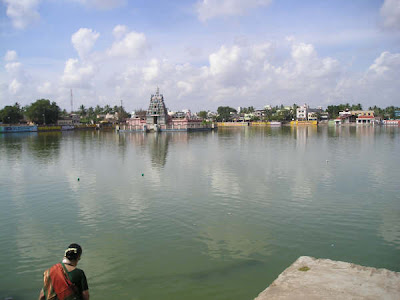 Behind the temple is a huge tank filled with water almost to the brim –this is called Kamalalayam. To me it seemed much larger than our Mylapore tank.

When we went looking for the house that Sri Thyagaraja was born in, we had to ask directions several times. 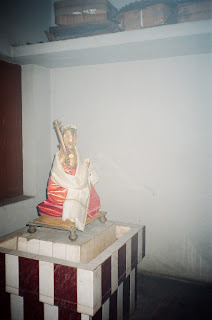 In each instance the answer was the same at first – they invariably pointed to the temple. It then struck me that to them first in importance was Thyagaraja Swami. The musician saint came only a distant second.
This little house has been well maintained with a caretaker in charge. A board outside clearly indicates that this where Sri Thyagaraja was born. Unfortunately for us there was no power inside the house, and we could only see in darkness the little image of the composer (see picture) and the pooja pictures in the room. The lady there graciously gave us thamboolam and fruits before we left.

I could not but dwell on the hospitality of the smaller towns.
Posted by RAJI MUTHUKRISHNAN at 10:42

Beautiful!
I fell in love with the place when I went there during the aradhana a few years ago, as part of a film crew's scouting trip. Second the hospitality of smaller towns -- we gatecrashed into the house of a resident, were given free food and board, all with a smile!
You brought it to life for us!

was there last year to try to find my long lost ancestry... :) great place, good temples and magnificent gopurams :)

Lovely pics- esp you at the tank.
Small towns win!!! Hooray for our small towns - do visit mine.

Some more memories of our visit to Thiruvayyaru .
When we went to the house where the great saint was born, there was no power, and the pooja room where his idol was placed was in darkness. Just hoping against hope I took a picture, pointing in the general direction where I was told the idol was, and took a picture. The result was amazing! Check it out here.

Well written. Can I know where exactly is this house in thiruvarur?

I am afraid I don't know the exact location.The local people should be able to guide you, as they did us.