N. Ramani,(getting on the stage in photo) Lalgudi Krishnan and his sister Viji, and Mandolin Srinivas all performing on stage one after another, for 20 minutes each. Where else could this happen but at the four day Thiruvaiyaru Sri Thyagaraja aradhana festival? 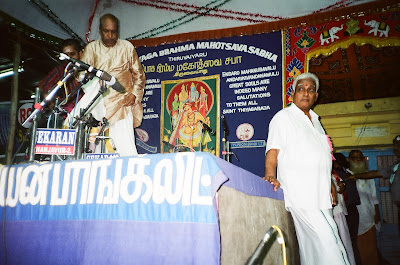 A festival for music, where artistes leave egos and arrogance outside with their footwear, and offer their music in homage to Sri Thyagaraja Swami, the composer-poet who composed so many songs. It is this devotion that makes this festival so unique. The festival marks the death anniversary of the great composer, and is celebrated at the place where he lived and died. This year is the 161st anniversary.
For years I have wanted to be present at the Aradhana festival especially during the singing of the ‘Pancharatna Kriti’s on the last day. Talented musicians, both the popular and the unknown, converge to this place specially to sing the five gems.
Hearing the ‘Pancharatna kriti’s over the years, first over AIR and then on television, had only increased this desire. However, it had never been put into action.

And even now, when we planned a trip to Thanjavur, Thiruvaiyaru was not on our itinerary originally. But serendipity stepped in. We had postponed our trip, the new dates coincided with the fetival, our friends Dr. JB and Bhama, with whom we made the trip, were given VIP passes to the festival, and that made the decision for us.

The auditorium where the festival was held was really an open pandal on the banks of the Kaveri. And though it was on the river bank, and though it was January, there were no cool breezes - makeshift walls of the pandal saw to that. But the atmosphere was charged with music. Listeners sat on the sand-filled ground, ears and minds focussed on the music. On the two evenings that we went, the hall was filled to overflowing. People sat close together, often squeezing themselves together, to make room for one more entrant. Nobody pushed anyone away - except the volunteer guards at the entrances. The audience was a motley group – young and old, rich and poor, residents and visitors. The only pre-requisite was a love of music.

A five year old boy who sat next to me, sat through for more than three hours without moving from his spot, and not a whimper or whisper from him. His aunt fed him some food midway, and he ate it quietly. He told me was in the first standard in a school there, and was learning to play the mridangam, but that he liked the thavil very much too. I turned around to see who he was with, and was surprised to see my husband’s cousin there. And the child was her sister’s grandson!

All the artistes were allotted 10 to 20 minute slots, irrespective of their standing in the music world, and the concerts went on from the morning to midnight - the only concession made to popularity being that lesser known artistes sang at less convenient(read peak) hours. To optimize the time available, two similar stages, of equally small proportions, have been erected side by side, facing the samadhi. While the musicians sang/played on one, the next artiste scheduled got ready, and settled down with accompanists and instruments on the other stage. So the concerts went on without any break, except for the introductory announcement.

An amusing sidelight here – when Mandolin Srinivas finished his allotted 20 minutes, he got ready to leave, but one of the organisers standing there motioned to him to continue, and so he played one more song. The artiste waiting on the adjacent stage remained expressionless. 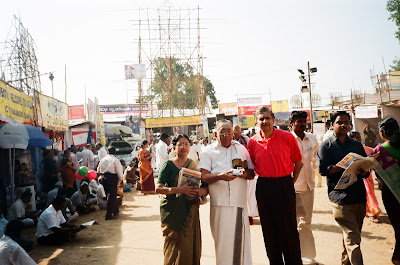 The pandal extended from the spot where the Samadhi of the great musician, now considered a saint, across to another samadhi, that of Bangalore Nagarathnammal, his devotee. There is an image of her here, facing the Samadhi of the musician she considered god. It was she who was instrumental in restoring and maintaining his samadhi. The samadhi now has an image of the composer, and it is worshipped with the same rituals as an image at a temple. The practice of singing at his samadhi on the anniversary of his death started then (1908) and has now evolved into this festival.*

A lot of booths were set up by insurance and banking groups, artifacts and handicrafts shops, and coffee and tea companies, commercialising the festival to a great extent. But organisations do have to make money to run a festival of this nature, I suppose. 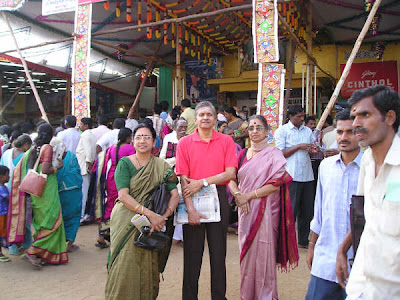 And it was very useful to us on the final day when the ‘pancharatna kriti’s were being sung – not even our VIP passes could get us inside, where ardent listeners had taken up places from as early as 5 am. We sat in the LIC booth on comfortable chairs and listened to the music on loudspeakers.

In fact, loudspeakers were set up all over town, and even as one entered it, the strains of Thyagaraja’s compositions welcomed visitors on all four days.
Some organizations had printed the pancharatna kritis in the form of booklets and were giving them away.

Thiruv Ayy (five) aaru (river) is named for the five rivers that run beside it – Kaveri, Kudamurutti, Vennaaru, Vettaru and Vellaiyaru; we crossed the five rivers while driving from Thanjavur. The town, apparently comes alive only at this time of the year. Even the samadhi remains deserted, as people carry on with their daily lives.

But the music, like the Kaveri, flows on quietly.

*Details can be had at this and many other sites. http://media.radiosai.org/Journals/Vol_04/01JAN06/tyagaraja.htm
Posted by RAJI MUTHUKRISHNAN at 09:39

This is very interesting-some nice trivia packed in as well.
btw how is the cousin?