Mammudha.
The name intrigued me, as apparently it has many others. The instinctive reaction seems to be ‘Mammudha? What is that?’

To merely say that it is the title of the new dance opera from Shree Bharatalaya is simply inadequate. What or who is Mammudha is the obvious question. Mammudha is the name Manmatha, a variation formed through usage, as he is known in the interior south where he is worshipped as a God, and Mammudha festivals are conducted even today. (Any true Madrasvasi worth his salt knows what ‘mammatha rasa’ is – it is a corruption of ‘Manmatha Raja’.) 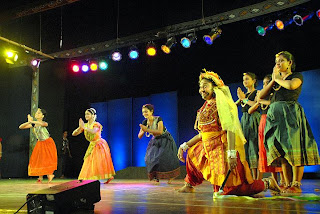 The opera narrates the story of Manmatha being burnt to ashes by Siva’s third eye, when he fires his bana at Siva, at the behest of Lord Indra. The request stemmed from the fact that only a son born to Siva could destroy the demon who had usurped Indra’s heavens. Rathi, the beloved of Manmatha is distraught by the sequence of events, but is comforted by Siva, who says when he marries Parvati, Manmatha will be resurrected, but visible only to her eyes. Rathi is satisfied.

This story from the myths is presented in a medley of dance and art forms, that keeps the show going and the audience mesmerized. From the opening scene with the two narrators as in a Greek chorus – one in Bharatanatyam style and the other in folk style - the show took off at a brisk pace.
Being a layman but a lover of music and dance, I thoroughly enjoyed the show.

I was happy to see my young friend Aruna Subbiah as the Bharatanatyam narrator – and that set the tone for my evening. She looked so pretty and demure in her golden costume, and her delicate movements reminded me of the Tanjore dancing dolls. In contrast style appeared Sasirekha Balasubramaniam, the vigorous narrator of the folk art style.

The presence of Lord Indra in the therukoothu style was effective, and the dancer (Priya Murle) expressed what her face could not (because of the make up) in the movements. A little aside in mime between Indra and the kattiyakaran - Indra asking for a soda, and drinking it while waiting for his turn to come on was charming. 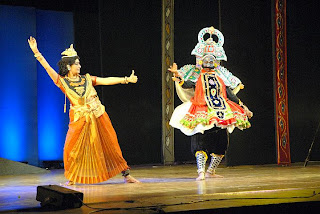 Prof. Sudharani Raghupathy was a gentle and sedate Manmatha gracefully wielding the sugarcane bow and the panchabana. I was also impressed with the dance movements of Nandi (Anusha Venkataramani). In fact, all the dancers were at their best.

A pleasant surprise was in store with young dancers frisking in Western dance movements to Vivaldi’s ‘The Four Seasons’, one of the few pieces in Western classical music that I can identify and enjoy.
The music and dialogue was all recorded, and the singing was of a high order.

The décor was by V. V. Ramani, suitably unobtrusive to set off the multicoloured lighting. He was also responsible for the costumes, as well as the art in the publicity material. We see Sudharani’s face as Mammudha holding a sugarcane bow, and arrayed in twin costumes of Bharatanatyam and folk art.

It was a neat blend of different dance forms, with no dissonance whatsoever. K. S. R. Anirudha, son of Sudharani Ragupathy, is the mastermind behind the show – and is to be congratulated.

Will this set off a new trend? We will have to wait and see what next year’s ‘season’ has in store for us.

that is a beautiful review of mammudha. I wrote a small one on my blog too...a much simpler one though!!...raji mam do u remember the shivani who worked in MT for a while?? that is me!!

Of course I remember you, Shivani. It is so nice of you to stop by my blog and write a comment.
How are you doing? I just peeked into your blog too, and am happy that you are writing so much.