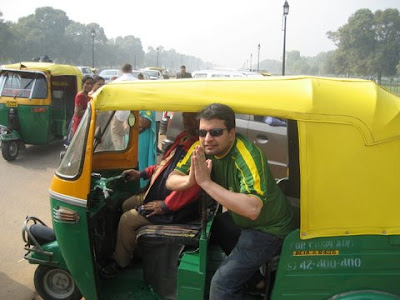 Delhi!
Or rather, New Delhi.
After nearly 20 years!

And the first thing that caught my eye was the auto-rickshaw, or scooter as it is called there.
Instead of the staid black body with yellow top as they used to be, the scooters were now painted vivid green and bright yellow – you could certainly not miss them.
I was told that they run on CNG – Compressed Natural Gas – to reduce pollution in the city, and hence the green, symbolic of a pollution-free environment.
The public buses also run on CNG.

Delhiwallahs say that the city is still polluted, and the dust and traffic is far too much.
But going from Chennai, I could not help but notice how much better the traffic is.
The roads are wide with many lanes, and there are fewer two wheelers. People are encouraged to use the Metro. And in the few days that I was there, and the few places that I went to, I did not see any encroachments on the pavements
There is beautiful greenery all around, albeit shrouded in some dust, but I am sure it looks good after the rains. Lung space is something that has always been evident in the capital.
No matter where the housing colonies sprout, emphasis has been laid on that vital patch of green.

A visit to Delhi Hat took me to where we once lived, West Kidwai Nagar, and I could see several changes.
A flyover has arisen near the crossroads of Ring Road where Safdarjang Hospital and AIIMS are (were it not for my companions, I would never have recognized the area) and the sides have been converted to sloping lawns, which are pleasing to the eye. I was told that several flyovers have been built over the last few years.

I was never fond of Delhi when I lived there; the cold winters always made me uncomfortable - but now I think I may begin to like it. End November, and I did not find the city cold at all; being well-upholstered and insulated may have something to do with it.
Posted by RAJI MUTHUKRISHNAN at 12:21

Email ThisBlogThis!Share to TwitterShare to FacebookShare to Pinterest
Labels: Delhi and pollution

Only Raji can express so much with such economy! I'm not surprised that Pope is one of your favourite poets!! Thank you for capturing that Delhi air.