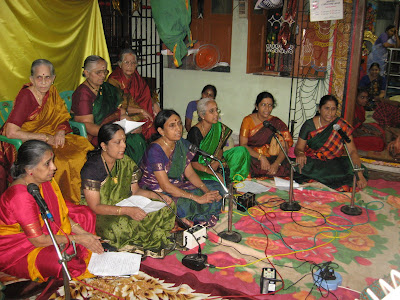 It was our first venture.

Our music class has now been functioning for more than a year.* And we have learnt quite a few kirthanams and bhajans. An ideal time to display what we have learnt, felt our guru Ganga. So when the opportunity arose, she encouraged us to go for it.

One of the more enterprising ones in our class had met someone who was organising night-long singing at a temple for Vaikunta Ekadesi. Now night-long was too ambitious, she said, but we could sing for an hour and a bit. And so we practiced vigorously and sincerely, till we were all singing in unison. 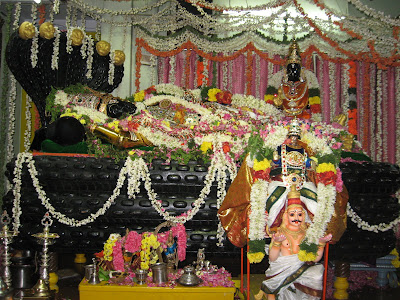 Last night all of us congregated in the small Pattu Kolavizhiamman temple, adjoining the premises of Sanskrit College. It is a temple with several images of various deities, housed in a private building, and is looked after by the lady of the house. (How this transpired, is a story in itself). The alankaram of the recumbent Vishnu was simply divine, and the sorga vaasal effect was complete even in the small place. Gita and I, just back from an uplifting concert by Sanjay Subrahmanyam, felt that the ensuing euphoria had heightened our musical sensiblities.

We sang about a dozen songs, chosen carefully. To our astonishment, there were mikes and speakers! Tabla and dholak players scheduled to accompany the next singing group joined in – and with the percussion, the effect was more dramatic - though we did have to hurry a bit to keep up with the tabla player’s pace. To be honest, we did stumble in a couple of places, but with Ganga in charge, we soon got back on track.

Our first concert taking place in a temple seemed a good indication. It was a satisfying experience. Not just to us, but our audience, too, as they told us. The listeners, who were in the main devotees who had come to the temple and the group of singers scheduled to go on next, were impressed enough to compliment us.

We could only feel grateful that there were not too many present unkind (or discerning?) enough to point out the faults!

* Read about our class here: http://rajirules.blogspot.com/2007/01/rajis-ramblings-sms-chapter.html
Posted by RAJI MUTHUKRISHNAN at 20:07

Email ThisBlogThis!Share to TwitterShare to FacebookShare to Pinterest
Labels: Music Girls on stage

I second the wah, wah. Let me know next time you sing - would love to try and come and listen!
Kamini

Congratulations on your medai etram. Sounds like fun.
Love the sari color, BTW!

Madame, Salaams! Please let us know what songs you sang! Wish we could hear you all.

congrats raji. hope have you taped.hope i will be able to hear sometime.