LAMPS IN THE POOJA ROOM

A dear relative passed away last week. She was 79. She was a very sweet and affectionate person, and everyone who spent time with her was drawn into the warmth of her loving circle. Her death has left us with great sadness – the manner of her death more so.

On the day of Karthigai Deepam, she was sitting in front of the pooja room, doing what she had been doing for years - stringing the flowers, and saying her prayers. She stretched to clean one of the pictures, and her sari caught fire from the lamp placed in the pooja room, and in no time it had spread right up to her chest.
With great presence of mind, she had tried to douse the flames, but wasn’t successful. By the time the family came to her side hearing her cries, she had been burnt quite a bit.
After a week in hospital, she died. One can only imagine the suffering she would have borne.

It was a terrible way to go.
Another lady, the mother of my son’s friend, died the same way last year – she was also in her late 70s. It has happened to two other old ladies known to me – dying after the saree catching fire in the pooja room from the lamp.

Which brings me to the point.
Is it really safe for older women to light the traditional lamp with the oil and wick in the pooja rooms? 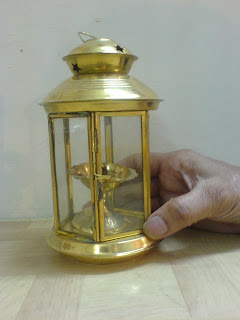 The idea of lighting lamps, or even candles, is to dispel darkness. This can now be done with the flick of a switch, and we should consider it for the sake of safety.
And for the more conventional minded, there are electric lamps fashioned after the traditional ones, with little bulbs flickering like flames.
No?
Then there are those traditional little lamps meant for outside use as in the thulasi madam, which are enclosed in small glass walled chambers, so that the flame is protected. These can be used in the pooja room, without fear of setting anything alight.

We should consider this seriously, as it really is a matter of life and death.
I already have one in my pooja room.
Posted by RAJI MUTHUKRISHNAN at 06:50

I agree totally- people should switch to electric lamps.

That is a very sad story, Raji, and you have done well to alert people to the dangerous risks that we take with open flames. How much all the family must feel for the dear lady, and how she must have suffered.I appreciate your suggestions of practical options to traditional lamps. Sadly, I'm reminded of a senior in school who died the same way -- the poor girl must have been 16 or 17.

Well put, Raji.
I must add to the list the tragedy that befell my cousin's mother-in-law, who succumbed the same way. What a pity! We really should spread the word around.

My dearest friend's mother met a similar end - the heart curls up in helpless anguish to even try and think of the agony!
Ever since we moved into our tiny little apartment some eight years ago there has been no oil lamp lit in the house. It is impossible to find a place where one can be lit and left burning without creating a fire hazard .It was a difficult decision to take because "Velakku Etharadhu" was such an integeral part of the daily routine and for a long time I felt a sense of "omission of duty".

Either this is a really really common occurence or we are all talking of the same person, because my schoolmates' mum also passed away in this horrific fashion.

Horrible... but not highlighted at all.

I've often wondered about leaving a lit lamp and going out of the house, even that - as Viji says - is a hazard...

No, we are not talking of the same person, Ambika.
Everyone I have talked to knows of someone who has met this agonising end. Strangely, as you say, the problem has never been highlighted.
An awareness campaign is absolutely necessary.

Sow.Raji,
I should compliment you with all sincerity the substance and style of your writing. The subject you wrote is very touching and the suggestions you have made are worth practicing.
These kinds of tragedies are avoidable with a little bit of education and awareness by the public.
Please contiunue your crusade.

happened to read your post. thanks a lot for the tip. my pooja room is just close to the TV room and it always worries me to light the lamp when some one is in the room watching TV. now i'm going to get myself that beautiful lid and hope it solves my problem.
Rohini

Are there smart electrical lamps like kuthuvilakku with 5 wicks etc available in eth market that can be always lit, serving the purpose while being safe still. I woul dbe interested with my little children around meddling with things, let alone accidenet prone situations leading to tragedies described.

Umashankar, yes such lamps are available in Chennai stores. I have been using one for some time now.

Thanks for sharing this painful story, but it important to spread the awareness of this deadly hazard.
I would like to add that incense sticks, agarbatti and dhoopam, etc also falls into this category.

Apart from the fire hazard, these are also an air quality hazard, the volatile organic compounds and ash and particulate matter emitted by them, are triggers for allergy and are implicated in bronchial problems.
It is important that we scientifically evaluate these traditional practices, and follow healthier ways to practice these customs, and to avoid those which are deemed unsafe.

oops dats very sad indeed RM..!!! well dats a gud idea..it so happens even in kitchen's too..need to do thorough check up wid cyclinders as well as stoves n gas tubes!! anyways thanks for highlighting the problem..:)

How strange Raji. A veryd ear friend's motehr, living all alone in a little town, recently died in a similar accident. Except that this wasn't in the pooja room at all. She had gone out of the house rather late in the evening when darkness had fallen, into her backyard to light the diya in her tulasi maadam; her polyester saree caught fire, a strong wind fanned it and although she got back into her house and called her son and daughter in far away Bangalore and Chennai, but succumbed to her wounds before they could reach help to her. So it is not only the pooja room but it is also the tulasi maadam, the gas stove...

Death in the puja room -- would make a telling title for a story or a movie - could even be of a crime mystery.

Timely piece Raji. My heart goes out to the women and to their families. Terrible suffering.

I actually do have the exact glass covered lamp, but even so, agree that an electric lamp might be the way to go, as knowledge/light can come only if we are still living
thanks for the beautiful piece

Nalini Rau, thank you for leaving a comment. I value it.