DAY OF ONE THOUSAND MOONS 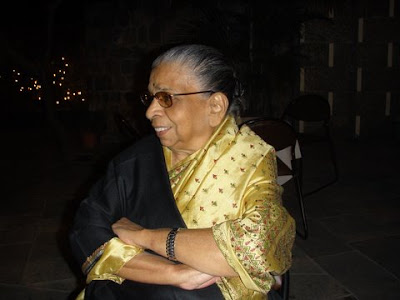 It was the most wonderful occasion.
It was my mother’s 80th birthday.
November 27, and the whole family had managed to get together for a week in New Delhi, where my mother, known to everyone as Maiji, has spent most of her life – and all her married life.

There were the five of us, her children, and our families in full force. And this must have delighted Maiji more than anything else. Only one grandson and his family could not make it, and his absence was felt.

The last time we were together was for our youngest sister Gowri’s wedding in 1986, which was celebrated in Delhi too.
Since then many have been added to our family.
And a vital member, my father, lost…

What we did together in those few days was simply have fun, and make beautiful memories that will be remembered in family anecdotes. 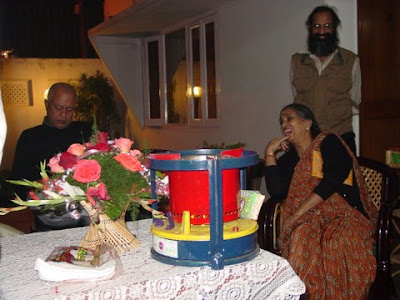 Moments of fun - when my brother Bala presented Maiji with a Janata stove, which was her regular birthday gift in the late 60s and early 70s; when Parvati delighted us with her songs, and we sisters pitched in merrily; when the youngsters went out to make merry after the seniors had retired to bed…… 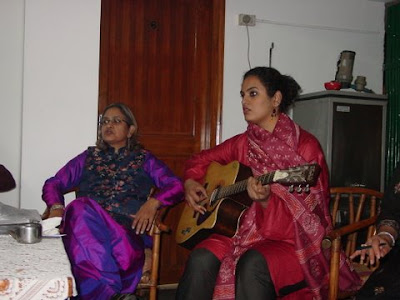 The highlight was the party at the India International Centre, organised by my journalist brother known variously as T. R. and Thambi.. Friends and family based in New Delhi, were all present, and they included our friends too, who could not but remember how they had feasted on Maiji’s cooking on innumerable occasions. 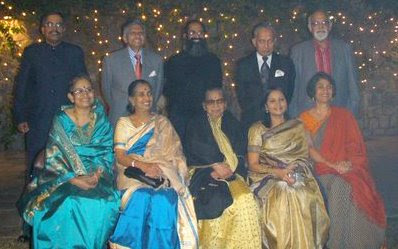 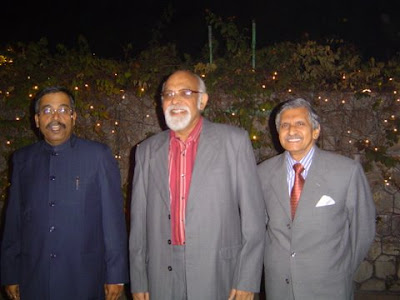 I got to meet friends from my college days I had not seen in decades – I was in Delhi after nearly 20 years!

Maiji has been blogging for more than a year, writing her memories down. To mark the occasion, her writings were collected and published as booklets. Viji, my sister, and her daughter-in-law Deepa, were in charge of this. Guests were thrilled to receive copies. Maiji’s posts can be read here: http://memories-and-musings.blogspot.com/

The next day we took a day trip, again organized by my brother, to see the Taj Mahal, which, strangely, Maiji had not seen in all those years of living in Delhi. Only Mohan, Gowri’s husband was missing – he had to leave for his tea garden that morning.
We travelled in a van and it took nearly five hours to get to Agra. A fantastic lunch was laid out at the ITC there. 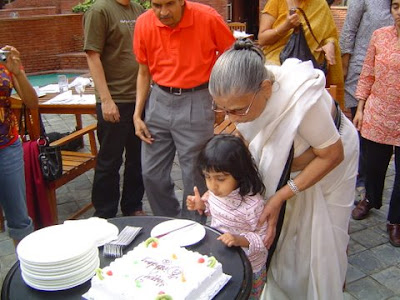 Maiji cut a cake, ably assisted by the youngest in the group, grandson Sankar’s daughter. After enjoying the view of the Taj from the hotel, we proceeded to look at it up close. 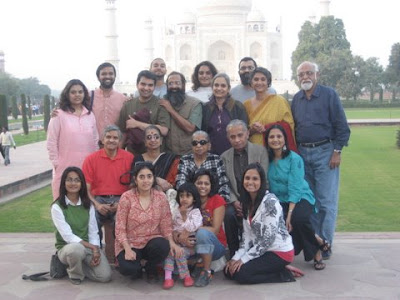 The day after, the group sort of fragmented, with Bala’s wife Jaishree leaving, too.
But the youngsters grouped and regrouped, sightseeing and partying, till one by one we all had to leave.

To quote someone’s classic words, “A wonderful time was had by all!”
Posted by RAJI MUTHUKRISHNAN at 15:01

Great stuff. Made me relive the daze.

Raji...you said it all. Thank you.

Raji,
I have been waiting eagerly for this - and Sankar was nice enough to give me a "sneak-preview" by sending me the group snap in front of the Taj. What a priceless and precious occasion! It made me so happy reading this, and seeing all the pictures. And do save me a copy of Maiji's booklet.
Love
Kamini

Lovely, lovely, and Sekar should've been there to pay homage to feasting on periamme's cooking as well!

Must have been fun! Reading (and attending) stuff like this is what keeps families together in our nuclear worlds!
Looking forward to more!

Though belated, please convey my best wishes to Maiji.

This is a good post. All of you seem to write well.