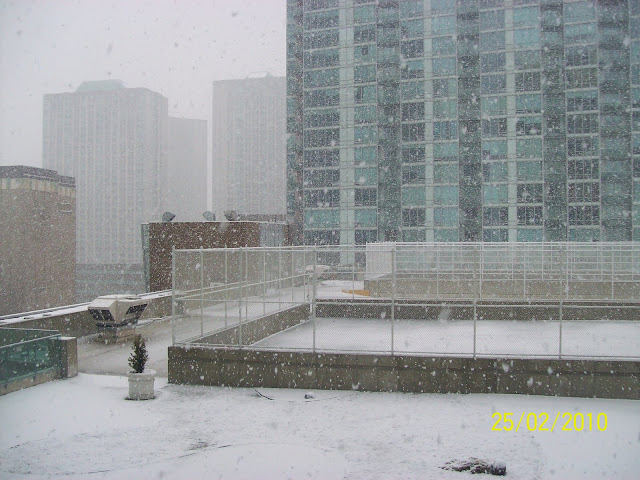 There is no pleasing some people. Sweltering in the May heat here in  Chennai, and sweating profusely, I long for the the cool climes with Samyukta in Newport, Jersey City, just across the river from New York where her parents work. And there in the winter, I longed for the warm (?) sunshine of Chennai

Though we have visited our family before, it has always been in the summer. This was the first time we were there in the winter. (Other winters I experienced were in Delhi which now seem comparatively mild, where I grew up, and in Manchester, UK where we spent a couple of years, comparable to the New York one).The cold was something terrible. Inside the building there was no discomfort, but stepping out made me miserable. Any exposed part would turn red and start itching. I would be well wrapped up, right up to my ears, but my cheeks and nose suffered. 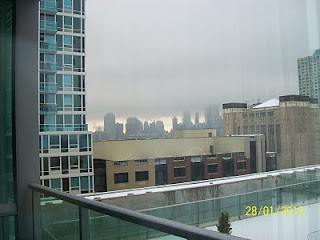 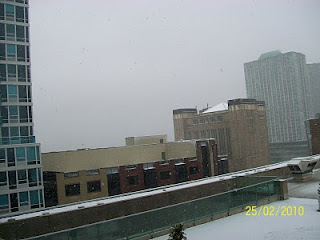 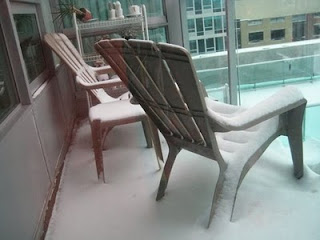 And what a winter – snowfall more than once in the season, even at the end of February, when our visit was coming to an end, and we though that the weather might turn warmer. On one occasion we read that the snowfall was more than 12 inches. And we could no longer see the Manhattan skyline from the apartment. On a clear day you can see the skyline of a section of from the tiny balcony of our 10th floor apartment, or through the ceiling to floor glass windows of the living room. It was as though it had just disappeared. The balcony and the furniture in the balcony were totally covered by snow.

We read of disrupted flights and stranded passengers, while we stayed warm and snug inside, thankful not to be out there. My son and daughter-in-law of course had to go to work, snow or not, and once Vandana even had to fly to Milwaukee overnight for a client meet. My husband wrapped himself up well from top to toe and trudged out as he did everyday, snow or not. I was content to stay home with Samyukta and admire it all from there. 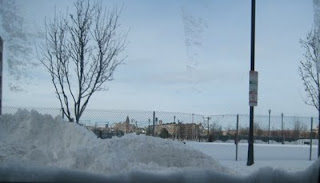 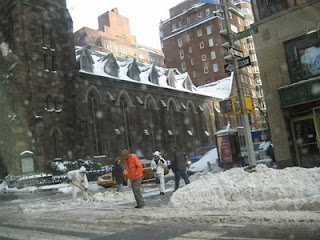 But one day, we did drive out to the city to take in the sights. The ledges and crevices on the buildings were loaded with snow, while the denuded branches of trees bowed down with the snow. We saw the snow banked up on the pavements, and workers cleaning the roads. When we got out to walk to Saravana Bhavan for brunch (yes there is one there, too) we had to squelch our way through the snow. And then the snow was no longer white, but a slushy mess.

After one snowfall we had the most amazing view from the apartment. I got up in the middle of the night just to see the snow fall. It had however stopped snowing, but the terrace on the floor below us was covered in snow, so pristine and pure, and awash with a white light as though it was moonlit, that it looked surreal.  I took this picture without using a flash.... 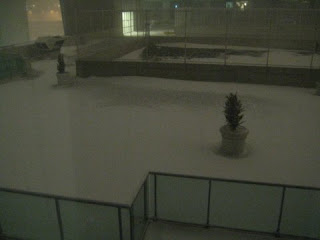 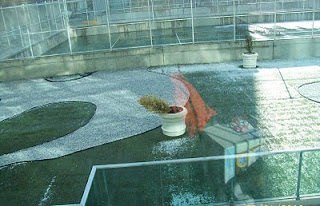 ...and this is what the place looks like minus the snow.

Daytime saw some brave youngsters falling about in the snow and trying to make snowmen. 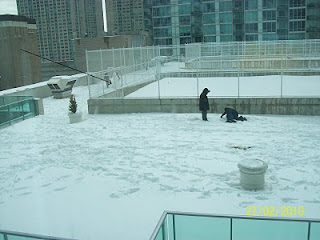 The skating rink in the neighbourhood was frozen solid, and there was fun and falls for the children , and some adults too.

As I sit on our balcony here in the morning before it gets too hot, listening to all the birds – from the crow to the koel, sipping my filter coffee, I think about the apartment there, so warm and cosy, insulated from the cold snow outside, and so silent. No birds sang.

We seem to spend a life time moaning about the weather, albiet to hot, cold , wet and windy there's no pleasing us. I love the pictures they are excellent. A most enjoyable post.

You seem to have settled in the US Raji ! When are you getting back to Chennai ? Just joking, have a wonderful time with your family, especially your grand daughter...Thomas

Yvonne, whatever would we do if we did not have the weather to crib about!

Thomas,I am back in Chennai now!

ssstoryteller, thank you so much.

There is something so ethereal about snow !! Am reminded of the first time i saw and experienced snow ....maybe i will write about it . Raji you inspire me

I remember that snow storm! The initial hours were so exciting, huddled warm and cozy in a home over stocked with supplies, but then, in New York at least, the snow very quickly turns to a filthy black slush and all the romance is gone. My favorite sight is of Central Park, white and silent under its blanket of snow.

I have never understood the romance of snow. I have always hated it even when I didn't live in snowy Wisconsin. And now I am hate it more. Summer is finally here and I am loving it :-) Being a Madras girl, I think my endurance for heat is higher than that for cold!

I think Cyclone Leila must have reduced some of the heat in Chennai.

Quite an experience in snowland - can be quite painful and uncomfortable though if you are not used to extreme cold. Nice pics Raji. You have become such a good photographer. I remember our visit to New York in 2006 & the lunch we had with Sriram & Vandana - not Saravana Bhavan but some nice Chinese place nearby. It was warm & sunny & rained later when we boarded the bus to Washington DC.
Looks like you are back in Chennai !

Viji, am waiting for it.

Yes, Kamini, it was exciting, and a new experience for me.

Janani, I agree with that bit about endurance for heat being a Madras person. After cyclone Laila, it is very pleasant here now.

Ramu, thanks for the nice words. Sriram Vandana too often talked about your visit to their place.

Lovely post about something so 'foreign' to us and so exciting. And great snaps to back it up. Like pics form a foreign movie.

I agree that Snow is underrated. Till Bob Willis came along, Snow was undoubtedly the best bowler for UK since days of Truman of the body line fame. He was Wisden's cricketer of the year 1973..oops wrong snow!

I would not suppose to read a snow post by the 20-ish of may, lol:)

Beautiful shots. This reminds me of my first winter snow experience in Marlboro 10 years back.

Nostalgic writing:.)I miss snow now:).Great to see you back raji.

Phew! Just looking at those pictures made me feel the chills! :)

Wonderful pictures and an excellent space here! I'm glad to have stumbled upon your blog!

Wow shots all!
Really cools the atmosphere here too. :)

Kallu, thanks. Your words encourage me to take more pictures.

Anonymous - wrong Snow, but thanks for reading about my snow.

Rajesh, thanks for appreciating my amateur attempts.
Meera, thanks for visiting me. I am flattered that you missed me.

Rakesh, welcome and thanks for visiting.

Indrani. Thanks for spurring me on.

You are so right when you wrote ' there is no pleasing some people'. We always feel that the grass is greener the other side.

Lovely clicks and a very interesting read. You seem to have enjoyed the snow and sunshine.

Asha, you are right. I do not step out much, but when I do, I enjoy myself.

it is so hot these days that a bit of snow is welcome. slowly settling down, bust still miles to go...

Hari, I just kept putting off and off, writing about the snow, till like you I wanted to feel the cool in the hot days.

lovely pics..especially the "Surreal" one..