BUT WHERE IS THE AUDIENCE! 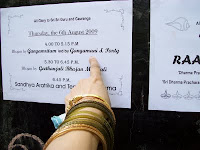 To take a line out of Edward Lear - it was just as I feared. Not a soul to hear us sing at the Sri Gaudiya Math temple, (See last post) even though it was splashed on the noticeboard. Unless you counted the involuntary presence of the Swamijis, and the four bovine creatures belonging to the temple. 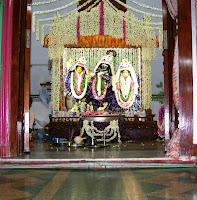 Even family members, who normally accompany us, were absent on account of the odd time slot – my husband hardly comes to hear us sing, and this time was no exception. Visitors to the temple usually come around 6 pm for the pooja. However Lalitha and Padmini’s father was there with his video camera, as were Vatsala’s mother and daughter, and Meenakshi’s cousins. 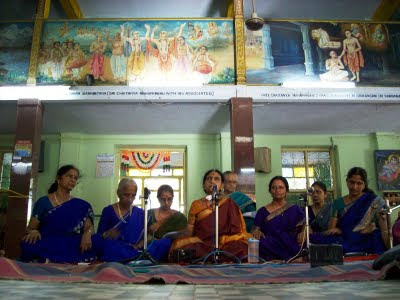 The hall where we sang is part of a building next to the actual temple housing the deity, all within a compound, and had painted depictions of Sri Krishna and Chaitnya Mahaprabhu not only along the interiors but on the ceilings as well. 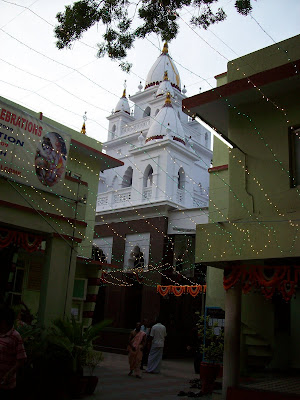 The gleaming white tower of the temple, after the fashion of temples in North India, is not visible from the road, and I was thrilled at the unexpected view within the gates. The Math was built in 1932, thanks to the munificence of Maharaja Sri Vikrama Deo Bahadur of Jeyapore.( I wonder if the summer palace of the Maharaja of Jeyapore in Gopalapuram which is now called Ambience also belonged to him.) 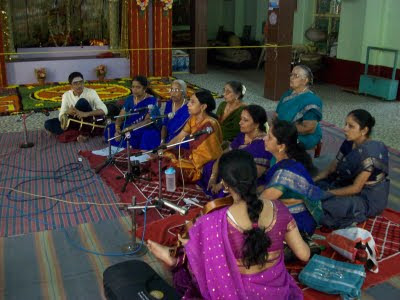 The paucity of audience was compensated for by the mikes – we got six – and our own enthusiasm. We sang for 75 minutes - kirtanas on Lord Krishna and Sri Rama, accompanied by Jwala ( a post graduate student) on the violin and Sri Krishna on the mridangam. Sri Krishna is a high school student and a disciple of veteran Umayalpuram Sivaramakrishnan. Our guru Ganga, despite a fever, led us as competently as usual. We missed Geetha who has gone to spend time with her little granddaughter.

The audience swelled towards the close of our programme, when the members of the next group to sing came in!

A video clip of the concert is here.
Posted by RAJI MUTHUKRISHNAN at 09:09

Congratulations on an excellent post, the photo's also were very enlightening.

should have arranged for prasadam distribution or anna daanam...folks will flock in unmindful of odd hour :)

Raji, Gracefully written. I think you sang for Krishna not for the audience. I am sure Krishna did listen to your songs!

I didnt know Gaudiya matt had such a beautiful temple inside. If only you could record your next performance and post it online? Readers like me would love to listen. There is something divine about a live performance, there is so much Bhakthi.

What a pity there was no audience. Could you post the video? It would be lovely to hear you.

LOL!! Maybe your reputation preceded you??!

Sounds like some alien land - Gaudiya Matt - and not familiar Madras....shows my ignorance.

Colours are great on a cold morning. You certainly made a splash. Even if the turn out was low; you are certainly taking it with your dash of humor. Nice post and great effort.

That was a great read. 75 minutes. Wish you many more such occasions!

Yvonne, thank you so much.

RAghu raman - what a brilliant idea. We shall remember it next time.

Bala, - you are right of course.

Lazy blogger - it took me 42 years to discover it!!!!And me a Chennai resident all the while. Have posted a small clip here:
http://rajirules.blogspot.com/2009/08/sample.html

flowergirl - I was afraid of that too

Kallu thanks - you are most encouraging, as usual.

Swarna, thanks so much.

here in the us of a they ensure crowds by providing free bhojan. I have seen how the halls fill up ..

but the spirit is the important thing - so keep going..

it is very sad to note that smt. raji muthukrishnan had expressed her displeasure on net regarding her bhajan performance at sri gaudiya math chennai. during sri janmashtami celebrations, when it seems audience were not present. but it seems she doesnt knows the greatness and holyness of this place where great saints did their penance and seva are done by dedicated, celebated, renounced brahmacharis and sanyasis. great and renown singers felt blessed and sang the bhajans for the pleasure of the lord only. they never expected the audience. most of the devotees sing here during krishna jayanthi for the sake of krishna only and feel blessed.

there are places where audience will be plenty. but when there is no devotion to the lord, it is just frogs calling snakes only. we wish and prey almighty during her ensuing performances she may get more audiences elsewhere. may god bless you.

Respected Swamiji, I thank you for your comment on my blog. I am honoured that you have visited the blog.

Believe me, there was no displeasure at all on my part or on the part of our group of singers. We had great pleasure in singing at the wonderful temple, and we had seriously practised hard to make our offering to the Lord as perfect as possible. There was nothing lacking in our devotion or bhakthi, either. We were blessed to be allowed to sing at the holy temple, and felt very happy to be able to do that.

What I have written in my post is just light hearted self-mockery. I am sorry if I sounded different, and have caused hurt to the Math.

There was a little disappointment, I admit, that there were not more listeners. But now I agree with you that the Lord alone is enough - to sing to Him is most blessed of all.