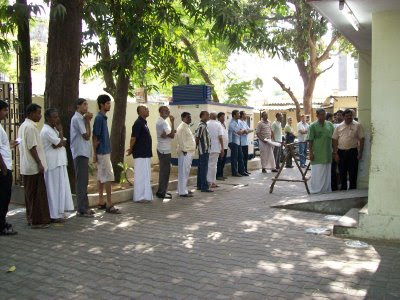 *That should be BEL for BHARAT ELECTRONICS LTD, as pointed out by Swarna. Thanks, Swarna.
Posted by RAJI MUTHUKRISHNAN at 14:42

It is so nice of you to remember the contribution of late writer Sujatha in the voting machine.

www.southchennaivotes.wordpress.com is keeping a tab on Chennai South.
Once the poll results are out and we get to know who our MP is, there is work to do for public spirited citizens.
Keep a tab on our MP.
This web initiative hopes to do just that.
We need volunteers to do this - one to monitor the MP's attendance in Parliament, one to report back the issues he raises there, one to report the work on the ground, another to followup on promises made and onground projects.
This is not a fulltime job. It needs your spare time.
But it has to be responsible.
Perhaps, Chennai South can at least keep a record of its MP and let the world know.
If you can volunteer, post your interest at www.southchennaivotes.wordpress.com

There was not much turn out in the booth I voted. :(

I hope your candidate was successful!

Counting the hours until Saturday, for the results. This has been such a long wait.
Nice that you have remembered Sujatha, and it is refreshing to read a non-cynical post about the elections.

Good to know that you voted, and yeah, Tamil Nadu has no chance but to see one of the Dravidian parties in power!!!

The booth I voted in was literally deserted - either that people were early birds like you or they didn't care, which is too sad to hear.

raji,
I just wanted to tell you,how detailed and clear your posts are:)When i write ,my husband would say,dont write like you are talking.Because others may not know what you are writing about,unless they know your background!I know what he means now:)There are no doubts or confusion when i read your posts.Very clear.
Thanks:)

Our voting was in the first phase and I have already voted. The ink is still there on my finger.

The results are out and UPA has a majority and I hope there will be a stable government at the centre. Of course, Karunanidhi will ask for his pound of flesh for supporting UPA.

Have a nice day:)
Joseph

Now that the results are out: I feel Gandhis can win any election hands down just with their surname! If Sonia, Rahul and Priyanka quit congress and start another congress saying it is the 'Real' congress and take rank newcomers they will win again.( this happened when Indira was there. The 'syndicate' was thrown out. )All the stalwarts like Chidambaram, Jayanti Natarajan, Kapil Sibal et al without these 3 to suppport might even lose their deposit.

So, whose candidate won? (you had mentioned that the three of you voted for different candidates) ;

Given the almost total victory for the Turin-born Sonia's Congress and her Congress's partners, I wonder about the voting machines.
People have spoken or rather the machines have spoken. JaiHo voting machines!! Even they recognise the Nehru dynasty!!

Did the candidate you vote win. I m happy with the election results, thank god we voted for stability.

Everyone's so curious about your choice of candidate...!!!

the answer is there in your blog...

Read about Dr Kalaigner Mudalvar meeting Sigh and Sonia with son and daughter presumably MPs elected now. No doubt the papa has asked cabinet births for these two. Wonder about their qualifications. Do they need one besides the offsprings of the Mudalvar? Remember Nehru often used to utter the word "Tamasha". Sonia in a similar situation with her son and daughter, may not feel strange. Looking from outside the country, what a democracy!

Good citizen Raji,
I wish I could say, one of these years, 'I too voted'. At present, we 'nomads' are not wanted...
and I am proud to share Alma Mater with Sri Sujatha, (MIT, Chennai)

I am here after the results...

I should say Chennai surprised me with voting down Mani Shankar Iyer...and then the narrow escape of P. Chidambaram :)

Infact Chenna electrorate has been a puzzle to me always...too much regionalism i guess :)

That last piece is an information to me..on writer Sujata :)

Only One qualified women to contest from all of Madras ?
Only One women elected from the State ?
How many of those who contested
have or had trouble with the Law?
How many of those elected from the
Dravidian 'JackAss' party and All
'JackAss' party know or understand the issues?
Why do people exercise their civic duty knowing
the 'Party' backed candidates are
proxies for Dravidian Mafia Family.
Curious minds like to know!
May be the answers are in your next blog

Thank you everyone , for dropping by.
The candidate I voted for was young, educated and full of bright ideas, but alas he was not put up by any party, and stood as an independent candidate. And even though I knew he would not win, I voted for him. Maybe a time will come when these qualities will matter more than party politics.

Meerasworld, that is a nice thing to say.

ER Ramachandran - too true. We seem to have it in our blood - the love for dynastic rule.

Kamini - My husband and mother voted for the same person (I was mistaken earlier), and he too being educated and an Independent, lost.

T and S - in a way I am satisfied too, despite the candidate I voted for not winning. Stability is what we need.

Koand - am glad you listened to the election news on your radio.

Since I don't want this to be a platform for political discussion - I shall not say anything more.

Except that I miss Sujatha's writings.

Oh sorry Raji, i forget that you are apolitical! :)

hopefully the right party has come to power and will do good for the populace...hopefully they will know what to do, when & how..