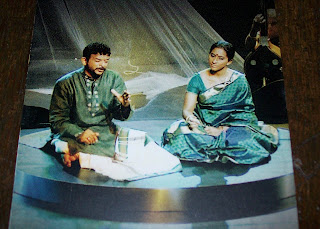 There is no other way to listen to a music concert, I have concluded.

The experience was so satisfying – in a darkened theatre, with the artistes pleasingly larger than life and the sound, glorious sound, pouring from all parts of the theatre in stereophonic splendour, excluding all other noises.

We had been invited to a special show of ‘Margazhi Raagam’ a film which was a presentation of a music concert by two big names in the Carnatic music firmament – Bombay Jayashri and T. M. Krishna. The show had been organized by Thejus Chandrasekhar in honour and memory of his mother, D. Patammal, who had composed more than 650 songs in Thamizh, in all the ragas of the 72 Melakarthas, and then some more.

Margazhi (December 15 to January 15) is the Thamizh month devoted to the Gods (and music in Chennai), and Raagam means melody.

It was intriguing. It was a film, and it was a music concert, said the notices. That the singers are two of the best today led to a high level of expectation, but I was not sure what to expect. The two artistes had presented live concerts together recently, and there had been conflicting reports on that.

The show was in the Sathyam theatre complex, and before the picture started, there was some western music in the background – which was not at all the right setting for a Carnatic concert. And the lights were dim, unlike at the halls where the concerts are held live, where they burn bright and are never dimmed. And I felt some trepidation.

But as the theatre darkened completely, and the credits came on the atmosphere was set. A dark auditorium can hold one enthralled as nothing else. All your concentration is on the one visible place of light. Here our senses were drawn to the screen to the exclusion of everything else. And when the music started, what bliss! Such pure sound, without any disruptions caused by faulty mikes or rude rasikas, who enter and leave auditoriums at will. It flowed from all sides, and it was divine. The aural quality was matched by the atmosphere of sanctity captured by P. C. Sriram’s camera.

The first song was by Jayashri, and her soothing voice and serene manner were captured delightfully by the sound engineer H. Sridhar (who died recently, and to whom the picture is dedicated) and cameraman Sriram. She sang two more pieces, and the final line of the 'raagam khamas' was picked up by Krishna after an interlude by the two percussionists.

Krishna’s entry was smooth. I had seen only one percussionist accompanying Jayashri and wondered where the other one had come from. He was Krishna’s accompanist! Krishna’s style was in direct contrast to hers, full of flamboyance and vigour, waking up the senses which had been lulled by Jayashri’s soothing voice.
After a couple of pieces by Krishna, the two sang together - in great harmony and perfectly complementing one another.

The final piece with just the tampura was a revelation. As was the whole experience.

Wow!! It must have been quite an experience!!!

I really want to listen to Bombay Jayashri. She is one of my favorites!

I too'experienced' the "Margazhi Raagam"...I did not know how to put in words the sublime experience and your words brought back the ambience, the memories and the feeling...

While Bombay Jayshree closed her eyes and let Music flow out of her soul-it was like she was having a personal conversation with the Divine and we were the lucky eavesdroppers.
And Krishna,he sat there playing with Music - the swaras- the thala and the laya-like he was on some jaunt...and did not mind us joining him ...

I emerged out of the theatre in a trance...

HI Raji, you make it sound so divine. And you've sold it to me :-)
Hope to see this musical but got to wait till the theatre is right. Anything less wouldn't do it justice, we can judge from your reverence.

and I leave for kitchen singing

Wow!And that's a great photograph there!

Thanks for that review, Raji. Wish I get to experience it soon. I had been looking forward to it.

Glad you enjoyed yourself and for something taken in an auditorium the picture is terrific....

Praveen, I hope you get your wish soon.

Ardra, you have expressed yourself so beautifully. I am glad you also enjoyed the film.

Kallu, Devika, Gardenia, Swarna - I would be satisfied if I have conveyed half my pleasure to you all.

Soul searcher - I have to confess that picture was not taken at the theatre, but was a photograph of the card which they gave us at the theatre - a card with this picture, and other details of the film and D. Pattammal.

Musical concerts are something I have never visited in my life... great miss, right?

Sigh.... Musical concerts are big target for me...

not even able to go to a nearby saravana bhavan :(

am travelling once again.... see you all later.

I simply enjoy listening to BJ's voice. Compared to the high notes that today's singers flout, BJ is a relief...It is like hearing awaz de by Noorjehan after an hour of lata and asha...Must commend Harris jayraj for bringing her to the big world of music listeners...

Indrani, Kat - never too late to start. Music has just to be listened to, no learning is required. :)

Maddy - two views on that prevalent now. BJ's voice has been affected by singing for film songs, says one group.Another says she is better than ever before.

Saw Margazhi Raagam. Good advertisement for diamond studs and silk kurtas. Krishna stole the show from Jayashree by his cheerful stage presence. She lost a good chance to woo the audience, by keeping her eyes closed all the time. Next time Krishna should do the movie with his wife Sangeetha. She is a great singer. His Khamas (ever green Seethapathi) and RTP (though abridged in the end) were great. Good effort.