Well - preserved, a friend remarked of my house and me, and in that order. I was flattered, even if I did sound like a jar of pickles. My hair has thinned, and my waist has thickened, but I wasn’t too bad, I thought.

Her words reminded me of a recent meeting with actor Vyjayanthimala. 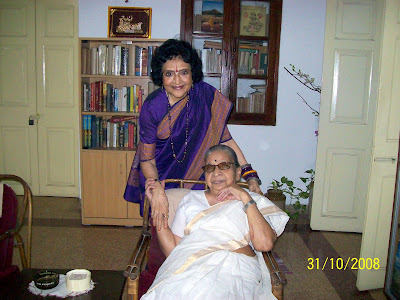 Now here is a person who has aged gracefully and wears her years with élan. And not a bit of fat anywhere. She is so trim and slim, and that lovely smile from her ‘Madhumati’ days is intact. 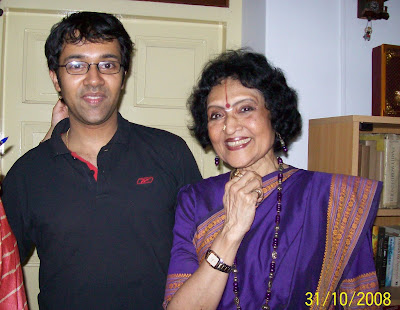 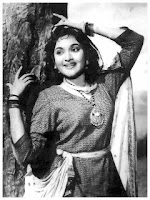 When Vyjayanthimala was in her prime I was rather young (I think I was about eight when I saw ‘Nagin’) and was totally captivated by her. She was beautiful and graceful, and had the most charming smile. She remained my favourite heroine for very long, till after ‘Sangam’. I still feel that no heroine of today – size 0 or not - can hold a candle to her when she was at her best. She did not do many Thamizh pictures, but those she did were great. Her dance with Padmini in ‘Vanchikottai Valiban’ remains one of the screen classics ever.

She ruled over the Hindi screen with the great heroes she costarred with – Kishore Kumar and Pradeep Kumar earlier, and then Dev Anand, Dilip Kumar and Raj Kapoor.

So when Viji called and said that Vyjayanthimala would be coming home, I was excited. Quickly changing into a more presentable saree (I had already got into my nightwear), and patting my hair into place, I went downstairs to receive her. I opened the gate when the car came and she, sitting next to her son in the front, put out her hand, and said, “Rajalakshmi (my full name,) can you please hold the gate open?” I was disarmed.

That set the tone for the rest of the visit. She was all charm and grace, and we relaxed, and told her how she, among others, had filled our thoughts of films and film actors. 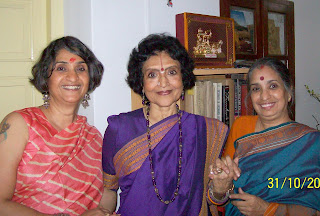 When I asked if we could take pictures, she immediately agreed and got up telling my mother to keep sitting, and stood behind her chair and posed (see picture at the top). Several clicks later, we were back to chatting, and she told us about the dance programme she is presenting this music season. At 70 plus, she is still thinking up new themes and rehearsing rigorously. No wonder she is so slim.

When my mother mentioned that my birthday is on the same day as hers, she appeared delighted, and shook hands with me all over again. Now, I can understand my being delighted, but her? There was no need for her to appear so. That, I suppose, is the secret of her charm. 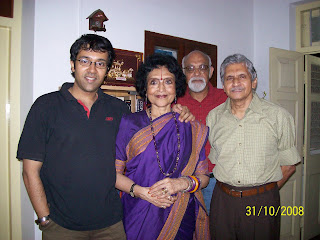 Incidentally, she lives barely 5 minutes away from us on C. P. Ramaswamy Road. She was amazed that we were practically neighbours, and had been so for the last 40 years. My husband, thinking this an opportune moment, mentioned to her the overburdened condition of our road, and asked her what she could do, as a former MP of the locality. Suchindra, her son commented that they were also victims of the weird road rules – he had no direct access to their home from the main road.

Granted, that I am not the star struck teenager of the 60s, nor she the reigning queen of the silver screen today. In spite of that, she bowled us over with her matter-of-fact manner and total lack of airs.

My mother remembers her from an earlier occasion too as a nice person. At the investiture ceremony at Rashtrapathi Bhavan, New Delhi, in the 1970s, when my mother and her sister had accompanied my father to see people receive their Padma Shri and other awards, my aunt had gone up to Vyjayanthimala and asked if she could hug her. And the star had easily agreed and hugged her back.
Posted by RAJI MUTHUKRISHNAN at 10:24

Suer cool, that was!

Also in Irumbu thirai - she completely over shadowed Saroja devi

Your photos are pretty...

Smile for You and See You later !

Did you tell her that you share her birthday?

PS I was shocked to discover how gorgeous she was! Gemini has no taste.

I remember seeing her in some some old tamil movies many years back. She was a rocking star then.

Thanks for dropping by my blog...Thomas

My God..she looks fit even at seventy!!

Tatoo, lovely earrings, long necklaces,colorful Bangles, unique rings, designer watch, large borders
on bright Sarees.. and the smile on the ladies faces..
What can I say, it must have been an
occasion everyone wanted it to be..

wow so cool! u r excused for not inviting me over to see Vjayanthi mala but if Big B ever comes pls remember to call me :-)

Oooooo!
Vyjayanthimala at your house? (~_~)
My eyes are going topsy turvy! Lucky you!! I hope you have taken her autographs not one but many.

Celebrity visiting home is sure a great occassion.

Who's Vyjayanthimala amidst the three in the picture?

Everyone is looking so happy on these pictures.

DOnt say 'Vyjjanathimala'????
Say 'Vy not jayanthimala'?
Nice to see what fun it all was!

first, a big SORRY..if my words were harsh in my response comment to you...i's in a mess until may be noon today...i really feel sorry, that I had spoken those to whom i had respected so much..But Raji, even if its my father..i talk my mind straight..i have to..its a matter of my survival:)
hope you understand...

Now this ..Vyjayanthimala -- such an endearing personality...really nice to see here sharing some ood moments with you...

Nice post, and nice presentation of a most-admired actress of indian cinema...

lastly, again -Please forgive me for my words...

Real red-letter day for you! I'm not much of a movie watcher or buff :(. VB looks lovely - complements your blog!

That must have been a supercool day. You speak highly of VB's charm, I'm sure her blog (if he had one) would talk about yours!
Older ladies are more hap'ning than boring youngsters these days, for sure :)

VB - why does she have that long sindoora gopi? I have always wondered. it must have been pretty interesting, I guess. hopefully you did not discuss movies!!

Can't understand the purpose of it at all. Is it to boast to friends
(a typical Indian trait)and whoever cares to listen that a yesterday's cine star visited your house? Would have been something if Dalai Lama was there with you. But then India is one big Bollywood for the Indian middle and chattering classes. Wonder whether your sister would have been allowed as far as Vyjayanthimala Bali's house's gate in her Bollywood years. Three old ladies, the same old tale.

Raj Kapoor was not tired of South Indian actresses particularly if they were dancing damsels- Vyjayanthimala, Padmini and Hema Malini. Dr Bali was Raj Kapoor's physician. The plot thickened then but who cares now. Any photo opportunity with actresses of any age and era not bad for the soul it appears.

Some one photographed recently Doris Day walking in a Califonian suburbs carrying plastic grocery bag. She gently and gracefully faded away. Thee is a lesson there.

Yes, Blogeswari. She was the superior dancer - and Saroja Devi looked like a poor cousin.

Webradio, thanks for stopping by so regularly.

Anonymous, she was gorgeous.

Hpy, Yes, everyone does.

Gardenia, Swarna, Maddy, it was fun.

Gurooji, how nice and I forgive you for saying 'old ladies'.:)

Swami, feel free to skip the posts by/ on old ladies.

Raji, That was rocking. So cool. Can i add anything else to say how 'with it ' you hep young ladies look in contrast to the serious men as Anonymous says.
What a lovely occasion. And Vy seems a gracious lady. You handled it all so well. And took some great photographs for us to share. Maiji looks more regal than anyone else.
The vanjikottai song is real treat to watch. How fresh faced they look and how utterly graceful they are. And how lost poor hapless Gemini looks. Just like real life.:-)

This was a great visit ! This woman looks so fit in her seventies ... that reminds me one more time how oimportant it is to do physical exercise no matter how "young" we are !!! thanks for the video too !

Edited by a Blog Administrator

The post is about Grace, beauty and
Joy of living..

You will never understand..

Namaki, Kallu - She is remarkably fit; she played golf till recently. and dances Bharata natyam regularly.I am glad you liked the video, it is one of my evergreen favourites.

Anonymous 3 - I think you are so right about her.

I am amazed to see the photo of Vyjayanthi Mala with your mother. Both look very charming and cute.

Vyjayanthi Mala was a great beauty in her younger days. I am a great fan of hers too. She was a glamour doll. Padmini was also one of my favorite heroines. Both were great dancers. Padmini was a good actress too. She acted in many character roles.


Vyjayanthi Mala ruled the Hindi Screen for many years until Hema Malini took over. Then came Sree Devi.

The photos and the video you posted are excellent. Your presentation is fantastic!

Have a wonderful day :)