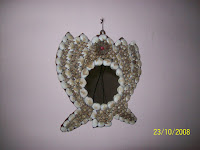 . . by the sea shore.’ That old tongue twister used to make me wonder who collected the shells she sold. Today at the beaches one does find people selling seashells – made into dolls, fixed decoratively on mirrors, or just plain chains, and tourists buying them.

When we were children, one of the thrills of going to the beach was walking barefoot in the sand, allowing our feet to sink into the warmish, wet sand as deeply as possible and curling our toes. And then walk closer to the waves, skirts lifted right up to the knees and pants rolled up, and let the waves come and wash our feet, while we would retreat squealing with delight, asking for more. 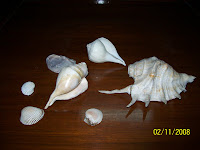 And then there was the pleasure of looking for shells and collecting them, having an impromptu competition amongst ourselves to see who had the most, the prettiest, and so on, as only children’s minds can think up. We never thought about what we would do with all the shells we picked up and carried home, sandy and grainy, but take them home we had to. And empty them into old chocolate tins reserved for the purpose.

We did not care after that. But my mother is very resourceful and artistic. She used the shells in a very creative way to show each one off individually. She took small circular boards (like the base of cakes) and heaped loads of wet cement on it forming a tiny hillock, about a foot high. She pressed the cement hard to make it stay firm, and while the cement was half-wet, she pressed the shells into the little mound, with the prettiest one on top. Some were shells her grandmother had collected from Rameswaram. 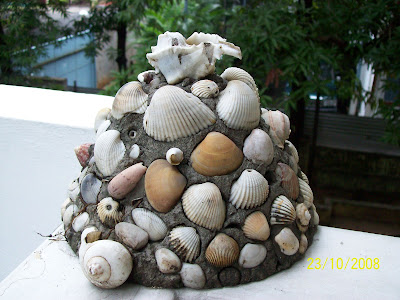 One of them is the conch on top of this mound. I have one she made all those years ago, and to my knowledge she made at least three more. 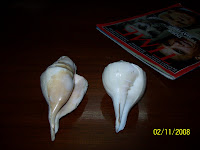 There are uses for shells too. Small shells, called conches (shanka) have been used to feed milk to children. Milk is poured into the body of the shell, and the narrow lip is placed in the mouth of the child and the milk drips in small quantities.

Bigger shells which are called conches, are used to blow into on auspicious occasions like weddings and poojas. Our legends speak of the gods and their conches. Lord Krishna blew on his shell Panchajanya during the great Mahabharata war.(Picture courtesy Internet)Most conches spiral to the left, like the ones here. The few that spiral open to the right are called valampuri conches and are used for religious rituals. My father-in-law had acquired one, and used it for pooja. (See below) 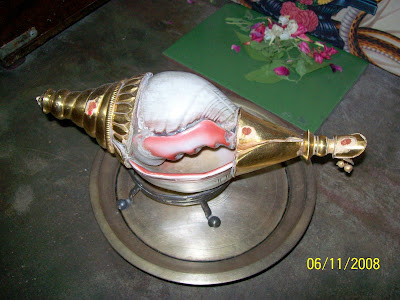 A picture that haunts my mind is the illustration of Rosamunde Pilcher’s ‘The Shell Seekers’. It was in a magazine along with an extract of the novel, but it was so many years ago, and I am not sure which one. Two little girls on the beach, one stooping to pick up a shell, and the other watching. I was pleased to see a similar picture on the net enititled ‘The Shell Seekers’ – maybe it is the same? 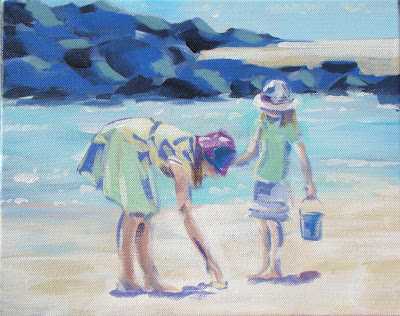 Copied from here.
Posted by RAJI MUTHUKRISHNAN at 21:00

Raji
Shells are things which will always have memories associated with them - there are those shell-sellers who etch a name on to shells - the better to remember with.
I recently found a conch - made of terracotta. Since North Indians blow the conch during pooja, I decided my Uttaranchal friend could make use of it.

Oh...what a lovely, evocative read!
You've left me dreaming of the beach and incapable of any work today ;-)...thanks!!

'Pearly shells, from the ocean,
Shinin in the sun,
COverin' the shore
WHen I see them, my heart tells m that I love you,
More than all those little pearly shells....'

Yes I remember that was a major tongue twister then and even now. :) Nice collection of shell stuffs you have.

Lovely.
I did not know about the conch being used to feed children - what a terrific idea!
At this ripe age, I still get a thrill when I find an intact shell on the beach.

What a lovely post and blog .. thanks for visiting mine!

reminded me of going to cape Comorin - that was where we always got the most interesting shells. little did the humble conch know that it would be nearest to gods!

now that brings a question to my mind - how did conch shells get associated with prayer - especially the valampiri ones? check this
http://www.richardshawbrown.com/mysticarticles/laxmi-conch.html

wow! your article brings me back to my childhood too ! I used to live by the sea (near Saint Malo in Brittany - France)and in the summer time I used to spend my xhole holiday on the beach ! We would collect sea shelles too and make necklaces and dolls ... In your article I have learned about the sheel for feeding milk to babies ! how clever ! the love the one your stepfather has bought for his religious ceremony ... thank you Raji !

Swarna, I too have a conch with a name - not mine, but an event engraved on it, so we will remember the occassion forever.

Gardenia, that song...so many memories

Kamini, isn't it a good idea? The paaladai or kovarnam, with which babies are fed milk, is modelled on it.

Daryl, thanks for stopping by. Do come again.

Maddy, I know - many of our shells were collected there. And thanks for the link to Lakshmi conch.

Namaki, Our forefathers made best use of esources, no? The one for the religious ceremony is encased in gold, to preserve it better.

Devika, nice to see you here.

Namaste madam I have sent a mail to ur mail id pls go through tat.