CENTENARY - AMMA WOULD HAVE BEEN 100 TODAY 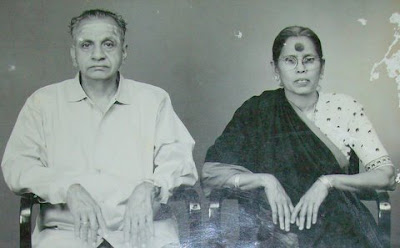 At birth she was named Narayani, and at the time of her wedding, it was changed to Parvathi. I had once mentioned to her how well her name matched with my father-in-law’s, which was Paramasivam. It was then that she told me how it was changed – it was a fairly common practice then, she said.

She was born near Thanjavur in 1908, and after her marriage in 1921 settled down in Kozhikode in Kerala, where her husband practised as a Chartered Accountant. He belonged to Madurai and had studied in Madras, before moving to Kerala to practice. In fact, he was known as ‘Auditor’. Till 1976 they lived in Kozhikode, when they moved to Madras to be with their children. My husband is their third son and seventh child – they had five sons and five daughters. Two of his brothers also lived, and still do, in Madras.

Amma was a strong personality, and extremely efficient. With Appa busy with his auditing work and running of his estates, she managed the family herself, taking care of all occasions, and bringing up the children. Soon after I got married in 1967, I spent six months with them in Kozhikode, while my husband was in Madras. That was a great opportunity for me to get to know both of them, and to develop the strong bond with her that lasted till she died.

It was rather quiet for me to be there with no one except Amma and Appa, and the youngest brother who went to the REC there. I am the eldest in my family and at the time of my marriage, we were a noisy houseful in Delhi with my four young brothers and sisters, and my father’s parents. It was a kind of culture shock also – the lifestyle was so far removed from the one I was used to - right from the lack of running water to having to cook on mud stoves with firewood. But Amma’s affection and consideration made me feel at home and comfortable, and she made sure that I did not pine for my parents or home. She spent a lot of time talking to me about the family, relating various incidents and anecdotes, and I had the privilege of looking at some skeletons in the closet, too. She sent me to music classes, and made sure I got my quota of entertainment by asking my brother-in-law to take me to an occasional movie.

Amma had this wonderful capacity to include all who came in her ambit into the circle of her affection – extended families, friends of friends, neighbours and passing visitors. Everyone who met her could not but feel that warmth and sincerity.

When her husband passed away in 1983, a part of her died. (This picture was taken in August 1982).Later in the year, when her daughter died from cancer, she was grief-stricken, but somehow found the inner strength to rally round and make practical decisions for the bereaved son-in-law and grandson. Those decisions charted the way to a bright future for the grandson who was barely 20 then.

With the next generation taking over the running of the house and managing domestic chores, and her grandchildren grown up, Amma spent a lot of time in pooja and reading books – religious and others. She approved of education for women and had progressive views on working women. She admired Indira Gandhi greatly for her strength and ability to run the country. Amma taught the domestic help how to read and write, setting aside a particular time of the day for that. With a ruler in hand she taught the then 40 plus Muniyamma the Thamizh alphabet, and then to read and write. Today Muniyamma reads the Thamizh newspaper comfortably and is aware of ‘naattu nadappu’ (goings-on in the country) as she calls it.

Amma had some strong old-fashioned views on other matters. She did not care for youngsters in the family going and settling abroad after studying there. Her first son had moved to the USA in 1970s, and she had never thought much of that decision. But she went with the flow, while making her stance clear. When a couple of grandchildren chose their own life-partners, she was no less vehement. She blamed the parents for not arranging the children’s marriages in good time.

My husband encouraged her to write her biography, which she did over the years. She wrote in Thamizh about her life from the time of her birth to 1978, when the 80th birthday of Appa was celebrated. We made copies and shared it.

She could not attend my son’s wedding in Trivandrum in 1996, because of a fracture she had sustained a couple of years ago. But she held the fort here, and had everything organised for the post wedding ceremonies like the sumangali prarthanai, and the reception.

Throughout her life she enjoyed good health, suffering only from occasional bouts of migraine - and that one fracture in her old age. Unfortunately in 1997, when she was 89, she developed breast cancer. She recovered after surgery, but died a few months later. She had seen her grandchildren and great grandchildren, and in some cases her grandchildren’s grandchildren.
Posted by RAJI MUTHUKRISHNAN at 12:34

This was such a loving tribute, Raji!
'Amma had this wonderful capacity to include all who came in her ambit into the circle of her affection – extended families, friends of friends, neighbours and passing visitors.'
How true - for her I think I was like another granddaughter. I can never forget how, when I spent several weeks in Madras in '92 and the girls went to the pre-school near home, it was Patti who fixed up a rickshawala to pick up and drop the girls!

I truly enjoyed reading your account. I could imagine how it must have been. Looking forward to reading more of your time back then, and yes more of those lovely pictures as well :)

Next we look forward to some of her translated works in your blog.

Reached your entry from Mysore blog park.
Salutations to such elders! That was a wonderful birthday remembrance. Reminds me of my (blind) grandmother...

Such affection Raji for your mother-in-law. Really good to get away from stereotypes

I continue to be amazed by her aura of authority and her assuredness.

She towered over all of her children, their children and grandchildren, and those of her brothers and sisters. But she never used her power without love, or unfairly.

Sometimes when I think about her I find that I have to remind myself that she is no more.

Nice to read such a heartfelt tribute. And also to know more about the woman you often mention in conversations!

yes, like indrani said you could start some translation work and get it published..

i recall your Calicut mentions, and having seen the REC mention, i saw another common link. i am an REC product myself.

Took memories back to my own grandparents and the house they lived.

Gardenia, yes, she had a soft spot for you.

Swarna, thank you for stopping by.

Kallu, bottom line was - I loved her.

Pradeep, thank you for stopping by

Anonymous, so true. As children you would have felt the impact of her love and strong personality greatly.