'BELLS ON HER TOES'

I have just got myself a new pair of metti - or toe rings - my favourite item of jewellery. The ones I bought now are a largish, heavy pair, which will reverberate with gentle clunks whenever my feet touch the ground. Sheer indulgence.

Traditionally toe rings come in sets of pairs, two to each toe. Married women wear these silver rings on the second toe of both feet to proclaim their matrimonial status - rather like the mangalasutra. It is said to have the additional virtue of absorbing any transgression (paap/paavam) on the part of the wife, if her foot falls on the husband unintentionally at any time ( am not giving any ideas to angry wives). Today the toe ring has become a fashion accessory.

One of the sweetest stories about toe rings I have read is one from the Ramayana. Rama and Lakshmana are wandering around in the forests looking for Sita, who has been abducted by Ravana. A vanara comes to them carrying some jewels and asks them if they belong to Sita. Rama asks Lakshmana if he can recognize them. Lakshmana answers he can recognize only the toe rings, he has never raised his eyes to look beyond Sita’s feet!

I have worn my way through several pairs of toe rings. My first set was obviously worn on my wedding day. It was a pretty pair with the rings not smooth, but twisted in a plait, and had three little bells on each pair, which tinkled sweetly each time I took a step. Very, very bridal. But the toe rings had this habit of slipping off my toes when I wore them with sandals, and getting catapulted two feet away, possibly because of the straps of the sandals. One evening when we went out this happened once too often, and I pulled them off, and as I wasn’t carrying a handbag, asked my husband to put them in his pocket. He promptly refused, saying he could not possibly put in his pocket anything I had worn on my feet. “You will be asking me to put your slippers in my pocket, next!” he grumbled.

Soon the bells fell off, one by one, and I did not like to wear the toe rings with just the vacant little loop. So I exchanged them for a plain pair. I cannot remember a time when I have not worn them - except maybe for the couple of years we were in Manchester in the early 1970s – they did not fit comfortably under the shoes I had to wear. Over the years, the toe rings did wear out, and I kept exchanging them. After all, wearing toe rings is said to be good for the wearer's heart.

On one occasion, I had decided to get them replaced just before Diwali, 1975. I chose the traditional pattern of plain pairs of rings, and tried them on in the shop. They seemed a tight fit, but the assistant assured me that it would get looser and so I walked away with the pair. I wore them the day before Diwali, and they did feel a bit tight, but I did not think much of it.

By evening my toes had started to swell and hurt quite a bit, and I decided to take them off. I had to attend my friend Nalini’s dance performance that evening, and I did not fancy enduring pain instead of enjoying the performance. But when I tried to pull them off, they wouldn’t budge! I could rotate them gently bit by bit on my toes, but pull them out I could not. I decided that I would wear them - and bear the pain. And so I limped my way to the event, and while Nalini danced on her henna painted toes on the stage, I went through a series of toe tapping all my own in the audience.

Back home, we had another session of let-us-remove-Raji’s-metti. It was my niece’s first Diwali after her wedding, and there was quite a motley group at home. Everyone was helpful and free with suggestions. Maybe a couple of them grumbled – why did she have to change her mettis NOW? But mostly there were positive ideas – one said use soap - we had already tried this basic method and it had not worked. Another said pull them out by force. My husband had a brainwave - run some twine under the rings and then pull. It took some time to coax the twine under the rings, but after about 10 minutes of manouevering it was done. He pulled it out and grabbing both ends pulled hard. The toe rings came with the twine, to me it seemed my toes too had, so agonizing was the pain. But the relief after it came out! Now we had to pull out the other pair. But no amount of manipulating allowed the twine to go under the rings. The rings were simply too tight on this toe.

“Let us continue tomorrow, it is too late today,” said my husband, as though it was a cricket match. So the next day, after the ritual oil - bath and sweet eating of Diwali, we tried to work on the toe rings again. I did not dare complain of the pain, which was quite bad. The toe had itself turned a kind of deep blue, and the general opinion was that I should go to a doctor now. And so I limped, and my husband walked, to the nearest doctor who was open on Diwali morning – Dr. Ravindra Padmanabhan. I had been to him a couple of times when the children had minor ailments. I was extremely embarrassed to tell him the problem – alas! what pains we women subject ourselves to just for the sake of adornment.

He looked at my toe, and tried to prise open the rings – the toe rings are left unsealed and can always be forced open or closed, to adjust the size, but preferably without the toe inside – but that did not work. He then told us to come to his house in an hour when he would be back there. “My father’s tools would be a better bet,” he said. “He is an engineer.” I trembled – what ‘tools’? An hour later while I sat in trepidation at his place, he sterilized a pair of pliers borrowed from his father’s toolbox, anaesthetized my toe, and after a brief struggle broke off the toe rings, and pulled them off. The relief was so great, I nearly fainted. 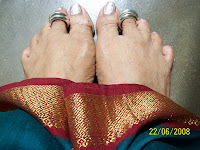 The experience did not stop me from wearing metti. I waited for everyone to forget the incident, and went to the jewellers’ to get another pair. This time I made sure they were of the proper size.

And now I am looking at anklets, which I have never worn before.
Posted by RAJI MUTHUKRISHNAN at 22:53

I'm so sick of reading 'Ring Tones' that I was delighted to read about 'Toe Rings'!! Toe-tally entertaining!
Wish men had to wear some uncomfortale signs of marriage - I'd love to see my old man hobbling and cursing over tight toe rings!!!

Probably angry wives remove the metti, while booting the husband?

If only all married girlfolks wear mettis, men's eyes would never raise.

Loved the closing lines.. "The experience did not stop me from wearing metti. I waited for everyone to forget the incident, and went to the jewellers’ to get another pair." :-)))

A nice write-up on bells-on-her-toes, threading it with humour and info. Enjoyed it

Nice entertaining read, Raji:-)
Mine fell off just like yours after the wedding and I never bothered to replace them. Ooty's shoes and socks culture was a good excuse.
The next time I was forced to wear a pair was at my daughter's wedding two weeks ago. Since my feet would be on display for the patha pujai, my cousin insisted I should wear some.
But really nice to know someone really enjoys them so much.

Is your wedding anniversary drawing near by any chance ;) ?
Toe rings, Anklets and all.
Nice read. :)

“Let us continue tomorrow, it is too late today,” said my husband, as though it was a cricket match.

I love to wear metti, but had to remove them because of RA of joints. Just occured to me after reading your post...I could try the next size.

Gardenia - Men wearing uncomfortable signs of marriage? I have seen many wearing it - a harrassed expression.

Kallu - Yes, they are uncomfotable with closed footwear.

Swarna - go for it. I am told that some of these traditional jewellery apply pressure on certain points beneficially - like acupressure - to improve our health, and cure som problems. Toe rings, anklets are some of them.

last karvachauth, i gave dee a pair of dainty silver anklets. how me and a north-eastern friend of mine managed to buy those, that too at the last moment is a long story...but the point is they were a bit tight for her and she decided to turn them into one single piece of bracelet for her pretty hand. what has happenned to them after that, i seriously have no idea.
good that i remember now ;)

Adi, thanks for stopping by. Get her another pair that fits.

Raji this reminds me of poor Venky , who, one November night in Nainital 34 years ago, had to go metti hunting as his bride of approximatley four days had lost one and was inconsolable. He came back triumpnhant only to find that she had now somehow managed to lose her ring; it had fallen into the (yech) comode along with the soapy wash water. He retreived that too. Maybe he wondered if some day she would throw his future babies out with the bathwater too.Good person to have around for sure and oh did I( the now 34 year old bride of course ) missed him sorely in Italy last week when one metti mingled with the shingles by the Lake Maggiore.

castle @ Silver Anklets Online lover said...
This comment has been removed by a blog administrator.
21 March 2016 at 22:09

Good read.Sprinkled with subtle humour that left me grinning ear-to-ear.Love this piece of jewelry as much as this post !

Entertaining,, humourous and liked the doctor turning to an engineering solution when his bag of tricks did not do the job.