RANDOM THOUGHTS ON A HOT DAY

It has been more than ten days since I posted something. My e-friend wanted to know why. No, it is not the internet service; that has for a change remained connected, thank goodness. But various other reasons.

There was a function in the family -the upanayanam ceremony of a young grand-nephew was performed. 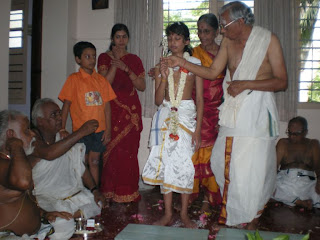 An eleven year old lad who is studying in Boston, Tarun came here from cool climes, and surrendered himself to the two day ceremony without a whisper of complaint. The heat was enough to send even hard core Madras-vasis into irritation mode. So hot, that mamis attending the function had foregone the mandatory Kanjeevaram silks, and settled for lighter substitutes. But the child, transplanted like some snowdrop from the cold weather into a hot tropical clime, did not give in and wither, shrivel or wilt, but braved the heat and the smoke from the ceremonial fire, repeated the mantras, and behaved brilliantly. Everyone was impressed with his compliance and good behaviour.

A couple of days later, we asked him how he was doing. He floored us with his answer, “I think I made the biggest mistake of my life.” That set us thinking.....

......The heat has been enervating, and dehydrating, drying up everything including what little imagination I have. And, to cap it all, the domestic nightmare every Indian housewife dreads – the maid doesn’t turn up.

In my case, I have very good support from mine and have grown used to her – she has been with us (though not live-in) for the last 20 years. She anticipates my every need and works accordingly. Poor woman, she is quite ill and hasn’t appeared for the last five days. She works in three or four other places as well, and therefore tries not to miss more than two days of work at a time.

That led me to think about our dependence on them. How much simpler our lives are because of their presence. And this was one of the things I missed most when I visited my children abroad. Granted there are machines to do the washing and washing up, and there is hardly any dust or dirt pollution. But a hundred other things that the maids do – like folding the washed clothes, dusting, cutting the vegetables, cleaning up after us, sweeping the yard, dashing to the shops in an emergency – that are not tough, but take up time.

In earlier days washing machines, mixies and grinders, and other helpful gadgets were unheard of. Whenever the maid was absent, with the arrogance of youth and good health I would take it as a challenge to do the chores, all the while promising to give it to her when she appeared next! But in my mellow years, I find it is not so simple. And the poor women who work for us, they also grow old and fall ill. If they are lucky their children take care of them. Otherwise their plight is pathetic. An organisation here in Madras called INODA has launched an insurance programme for housemaids – the employers have to pay a nominal sum every year, and the maid is covered in case of certain accidents and illnesses. I think it would be a good idea if more publicity was given to this scheme and more employers provided this basic cover to their maids.
Posted by RAJI MUTHUKRISHNAN at 06:28

"An organisation here in Madras called INODA has launched an insurance programme for housemaids –" Bravo. Yes, this needs to be publicized. Raji, you are right, our lives become so much simpler because of the help at home.
Good for young Tarun who bore up so well, and bully for the mamis who didnt stifle themselves with silk.
'transplanted like some snowdrop from the cold weather into a hot tropical clime' - so well expressed!

nice post, but sadly lived true to its name... RANDOM it was. and in particular, sorry to point out, but was too random. only a few like Anita Desai, Sidney Sheldon and Maiji have the ability to seamlessly integrate various thoughts... u and i need to work on it..

"A couple of days later, we asked him how he was doing. He floored us with his answer, “I think I made the biggest mistake of my life.” That set us thinking….

DOES NOT MATCH WITH...

"The heat has been enervating, and dehydrating, drying up everything including what little imagination I have. And, to cap it all, the domestic nightmare every Indian housewife dreads – the maid doesn’t turn up."

otherwise a delightful read, as always, and good pics. I was there when those Holy Words were uttered (the biggest mistake, not the gayathri mantra as you may think lol)

So, Boston boy is it :-)
Let me go meet him :-)
The poonal ceremony reminds a lot of things of my very own :-)
Truly fun experience!

Why does Tarun think he made the biggest mistake of his life?
And gosh the number of issues you took up in this post.

INODA definitely is doing a good job by launching an insurance program for the maids.

That house-maid thing is so true. You see, our house-maid was kicked out by her own son, and she needs to fend for herself, she feels bitter most of the time. And yes, congradulations for Tarun an all the best!! :)

What a delightful read! I LOVE random posts. You ought to teach Creative Writing...or are you already a teacher?

Very interesting read, raji. You have indeed covered a gamut of ideas.
You started with a very traditional ceremony and ended with a passionate plea for our own desi jeeveses.
Enjioyed reading this one.

Thank you , Gardenia, Lakshmi and Kat.

No, Mali, I don't teach Creative writing, but I am flattered you think I can.

Indrani, Tarun's mistake was, he said, agreeing to the ceremony. :).

Praveen, did you feel the same way?

And Karthik, I did say Random, and had no intention of 'integrating' or 'matching' them. Surely you have heard of the 'stream of consciousness ' style favoured by James Joyce and Virginia Woolf.

Oh, I loved my ceremony and I feel pretty nostalgic about it. I am a big supporter of Indian traditions and customs. According to me, every Indian tradition has a meaning to it :-)

Just a trivia, my mother's name is Raji too (though her full name is Rajeswari) :-)

Praveeen, I am happy to see thay you enjoyed your 'poonal' and that you love our country and its traditions.

My name is Rajalakshmi, but have been called Raji from childhood. When I was in England in the early 70s, it was simpler for people to use the shorter version of my name - though they managed to foul that up too by calling me Radi! - so I prefer the use of the shorter version except for official use.

Nice post and interesting thoughts. Feel sorry for Tarun though!
btw you must feel good about not bracketed with Sidney Sheldon and Anita Desai!!

Not Random at all.. truly strings of thoughts as they passed through you mind, that is how I feel . There def. was a link connecting all your thoughts... like, first it was the function which took place in this hot season which made you comment on the 'enervating' and 'dehydrating'( I liked those expressive words ) heat, which in turn made you feel your maid's absence and how we are all dependent on our helps, which of course is very true. And this naturally made you empathise with the tough life they lead and the NGO which is giving our helpers a helping Hand.
Raji,when are you going to publish your first novel?

that last para was an eyeopener.. who was that bright soul who started INODA? in the west people still find it hard to believe the maid culture we have...

upanayanam - just the other day i was reading about the three threads in the poonool..while researching for an article..

Hey! Nice post.
I'm hoping to be maid-free for the near future, what with my unreasonable maid--really. Random absences and all that fun stuff.