I recently saw the much touted ‘Om Shanti Om’, and it left me cold. Shah Rukh Khan was good as usual, but to me it now seems that he uses the same style of inanity – ‘Chak De India’ was an exception I think – to project the hero as a ‘good’ fella. The new heroine Deepika Padukone was passable. But the theme of rebirth was handled so badly, even if it was a spoof of older movies – a clip from ‘Karz’ of the 80s acknowledged that. Not to mention that the title of the film is the song from the movie. The idea of the appearance of the real ghost, in place of the person who was supposed to ‘act’ as the ghost of the murdered actress to frighten the villain, was lifted straight from that golden oldie ‘Madhumati’. 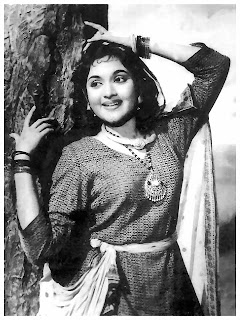 Made in the late 1950s, ‘Madhumati’ was released in 1958 or 59, I am not sure which. We were then living in Pondicherry, and Hindi films reached theatres there well after a year or two after they were released elsewhere. As for English movies, we could see them only on Sunday morning shows, many years after they were released. But the thrill of going to see a picture/cinema/movie was so great, that all these delays seemed trifles.

I used to find out about the newly released Hindi movies because of the songs which were broadcast from Radio Ceylon in those days. And ‘Aap hi ke geet’ and the weekly Binaca Geet Mala were sure-fire indicators of the latest in film music. And so, long before ‘Madhumati’ came to Pondicherry, I was very familiar with the songs composed by Salil Chowdhary. A song book sent from New Delhi, costing only four annas, gave me the right words. And I would listen to those mesmerising tunes on the radio. When the picture was released in Pondicherry, I just had to see it.

Going to a movie then was an experience to be savoured in its anticipation. First we had to get my father’s permission - his golden rule was one picture a month. Next he would direct us to ask our grandparents, who lived with us. They of course never said no, and Grandmother would also happily come along with us. The planning, the getting ready, and wondering if the driver would come to drop us in time, would we reach there before the documentaries and the ads started – all these thoughts would keep me greatly excited. Today, when we can have all this at the mere flick of a finger in our own homes, this thrill cannot really be understood, I feel. And not only that, today I just can’t sit through any movie for three hours – I am so used to the commercial breaks!

‘Madhumati’ was a joy with Vyjayantimala looking her best(see picture), and Dilip Kumar who was just perfect as a besotted, and later, tragic lover. Good story, lovely locales and divine music. I think the picture won many awards then – best movie, best director for Bimal Roy, who had also produced it, best actress for Vyjayantimala and best music, too. And Lata Mangeshkar, too, for the literally haunting piece, “Aaja re Pardesi”.

In Mumbai Bimal Roy’s daughter Rinki Bhattacharya heads the Bimal Roy Memorial Committee which is recreating that magic tomorrow with a special show at theatre Globus. Stars Vyjayantimala and Dilip Kumar will be present.

The video below is from the picture 'Vanchikottai Valiban' with Vyjayantimala and Padmini mesmerising viewers with their dance.

Posted by RAJI MUTHUKRISHNAN at 17:57

OSO is a good time pass andI don't mind seeing it again if I get time.

Was about to warn and you had seen it! Deepika requires lots of tinkering in acting. (this is the first time i am seeing her in my life and I donot know if she has acted well in some other films)

The movie-going-protocol's been captured hilariously. Dad's Golden rule has been amended these days? :-))

Song books, Radio Ceylon, Picturepost - what magic they created around a film...
A lovely read; and in time to usher in the brand new print of Madhumati ; not a colour print, thank goodness.

Thank you for adding the lovely song video.
I have never seen this movie, but Viji's narration of it is fresh in my mind!

yup - that was a salilda classic - i have not seen the movie but well the songs are great. have a longish blog coming up on salilda..soon

I love bollywood songs! Check out this site… it has awesome lyrics from thousands of songs

Raji, thoroughly enjoyed the song!!! Have heard it courtesy Sekar many a time but this was the first time I was "seeing" it.

Now, I have to see the movie.... Should look for one of those Moser Baer dvd!

Brought back many memories - of seeing the 'talkies' in general and Madhumati in particular. Vyjayantimala was lovely - a Nepali friend was stunned into a daze for a couple of days after seeing it.
Some twenty years on the magic was still there. A very close family member (who shall remain anonymous) went around with a silly grin for days after an errant table tennis ball was returned by Mrs Bali at the Ooty golf club.

All the 'Madhumati' songs were great. Salil Chowdhary outdid himself. It is said that Bimal Roy did not care for the 'Aaja re pardesi..' melody at first. But the song proved to be most popular. As for the magical 'Dil thadap thadap ke' , I was told that it is a copy of a Hungarian melody - well if it is, Salil C has done an excellent job of copying it. Another hit of his that was a copy too was 'Ithna na mujh se...' from Chaya, if I remember correctly from a Mozart melody.

OSO was fun to watch. Chak de was probably the rare movies where SRK doesnt portray the Khan image. it was down to earth and majorly because it was a real life story...