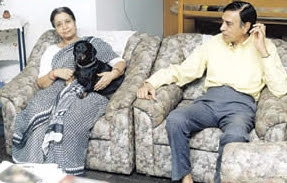 ‘Blogs are an endless ego trip. They can never pose a threat to regular journals or newspapers.’ So said Sujatha, noted Thamizh writer, who passed away recently.
Maybe not, but where else can I record my appreciation of him, and the hours of pleasure his works have given me.

Growing up in the North and going to a school that did not teach Thamizh, and then in Pondicherry where the second language was - you guessed it - French, my introduction to reading Thamizh came rather late – and it was self taught. I wanted to read Thamizh magazines to be aware of local events - especially the movies that were showing. Rather lowbrow tastes, but I still love movies. And then those little cartoon boxes with the jokes under them. My mother got fed up reading them out to us all the time, I am sure.

And that is how I started reading short stories in the magazines, captivated by the illustrations of Gopulu and Maniyan. And then came Sujatha, like a breath of fresh air, breaking the cliché of family themes in stories.

I remember reading his murder mystery ‘Nylon Kayiru’ first, which was serialized in Kumudham. And if I am not mistaken, that most popular lawyer Ganesh and assistant Vasanth duo made their debut here. This was in 1968. And I was hooked. I managed to read most of his works published in magazines. Any announcement of a new serial by Sujatha was an event to look forward to.

He could be the ever young Vasanth who would glibly reel off laws and rules, he could touch hearts with the serial ‘Kakitha Sangiligal’, where a renal failure patient cannot find donors even among the closest matches in the family. (There was a parallel in our family to this moving story, when a young niece donated her kidney to her husband). He understood the hearts of the devathais of Srirangam. His 'Karayellam Shenpagapoo' highlighted the charm of Thamizh folk songs, garbed in a thriller. He knew the pulse of the common man, and knew what would appeal, and used it freely to write dialogues for movies.

Somewhere down the line, I learnt that Sujatha was the pseudonym of S. Rangarajan, and that he wrote under his wife’s name. (See picture for the two Sujathas- source: Internet) . His articles on literature were published under his own name in magazines like Kanaiyazhi. I enjoyed his series of articles (some in question-answer format) on science and its nuances, and was awestruck by his articles on Thamizh literature - though I have no great understanding of either.

Here was a person whose knowledge was unlimited, ranged from science and technology to literature, and spanned many other fields. He was a scientist who worked in BEL, Bangalore. His contribution to the development of the Electronic Voting Machine has, I feel, not been recognised enough.

Sujatha had a wry sense of humour. He wrote that it was always the men who would come up to him, greet him and say something, but invariably followed it up with the statement, “Of course, I haven’t read any of your works, but my wife does regularly.”

His self deprecatory humour was evident when he claimed that the writer Rangarajan of Kanaiyazhi did not think much of Sujatha’s writings!

We will miss Sujatha.

A couple of links for the Sujatha fan
http://www.lazygeek.net/archives/2005/05/happy_birthday_dude_sujatha_ra.html
http://www.sujathalogy.com/
Posted by RAJI MUTHUKRISHNAN at 21:13

Raji, you said it all and so well.
Like you, I've picked up Tamil very very late though growing up entirely in TN. And Im still going through the popular writers. Thanks to you, I know what I should read first in Sujatha's. I will miss his insights as answers to questions in the mags. His wise presence though I hardly knew his work.

I was moved by your post. You have also done a good review about Sujatha Sir's works. Thanks.

I am adding this to my post
http://balaji_ammu.blogspot.com/2008/03/421.html
Which contains many links to posts written by bloggers as anjali to the great man !!!!

Raji,
my thoughts & feelings on the loss of such a great write seem to be matching yours, I also used to read all the stories mentioned in ur blog. It is a great loss to Tamil world, he was one generation ahead in terms of writing about IT and technology, that too in Tamil