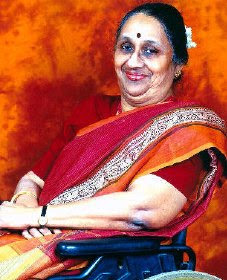 Today’s newspaper carried in its columns the news of the death of Mahema Devadoss. I was distressed to see it.

Mahema was a most pleasant personality, with a very sweet and ready smile. I met her first, about 12 years ago, when I went to interview her husband Manohar for our newspaper (I worked for a neighbourhood newspaper). He had just published a book, ‘The Greenwell Years’, about his salad days, and the book was illustrated with his pen-and-ink drawings - his forte. Though I was meeting them for the first time, they welcomed me so warmly and affectionately. One of the nicest couples I have met.

I remember the room where I waited for them - there was a portrait of M. S. Subbulakshmi, done by Manohar. Manohar came in and we started talking. A little later Mahema entered, in a wheelchair. I had not expected that, and it was rather a shock.

I learnt that in 1972, a few years after they were married and when their daughter was just a young child, they had been in a road accident, as a result of which Mahema was paralysed from the neck down. She needed help for everything – including getting into the wheelchair, and out of it. Manohar considered it his privilege to take care of her every need, day and night, though his failing eyesight, owing to an incurable complaint (retinitis pigmentosa) made his vision very weak over the years. And she, drawing on her inner strength, faced life positively – she conducted Spoken English classes at home, started writing, using a splint on her right hand to help her, and was a member of many fund raisers for charities.

After that first meeting, we were in fairly regular touch. Mahema even made the effort to attend my son’s wedding. Whenever she needed anything to be mentioned in our paper, she would call me and make the request so affectionately. ‘Rajima,’ was how she referred to me. And so does Manohar.

In the last few years, they have put to good use Manohar’s gift of sketching buildings and Mahema’s descriptive and accurate prose, to publish greeting cards for the festive season, and use the proceeds for charity. A well qualified woman, she had the gift of writing in chaste English, and took pains to research for the material.

Manohar wrote about her in his book ‘A Poem to Courage’ – a tribute to her great courage in the face of adversity. She was indeed one of the bravest and most uncomplaining persons I have known – and so is he.

Photo: Courtesy 'The Hindu'
Posted by RAJI MUTHUKRISHNAN at 21:49

My salutations to this brave lady. Herstory is very inspiring indeed.

BTW I tried to google chat with you,it showed you were available.

Raji, a touching and deeply felt tribute to a remarkable lady. It is so ironic that I read about Mahema and manohar for the first time only last week in a newsmagazine.

mahema and manohar , both are very talented and amazing personalities. you were fortunate to meet this couple.
yesterday there was some problem with the comment column.

I read the book on MS by TJS George, and if my memory serves me correctly, there is a portrait of her by Manohar in the book (not certain, though - it's been some years). It included an exploanation of how he went about making the portrait, and I was deeply moved by it. Thanks for this moving tribute to his other half.
Kamini

I've read about this couple so often. And they have always intrigued me. Your first person account of their life makes them more real, though still slightly unbelievable.They seem so much larger than life, larger than me with my petty troubles.
So well written, Raji

I am shocked to read this post. I met Manohar and Mahema not too long ago myself. In fact I believe it was in mid 2007 when Manohar had just published his latest book. Mahema was asleep when I had gone over to their house so unfortunately I could not meet her or talk to her but I knew of her inspirational life and her incredibly devoted husband. She was a person of rare strength and character.

We feel so humble when we read about such great people.

Bina, thanks for stopping by. You are indeed lucky to have known Mahema and Manohar so well.

Mahema Aunty and my "Uncle Obelix" Mano Uncle are old family friends of my dear parents. I have the fondest - ongoing - memories of the mirthful conversations and *fabulous* fingerlicking great saapaad we've enjoyed in their gorgeous old home. I've spent many days in their home; Suja was my childhood friend.

I cannot write about Aunty without including Uncle's name, automatically, in the same sentence...the "greatest love story ever experienced", filled with more humour, belly laughs and warm companionship that I know of.

Uncle and I were on the phone for just under an hour yesterday - he can talk like an old girlfriend, loda-loda.ne pesavaar! His voice broke just once, when he described the very last moments of Aunty's life soon after he teased her for mumbling like an 'aattu-kutti' :)

Special people. I am incredibly priviledged to have them in my life.
---
Update on 18 September 2008: Uncle is working on a series of watercolours. They will be used to raise an endowment in Mahema Aunty's name.

He is involved in charities that support the eradication of preventable eye diseases in Tamil Nadu, which is fantastic.

hello aunty, did not know that you know mr.manohar d. i have his book of sketches of madurai, bought from chennai airport, hope to get it autographed by him....

I got to know about Mahemano from TJS George's book on MS and then made it a point to get Greenwell years. I have always been amazed the postive energy of this couple and had a dream of meeting them in person some day at Chennai. But I realized by your post that it is not to be.

Ashvin, I am sure he will be delighted.
Anonymous, I wonder who you are, and where. Thanks for stopping by. Yes, sadly Mahema you will not meet, but you can still meet Manohar.

wow that was a long overdue response !!

I saw a column in The Hindu about a book on Perspectives. I was curious to find out what it was. I called up Manohar sir and did not know what to expect. I was surprised by the way he received my son and me. His failing eye sight was so bad that he could not see my son who was sitting next to me. He blessed him and wished him to grow up as Man of Character. I feel I am fortunate to have a met a person like him. - Bala