This is one of those things that you don't expect to happen in the USA.
Delhi, yes, Bombay, yes, and Chennai - all the time.
No water in the taps.
But in Hoboken, across the vast river Hudson from New York city? No.

Last Sunday morning, waiting to step into the shower, I found that the pressure of water was low.
Being a Chennaiite of many waterless days, warning bells began to ring in my head..
I alerted Sriram and Vandana, and they were also surprised.

A call to the apartment supervisor confirmed what we suspected - no water, indeed. and it was worse than we thought. It was not a maintenance shutdown that would have affected only our apartment building for a few hours, but a major shutdown in the city.
No water anywhere in Hoboken! And no one knew for how long.
We learnt that there was a problem in the neighbouring city of Jersey, and the supply to Hoboken had been cut off, to carry out repairs.

We Chennaiites are unfazed by waterless taps at home despite full wells and tanks in post monsoon glut, I still have a stand by of drums and buckets of water for two days' needs, not to mention coloured plastic pots in the kitchen filled with water for cooking. And mineral water for drinking - for who knows when the power might get cut or heaven forbid, the motor itself conk out!

The Chennaiite in us went to work and Sriram filled up a tub and a bucket for emergencies, by which time the water had stopped.

And nowhere else we could turn to for water. In cities in this country , there is no source of water except what the city gives you. Apart from bottled drinking water, of course. The river? In my mind's eye jeans clad men and women carrying pots/buckets of water from the Hudson, and hauling them up several floors passed by.

Vandana said that usually when supply was to be shut down for maintenance, there would be sufficient notice, and supply resumed in a few hours. But this was unusual, she agreed.
And on a weekend, too.

The day passed without water, and we thought of going to dinner in New York, for how could we cook? And local restaurants would have the same problem!

However, the need did not arise. For with the usual efficiency and efficacy found here, the workers must have located the problem and sorted it out, and by late evening, the water supply was restored. 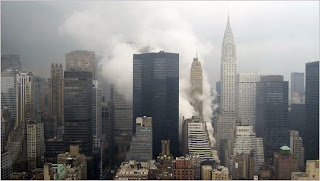 Smoke from the explosion could be seen between Park and Lexington Avenues at 41st Street in this picture supplied by a reader taken shortly after 6 p.m. (Photo: Eric Okumura)
Courtesy: The New York Times


Even as I am writing this, reports of a steam pipe explosion in midtown Manhattan, New York, are filtering in on TV news channels.
The steam is going right up like a geyser as high as the top of the Chrysler building close by. The TV screen is showing pictures of the steam gushing at great speed up and high.
Fire fighters and police personnel are at the spot - fortunately no reports of any fatalities, but some people have been seriously injured, some critically.
A city that has not yet fully recovered from the 9/11 trauma, is facing a similar situation - a devastation in that the water, electricity lines which lie underground alongside the steam pipes will also be affected.
Not to mention the underground railways, though reports say that the railways have not been affected. Three people from here go to work in the city by train. Shyam, Vandana's cousin is home, Vandana has yet to reach home; and Sriram says that his office being in Downtown, he won't be affected.
And they are home, now.
Posted by RAJI MUTHUKRISHNAN at 06:13

It happened on the West side of 41st and Lexington Ave. I was like a block away in the office. At first I thought it was thunder, but it just kept going for like over 20 minutes it seemed, and it was very very loud.

Very scary, the NYPD says it was not terrorism. They say it was a steam explosion. Smoke and steam went up over the 45th floor. There was no black smoke like a fire though. People were running down Lexington. It was pretty scary, I was positive while in the area that it was terrorism.

It happened right around the corner from one of the biggest creators of traffic congestion in NYC.

Will Mayor Bloomberg do anything about Park Ave. being blocked off at 42nd street?

I think Mayor Nanny Bloomie is a very arrogant man. I also highly doubt he rides the subway that much. He's the mayor, I want someone driving him around so he can work and make calls and stuff. New Yorkers shouldn't want him wasting all that time on the subway.

We all have to wonder what Bloomberg is really thinking of with this congestion pricing tax scheme. Maybe he mostly just wants a new tax. Just wrap it up in ‘concern for the environment’, and then people can just demonize those who oppose it.

If he cares so much about traffic jams, congestion and air pollution, why does he let Park Avenue be blocked off? Why doesn’t he do anything about that?

It's true, Pershing Square Restaurant blocks Park Avenue going South at 42nd St. for about 12 hours a day/5 months of the year! This Causes Massive Congestion and Air Pollution!

But apparently it does not bother NYC’s Nanny-in-Chief Mike “Congestion Pricing Tax” Bloomberg?

It certainly supports his claim that the city is hugely congested.

Check out the map! Tell your friends!

very interesting read. thank chennai for being waterless most of the time - it helped u being prepared mentally for this horrible experience. and thank our good ol' you-know-who as always (he-whose name you dont want mentioned in ur blog)... for simply sitting :)

sorry to hear about ur experience though...

a typical case of Rameswaram ponalum ......