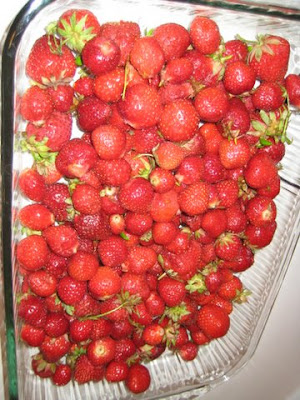 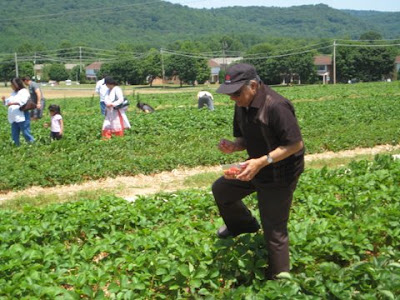 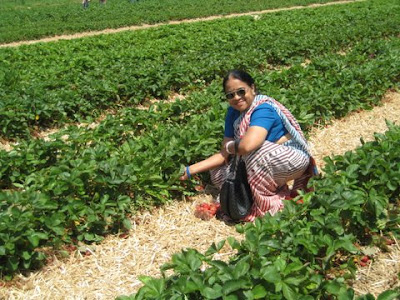 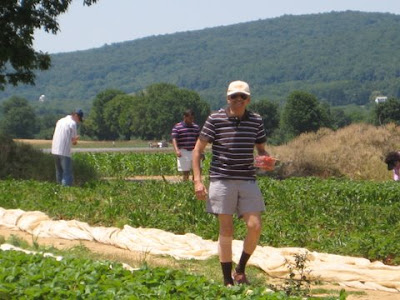 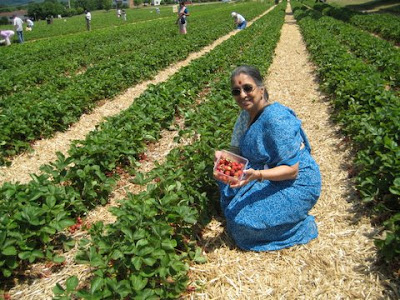 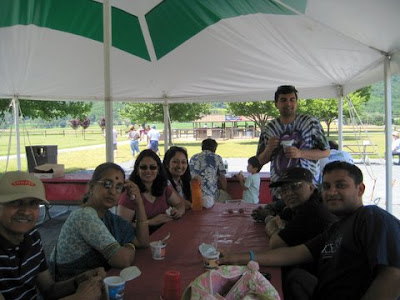 Vandana had organised the outing.
We were to go to a farm in the countryside, about 50 miles away from Hoboken where she and Sriram live, and pick strawberries.

Pick strawberries!
I baulked at the very idea.
I couldn't see myself involved in any physical activity, least of all climbing trees.
I struggled with visions of coconut plucking at home in Madras, where men, with dhotis neatly tucked in, ran up the palms and flung down the cocnuts; and mango plucking, where men below would hold sacking to gently collect the mangoes plucked and thrown down by men in the tree.

Vandana smiled mysteriously and promised me I would enjoy it.
The group included Vandana's parents, who like us, are visiting from India, Sriram-Vandana's friends Jaisri and Apsara, and Shyam, Vandana's cousin who is doing a summer internship at New York. Four seniors and five management types.
And so we went, packed in two cars to the farm.

It was a dream of a day, with blue skies and cotton wool clouds, and rolling hills in the background.
And strawberries growing on low lying plants, barely a foot high!
The motley group had a field day, rummaging for hidden strawberries among the low bushes.

We could pick all we could, get them weighed, pay for them and bring the fruit of our labours home.
And so we picked them, and despite creaking joints and recalcitrant limbs, I was able to pick quite a few too. The other seniors in the group were swifter and filled their little boxes soon.
The strawberries tasted as delicious as they looked, which can never be said of the ones bought from the city shops. The bigger and more attractive they look, the less luscious they are bound to be, I had discovered
But these, fresh from the vine, were rich and juicy.

A picnic lunch, with fresh strawberries for dessert, rounded off the day nicely.
Posted by RAJI MUTHUKRISHNAN at 16:03

Email ThisBlogThis!Share to TwitterShare to FacebookShare to Pinterest
Labels: Strawberries

Berry nice -- the word pictures as well as the pictures

u always have a nice way of saying things...