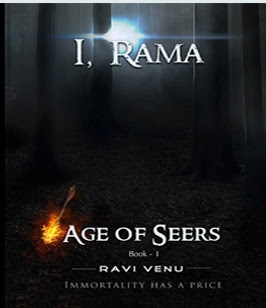 Ravi Venugopal is an entrepreneur based in the , and is currently in Chennai, taking care of his business from here, while working on the promotion of his book, I, Rama.

It is a story we all know, learnt at our parents and grandparents’ feet, and love - a story that never loses its freshness no matter how often we hear it or read it. My eight year old granddaughter loves the story and Rama with equal fervour.

There are reportedly about 300 version of the Ramayana, originally written by Valmiki. ’s book,
I, Rama, looks at this story from a different perspective. As the story unfolds we realise that it is the Lord himself narrating, in the evening of his life, the incidents of his youth and adolescence, to his brothers and sons, without losing his objectivity.

While Rama himself relates the main story, the tales of Dasaratha, his father, and the great sage Viswamithra, one of his gurus, are also in the first person as narrated to Rama.  The first person narrative brings the characters alive to the readers, and a little closer to them. We feel the impact the two seniors had in moulding the character of Rama.

I was impressed by the brisk style and strong characterisation, and the acuity that could see beyond legends. There are new dimensions to the characters of the two women. Kaikeyi is not at all the evil stepmother, but a warrior princess, who plans and wins battles. Her admirable foresight is the cause of Rama’s expulsion to the forest, which sets off the chain of events for the eventual destruction of Ravana. Sita is not just a demure maiden, as we have always thought of her. She is a bright person, well-versed in domestic affairs as well as the craft of warfare, and a visionary who thinks of welfare programmes. We get a glimpse of the strong-minded woman who would in the future hold her own against Ravana in Asoka vana.

As I went through the pages, I was amazed at the futuristic tone of the book. The powers of the rishis and asuras are supernatural indeed. (Do Viswamithra’s feet ever touch the ground, or does he just glide above it?) I felt convinced that they must have come from another world, to which there are portals allowing movement to and fro.  ’s narration makes it all so plausible and simple. The power of the weapons used in the battles is little short of nuclear - surely there must have been knowledge gained from outside our world, I felt.

It is obvious that a lot of research has gone into the writing of the book. It has always been a mystery to me how these busy young men, working full time, find time to write. And write not at random, but with due research. says that he bought many books, and also read up from the Internet. “I also have some senior gurus who guide me.”

Ravi has been in the for the last fifteen years, where he lives with wife Sri Lakshmi and daughter Ananya.  When asked “Why Ramayana?” he says, “I feel the whole picture is not clear yet. Who is Rama? Why is he important? He is living proof that there are celestials….and lots more”. His daughter Ananya is his inspiration for the book, he says.

Well done, . We look forward to the next volumes.

has his say here.

Posted by RAJI MUTHUKRISHNAN at 22:47

Thanks for sharing your opinions and thoughts this is great article!

From your review - It must be an interesting book especially the way he has handled the characters of kaikeyi and sita. Kaikeyi always portrayed as an evil queen and sita as an abala(helpless woman).

Raji, I would definitely like to read this book (if its available here).. you've made it seem very interesting plus the added advantage of getting an alternate perspective of Ramayana..

Hi Raji Mami, loved your review of the book. I had the opportunity of reading it and totally agree with your assessment of the book.

You are right. It is amazing how a full time professional finds the time to research and write an entire book while sticking reasonably to the original story line. :-)

very nice blog ma... i am happy to follow you..

this is myblog and i request you to look on to it.. i would love to get your encouraging comments..


Left on my site a link to this post. I think many people will be interested in it!!!


I have bookmarked it in my google bookmarks to visit later.