Between a mother who cooks,  knits, blogs and thinks nothing of getting up at 4 and making some vadam dough because the sun is shining brightly, and a sister who works full-time and cooks for hubby late at night after returning home, I stand out as a person who happily thinks nothing of doing nothing .

One morning last week I got up at my usual time and walked groggily to the balcony to get some fresh air. And this is what I saw. 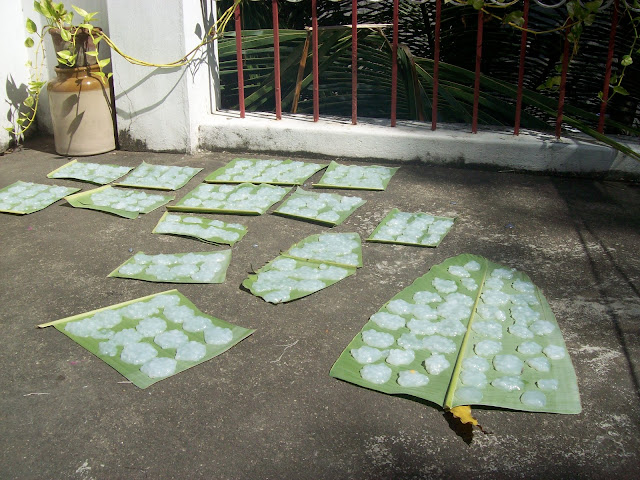 My mother had been busy - not wanting to waste the March sun, she had got up at 4 am and finished making the dough for the vadam and spread it out in cute circles on banana leaves which she had herself gone down and cut from the banana trees in the garden below! And all this before I had even woken up. (Every self-respecting Madras housewife  knows that this is the season to make and dry vadam, and store them to last through the year.) 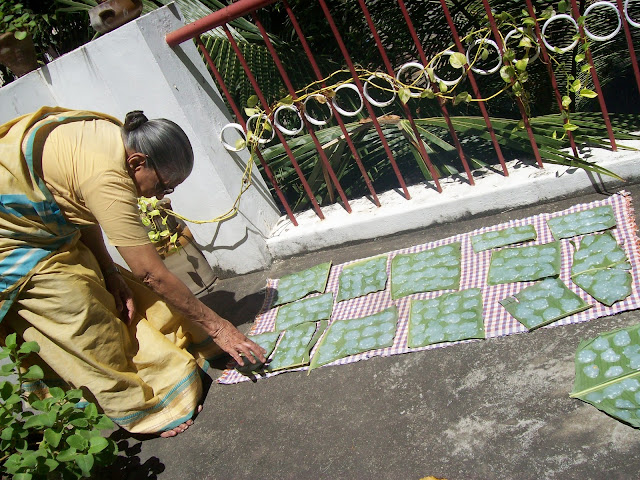 Enough to put anyone to shame. Fortunately, I am made of sterner stuff, and did not in the least feel any twinges of guilt. While she made sure that the vadams were dried thoroughly for three whole days, chasing the sun from this end of the balcony to the other, I (like the lilies of the field?) stood and took pictures.  The vadaams then took on a glazed and shiny appearance, indicating they were well and  thoroughly  dried. Then my mother laboriously removed them from the (also dried) leaves, and dried them once again - to be stored, and ready for frying.

But guess who was the first to congratulate her when she fried them and served them to be tasted? Oh, they were so good, crisp and white and fluffy!.

The next batch is being readied now.....

Posted by RAJI MUTHUKRISHNAN at 22:55

wow, such yummy crispy vadams. Nothing to beat home made traditional food. It's vadam time @my house too, only here it is made by MIL.

Don't worry about your lethargy raji aunty, you have company in me.

BTW read here, I too mentioned maaji in my blog.http://shreshar.blogspot.com/2011/02/life-begins-after.html

Such a pleasure to read about the Madras-veyill vadam making!

The images remind me of my Grand-Aunt-Patti ( Nagamani Patti of Cuddalore). To my little girl eyes, was the most beautiful woman I had ever seen - no makeup, tight hair0bun and busy preparing karuvapillai podi in that HOT HOT sun...deeeelisssssh!

Thank you for sharing these stories, Raji!

Well Raji they also serve who stand and take pictures and document with so much style and panache !! Loved the post and had a good , happy laugh . Ma is great indeed and two of you rock and roll (vadaam dough and so much more)

Looks very yummy!!! And this is my favourite variety of vadaam! The sight of this vadaam make me homesick now :-)

//Enough to put anyone to shame. Fortunately, I am made of sterner stuff, and did not in the least feel any twinges of guilt.// Not to worry, there's one more person. I am equally a similar stuff :-D

Nice post Raji..reminds me of my idle times back home...sometimes i wish i could live happily everafter doing nothing :)

vadam -- i remember our neighbours in Madras doing that -- we get homemade ones in shops here :)

Hats off to your mother Raj! like you, the older I grow the lazier I become...I am overwhelmed with admiration for Aunty.

my Maji too used to do this till a couple of years ago..i used to get all my masalas and vadams made by her for a long time..her mother, my grandmother did that before her!they are all pleasant memories of a bygone era..Every season had its special session of food making, preserving etc..Now its the chutney and pickle making season in Andhra Pradesh and i too am inspired by all our elders to do a little..three cheers for Lalitha mami!Raji, its okay being the lily in the field!We need them too!

Lovely! Brought back memories of my childhood. The best part of the vadam making process is getting to eat the semi-dried vadams, I think...

Lovely! Brought back memories of my childhood. The best part of the vadam making process is getting to eat the semi-dried vadams, I think....Yum!

Salutations to The Vadam Maker.
Let the next read be a post with pics of you doing a different variety, taken by Maiji, to be read in Maiji's blog... Wish you all the energy you will need for that!

Lucky you, enjoying those freshly made vadams! This brought back so many memories of my grandmother slaving away to make vast quantities of vadams!

Err...confession time...I dont wake up at 4 am either...shhhh dont tell anybody!

Lovely post! And was there much crow-chasing involved as well?!

What about samples !
Looks tempting.Thats how mothers are.They know what to do and when!

I could (and would) just eat the vadam even before its fried! But no one makes these things in my family these days!!

raji aunty, a tag and an award awaiting you. pl. check my blog.

:-) Takes me back to the days when we seemed to make a never-ending supply of vadaams and vatrals so that the "veiyal" did not go waste. :-). I just loved this post.

I've featured your blog in my "Sunday Special" today, Raji.

:-)I just posted a comment, but am not sure if it went through as I accidentally closed the tab.

Just love this post - reminds me of days when my grandma would keep insisting "veiyalla veenaakaadengo di" and we would spend all summer making various types of vadams and vatrals. After my mom passed away last year, no vadaams for me. Not because I can't make them - but I can't bear to do it alone without all the joking and teasing this compulsory group activity involved.

Asha, thanks! for the nice comment and the tag and award.
Bina, :)
Viji - you are good for my ego, like I said.
Vardhini, Devika, Radha and Vaidehi - thanks for all the nice things you say.
SudhaNSwamy - thanks for visiting.
Swarna - Maiji might do what you suggest but me and work? Nary a chance!
Kamini - I remember too.
Rakesh, :D
Varun - now you know!
Flowergirl - funnily the crows did not bother us this time
Dr. A - truer words were never uttered
ES - many of us just buy it nowadays
Vidya - thanks ever so much for including my blog in your Sunday special!

i am going to ask my mil whats vadam, then come back again and read this post again:):)

I admire your mum. The spirit to keep up with tradition and not slacking is commendable. And the vadams make everyone's tummies happy:))

Your Vadaams look delicious. Fancy, they are half cooked with solar energy, being dried under the sun.Interesting!

Makes my mouth water! By the way, have you tried eating the half dried unfried ones? They taste great too

Hmm..those Vadams look so inviting..don't know if d entire credit goes to Maiji for making them so well or part of it goes to u Raji for ur photography skills..Guess the best way to verify is to taste them personally..what say, Raji??
As usual, your blog is so endearing..loved it.