It is Diwali this weekend - and nothing outside the home to show for it. But so it was for Navarathri.

I was missing all the Navarathri fun, I felt, and I did miss the seeing the kolus of Madras.

So I was pleasantly surprised when my nephew and his wife invited me over for kolu. We went expecting an artistic arrangement of mementoes and cute toys. 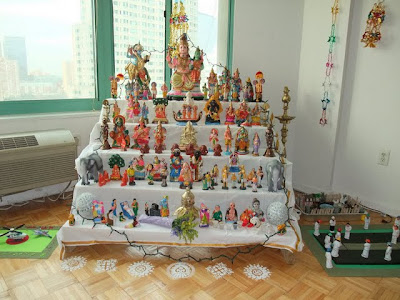 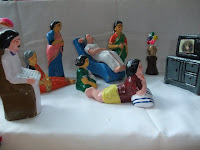 Imagine my delight when I saw a display on five steps (made with stuff bought from Home Depot - the famous do it yourself chain store) and lovely kolu bommai's on them in glorious bright colours. Shalini told me that they had brought the dolls over from Madras over various trips. I admired her - with a toddler and a five year old, and going to work, she had done a wonderful job - and asking people over too to visit the displays and feeding them ‘sundal’ and coffee! Shalini told me that some of her friends also had kolu displays.

This part of Jersey city where we live, called Newport, does have quite a few South Indians. There are many like us, parents who have come to be with their children and grandchildren for a while. And they have formed a kind of informal group who meet in the evenings regularly. Being a sedentary kind of character, I prefer to be at home and play with Samyukta.

Meanwhile I learnt from Jago,a lady who assists us with the cooking,that in another part of Jersey city there was a different kind of celebration on the Friday night of Navrathri.

We decided to check it out - and when we went there, I could not believe I was in the USA, and that this was not India. Such was the atmosphere that night. The main street had been closed to traffic by 9 pm, and there were police cars on either side to keep it blocked. We left home - Vandana’s parents and I,leaving a sleeping Samyukta with her father and grandfather. A stage had been constructed on the side of the road on which a lady and her group were singing popular dandiya numbers, to which everyone was dancing. There were young and old, men and women, some carrying babies in their arms,traditionally and colourfully dressed, all dancing away to the hypnotic rhythm. 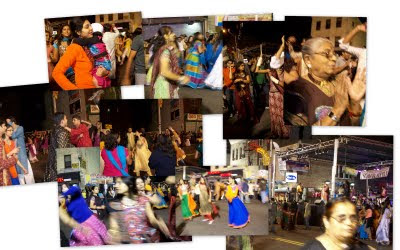 I watched open mouthed, amazed at this show of a part of India – I am told most of the Indian population in this area is from the North. Those present there on that day were mostly second and third generation immigrants, keeping the tradition of their country of origin alive. We watched for nearly an hour, the tempo never slowed nor the mood fade.

Funnily I have never seen a dandiya dance at home – Navarathri in Madras is mostly about kolu!

Let me see now what is in store for Diwali - the twinkling illuminations across the river are a part of every night. “Just wait till Thanksgiving and the Christmas season,” says Sriram. 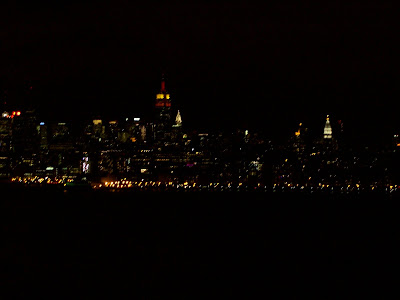 For Diwali at home, we have planned on celebrating as usual – new clothes, sweets and the other trappings minus the fireworks.
Posted by RAJI MUTHUKRISHNAN at 14:51

Happy Deepavali to you and to li'l Samyukta on her debut Deepavali!

Nice thing to know about Dasara in Newport.

Btw. I know what they do for fireworks in NY. They hire those contractors who actually burst them over the Hudson river in NY I guess!!

That's nice. Here in Wisconsin, we have a puja in the temple on the day of Diwali. But I would rather witness some fireworks :-)

A very informative post which meant an excellent read.The photo's too were good. Thanks for sharing.

Dandiya outside my window nine nights out of nine ouch !!! If the music (!!!!) were not so racuous one could admire the energy and enthusiasm of the dancers !!

No rain here Raji, so we are in for a noisy deepavali!

Best wishes to all of you there.

This year was the first I got to see Golu since my husband, a Malayalee and grew up in North has no connection to it. Me, too but I love to do it.

But, yes, Dandiya/Garba is famous in general in America. When I lived in Boston in the late 90s' we used to go on Dandiya/Garba rounds for Navarathri- the colleges would start the dances about 7 and it would go to 2-3 in the morning so we would keep traveling to all the places to get a taste of each one!

The Hindu temple in Rochester, NY has both Golu and Dandiya/Garba.

Good experience for you. Happy Deepavali to you and family!

happy diwali to you all.. it must be great in new jersey - where you have a mid sized India. here we have little India near LA.

I hope you had a great Deepavali. Its nice to see the festive of lights being celebrated like this even in the US.

Very nice to read this and to know you are on a happy vacation, Raji :)

and to see Samyukta :)

so you didnt have to miss kolu after all:)good to hear that.

First time here, nice to read about your memories and other accounts!..

Hey Raji,
I like all the interesting things you've introduced on the blog. And enjoyed reading the post as always.

Happy Deepavali and Navrathri. It is is nice to see people celebrating this festivals in a traditional way even far away from India.

mylapore altap mami . where are you . I was expecting your kaarthigai deepam altaps.

I am a new reader to your blog. Love your writing and also that of Maiji's.

Wish You and all in the family A Very Happy New Year, Raji :)

still in the US?? No posts since long :)

Wish you and all your loved ones a Very Happy and Safe 2010!

Guess you are having a good time with your grand daughter there....

hello aunty, when do you get back ? I passed through chennai twice in december, stopping for a few hours overnight, next time hope to see you there

You've been rather quiet lately. Whats up Raji?

Raji,hope to see you back soon:)

Thank you , dear friends for all the nice comments.

It is nice toknow that I am missed (by some at least) in the blogging world. I hope to resume my posts soon.