On the night of Sivarathri, one is expected to stay up all night, worshipping Lord Siva, after fasting all day. Then one is assured of a place in Heaven in the hereafter, say our religious books. This year Sivarathri fell on February 23. 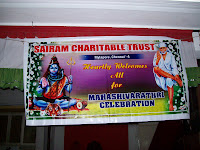 In our neighbourhood in Mylapore there are seven Siva temples, and devotees walk from one temple to the other, and thus pass the night in participating in the poojas. Others stay put in one place and do poojas or sing devotional songs. Our group Gangamritham was asked to participate in the Sairam Charitable Trust’s celebrations. We were reluctant to sing as our guru Ganga was not going to be in town, but we finally gave in, especially after Ganga encouraged us to. Only one of us, Vatsala could not make it. Here are the rest of us with organiser Usha (second from right). 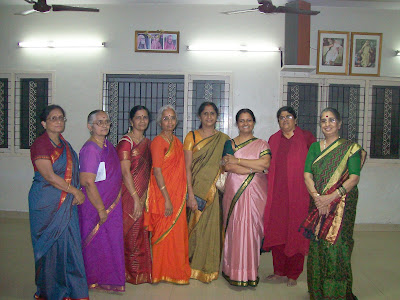 Ours was the first group to sing, and there were not many listeners, as the night was still young. The organizers told us that most people came in after visiting the temples. 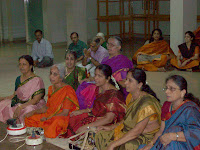 We sang for an hour, sans Ganga, sans mike and sans accompanists. But we were satisfied, for we had practiced diligently every day, and we knew we sounded in harmony.

The seven temples in this area are all said to have interesting stories attached to them. I once did the rounds for our paper with our photographer, however it was too hot in the day time to be enjoyable. But the history of each temple is remarkable.

Read about the temples here.
Posted by RAJI MUTHUKRISHNAN at 23:41

Interesting as usual ... I'd like to hear some of your singing sometimes !!!

Ladies, well done! And Raji, thanks for all the info about the temples - Mohan and Gowri.

It is a wonderful sight to see all the gracious ladies dressed in gorgeous sarees. The borders of the sarees are very attractive. Each lady wearing a different colored saree was a treat to watch.

It is interesting to know how the name Mylapore came into being.

Here in Kerala, Sivarathri is a very big festival and the Government declares a State holiday. The Aluva manalpuram festivities on the Sivarathri night is very famous and well attended.

Have a bright and beautiful day :)

Audio clip, please. Sorry if I sound as though I was always clamouring for it! :)
Good round-up on Shiva temples. You must have come across the book Thirumuraithalangal?

As usual a good enlightening read.

I second Swarna: it would be great to listen to audio clips of your singing.
Very interesting post, loved the stories about the temples. It's fantastic that these ancient temples are so alive and active to this day.

Sivarathri -- and I am reminded of SreeKanteswaram..i guess you know it, Raji :)

Nice reading this and to see the troupe..you look elegant :)

Sigh... missed getting a berth in heaven..!!

Great to see all you people with shining eyes, singing. Sri Kapaleeswarar Temple, is my favourite.