It began as a kolam festival organized by our neighbourhood paper Mylapore Times.

It was the brainchild of the editor, Vincent D’Souza, a man with a passion for the preservation of tradition and heritage. Over the years, under his guidance, it grew into something unique, the Mylapore festival, a festival along the lines of a village thiruvizha, centred around our Sri Kapali Temple, and extending up to Nageswara Park.

After some years, the festival came to be known as, and still is, as the Sundaram Finance Mylapore Festival, after the sponsors.

The festival promotes village and folk arts like street plays, and urban entertainment like heritage walks and stage plays. It showcases various art forms (like classical dancing in the temple, concerts in the park) and revives traditional games like pallankuzhi. I remember the men on stilts and how they danced to the frenzied rhythms of the drum. Wonder if they will be present this year – watch this space.

The area around the temple wears a vibrant look, and one feels glad to be part of it. Usually the days earmarked for this festival are the Pongal holidays, but this year it made way for the 'Chennai Sanagmam', which is actually, if you ask me, an offshoot of the localised Mylapore Festival, but on a much grander scale and level, what with Rajya Sabha MP Ms. Kanimozhi being part of the organising committee. (And it doesn’t hurt that she just happens to be the Tamilnadu Chief Minister’s daughter.)

The event is spread over four days this year from January 22 to 25. Some of the attractions this year are the Mylapore Light and Sound Show, put together by Mylaporeans, and a Thamizh lit fest.

A first this year is the Mylapore anthem or Geetham – listen to it. (You may have to scroll down a bit).

But the star attraction of the festival will be, as always, the kolam contest on January 24 and 25. Women from places far away come to the festival to show their skill at drawing those wonderful patterns. The street(North Mada Street) is turned into a veritable carpet of floral decorations. 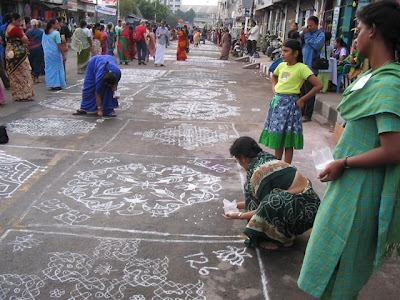 The picture here was taken by my sister Viji at the 2005 festival when she was visiting. 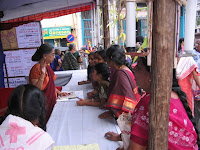 I was part of the behind-the-scenes activity then. That is me inside the booth answering questions.

I still remember the euphoria after the first contest,(only one day then) and the satisfaction with which our small group went home to a good strong cup of coffee, which Maiji had waiting for us.
Posted by RAJI MUTHUKRISHNAN at 14:47

i think we have to reword the PBS song to - kolangalil avar vasantham...

I am seeing kolams after many years. People in Chennai are very passionate about kolams.

Normally, cow dung liquid is spread over the road to give it a smooth surface and then kolams are drawn.

There used to be Theru Koothu, Karaga Attam etc. to enthral people.

A very famous coffee powder shop, named Leo Coffee, with branches alll over Chennai started in North Mada Street. I don't know if Leo Coffee is still being sold there.

Many thanks for sharing and making my memory jog a little bit into the past.

I can get the feel of the festival here in Guntur by reading your post. Interesting. Enjoy yourself. Have fun.