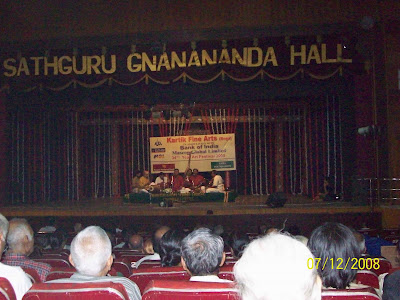 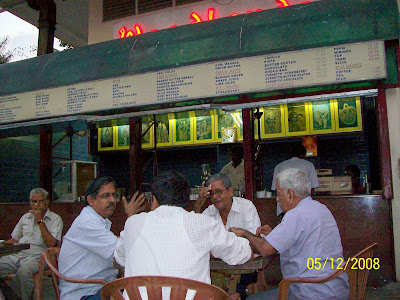 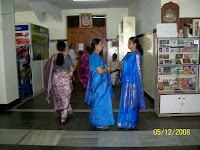 And here is where you can learn all about the music and dance world of Madras : http://kutcheribuzz.com/
Posted by RAJI MUTHUKRISHNAN at 10:23

i love Madras for its 'season' of Kutcheris, music concerts, Dance programmes...for its art and music loving people...

Had been there for eight months in 2003..My brother sings --not a trained singer but sings quite well -- and would never chose to leave Madras, he says :)

Today I've finished catching up with Maiji's, Yours and Viji's blogs...

Am I glad I stumbled onto these pages...

There is much I would've liked to say to express my delight, amazement and awe after having read slices off your lives, but I refrain simply because words fail me...

Thanks for sharing the mood of the season! I love the picture of the gentlemen at the cafe, with their hands waving 'taalams' in the air!

errr Raji, I think you've forgotten to hyprlink the url of the schedule...
Thank you

Ardra, thanks, fixed the link.
And welcome to our blogs - glad they gave you so much pleasure - on behalf of Maiji and Viji too

I Love those ladies in colorful sarees and them gold accessories they adorn themselves from Head to Toe.
More pictures please..

The last time I attended one of those concerts are in the 60's
by Madurai Mani Iyer.

Beam me down anytime to one of those concerts thru your posts..

Raji, Good you are right in the thick of dressing up and keeping time and identifying raagas and throwing out knowledgeable remarks.
And getting some good coffee which you didn't make too. :-)
Very descriptive post which catches it all.
If you watch the competion for airtel Super singer, there are people saying 'nanna irrunthuthu ' off and on stage . So, trained in music still seems to be a Brahmin thing.
It is taking time to catch on.

Great Raji. I was looking for a good link, and I found yours. Thanks!

just got pass mark in mayamalavagoulam.

How beautifully you've captured the whole ethos of the season! Some of my best memories of Madras are from the kutcheris I attend.

Hi..
I am Madhan, a final year Engineering student at Anna University, Chennai. I have just started blogging, primarily on Bharathanatyam. It was nice readin your blog. Please do read my blog http://madhanaraghavan.blogspot.com/and give me your valuable comments.

it is enviable actually - being able to sit and listen to class music and being able to talk about it with knowledgeable people. Ah ! well, we are not so fortunate raji..

Seasons Greetings and a Merry Christmas to all there ..

came for a new one..
now, after Christmas?

Nice post! Quite Hilarious... Reminds me of the Ananda Vikatan articles, I used to read long back.

thanx for your comments in my blog.

Have a great time :)

Raji, wishing you and your family a very Merry, Merry Christmas. xo

I enjoyed reading it.

Many thanks for sharing.

Wish you a wonderful day full of joy and happiness :)

Honestly, it is such a treat to be able to read your account. It is quite 'transportative' to say the least.

I haven't attended any in Chennai but the equivalents, yes, though in other music forms, and maybe not as much discussion.

I just hope the Brahmin tradition continues if for nothing else than for the fact that it contributes a strong ethos and tradition to this very multi-cultural country of ours. And I believe Chennai can lay a strong claim to this.

I was there when the season just starts ..

Sansmerci, thanks - my visiting family found your blog very helpful when they wanted to eat out!:)

Ardra, Thank you for the nice sentiments.

Anonymous - more pictures may turn up.

Kallu - yes, I see what you mean. Why is what I can't understand.

Swarna, thanks for the link, feels good.

Kat, We know too well how you undersell yourself! :)

Kamini, nowhere else can one find this 'fever'.

Madhan, thank you . Your blog has started off very well. Keep it up.

Maddy, I agree - and that is why I enrolled for my music class - just to be in the swim...

Sandra, thanks and wish you the same.

Anil, once upon a time it was this very group who condemned music and dance as an unpalatable activity for 'family' persons, especially girls - it has taken a hundred years for both arts to be unfettered from this stigma and take their rightful place in public.

Lakshmi, that is nice.