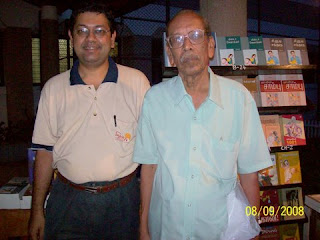 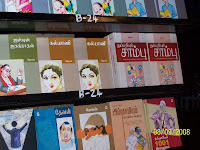 The recently published volumes, Lakshmi Kadaksham, Mr. Vedantam, Justice Jagannathan, Kalyani and CID Chandru, were on display and for sale at the venue.
Posted by RAJI MUTHUKRISHNAN at 21:53

Good reading!
And good idea, about the audio versions. But I wonder if busy lives can let the ear remain tuned for even a short while!

Good idea to listen while you are busy...

Great idea. Especially since most literate Indians are illiterate in the tongues they speak so well. Even if I had the time to read I wouldnt be able to read these books...

Charukesi celebrates Devan book release. The said book/s are released by A Mitran to Vannanilavan. Mitran then makes rambling speech, but nevertheless speech is funny! Then there is a play reading.

Oh I missed out Badri... where did he fit in let me see... aah he is sponsor?

I think I shall go by some Devan books.. hopefully they have fewer characters in their plot/s?!

I love going to book releases. :) I get books on audio to listen to on my drives to work. Makes the trip seem to go faster. :)

Thank you Raji for walking us through a different world-of-authors-and-books. Read spellbound.

Your suggestion is a good one - audio cassettes. While reading books thrills... perhaps one has to compromise, to catch up.

Thanks Raji for sharing this. You're right that English language books get all the glamour and publicity, and it's time that changed. The audio idea is a good one, I think - they could be made into Podcasts as well.
Kamini.

Thanks Raji. Good to know the happenings in Tamil literati too.
And nice interesting take on people there.
I havent heard any English books on audio so I really dont know how tamil stories would sound - like 'oli chitram' on radio? it would be good then with the right voices.
We could at least listen in the kitchen.

Hello Kalyani... middle age is catching up? :) Of course you've heard of English books on audio..!

Do read the discussion in your blog http://middle-spot.blogspot.com/2008/02/thousand-splendid-suns-by-khaled.html

(sorry Raji for replying in your forum)

Kat, you are most welcome to use my blog space. And I salute your memory for others' posts and their comments!

I have never been to a book release yet, and audio books are a great idea!

Kat, I meant that I hadnt heard an audio book- not that I hadn't heard of them.
Great memory:-

New Horizon Media does release audio books - in English as well as Tamil. The book on MS by Veeyesvee in the audio format is really a good one.Details here - http://nhm.in/audiobook/641/MS%20-%20Vazhve%20Sangeetham%20-%20Audio%20Book
The print edition of this book was releases a year ago. May be we would listen to Devan's writings soon!

Swarna, sometimes it is different to concentrate if you are working. But when you are doing mindless jobs like dusting etc., you can enjoy these.

Flowergirl, Good if some Devan books get bought!

Gretchen, yes. Thanks for dropping by.

Kat, reading is the best, listening is only for those who don't have the luxury of time.

Kamini, thanks. My emphasis is more on the dramatised readings rather than just plain readings - you know, a different voice for each character.

Indrani, we must set that right. Let's have you here for the next.

Revathi, thanks for giving the info and the link.