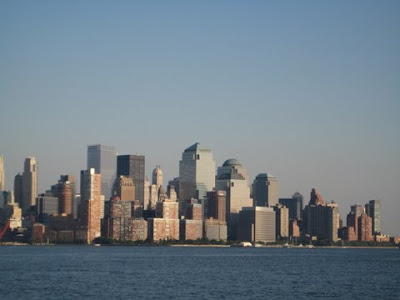 Every time I look out of our window from Sriam's Hoboken apartment, I am spellbound. The New York skyline, so close, like you can put out your hand and reach out to it, presents a theme in chiaroscuro.
Sriram tells me that the part of the skyline we see from our window was where the Twin Towers of the World Trade Centre stood, rising high above the other buildings. 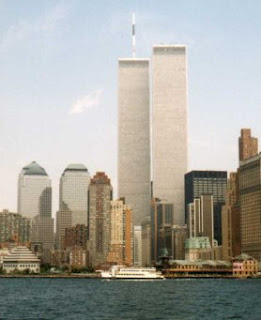 Never having seen them, I don't feel the absence, or miss them. And it doesn't stop my enjoyment of the view of the other skyscrapers which were there long before the Twin Towers -which came up only 30 or so years ago.
The picture here is taken from the net; the other picture, taken by Vandana, highlights the beauty of the view, and also marks the space where the towers were.
In the summer morning sunlight, the buildings are awash in the pink flush of dawn, glowing lightly.
In the daytime they stand clearly across the blue background, each window on each floor distinct. In the evening the setting sun's rays fall on the buildings, and the reflection from the glass windows make the sklyine glimmer. 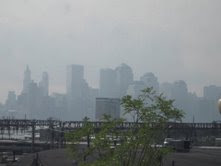 On some rainy days you can barely see the skyline,(small picture) and after the rains the buildings look so bright.
But it is the view of the skyline at night that is the piece de resistance.
When walking on the waterfront on the summer evenings, one can see the skyscrapers glittering like jewels of a fabulous potentate.
This glittering skyline was the backdrop of a local theatre's (Mile Square Theatre, Is it because Hoboken is only about one square mile?). presentation of Shakespeare's 'A Midsummer Night's Dream.
And on that summer evening, beside the river on the open air stage, it was entirely credible that the fairy king and queen could come with their minions, including Puck, and mingle with mere mortals. Hoboken was the birthplace of that musical legend Frank Sinatra, and the play cunningly included his songs into the play, set in the early 50s. The play within the play ploy, with Bottom and company presented as workmen on the waterfront*, proved just as funny as it must have 400 years ago, judging by the guffaws of laughter from the receptive audience. Shakespeare works just as well today.

*The Marlon Brando movie 'On the Waterfront' was based on the problems of the men who worked here.
Posted by RAJI MUTHUKRISHNAN at 16:08

Email ThisBlogThis!Share to TwitterShare to FacebookShare to Pinterest
Labels: New York Skyline, Shakespeare on the waterfront

And that was a great movie (still is.) Brando, Karl Malden, Lee J. Cobb, and Rod Steiger. Elia Kazan's brilliant direction.
"I could've been somebbody. instead of a bum, which is what I am."
One of the all time classic lines in a movie.

spectacular stuff... to read. and some trivia to remember :)

I could have been a contender.