MODHAKAMS, KOLU AND THE DIGITAL KIOSK 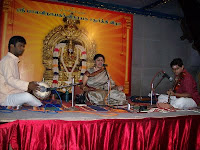 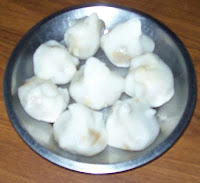 The festive season is rolling on colourfully. Sri Vinayaka Chathurthi, with its modhakams (the little sweet kozhakattais that Ganesa is so fond of - see picture) and week long concerts at temples went by and now there is a little gap before the next festival comes along - Navarathri. It is the big one, lasting nine days, and culminating in Saraswathi Pooja and Vidyaramabam.

There is a pantheon of Gods to worship all round the year, and nothing delights our hearts as much as the poojas and the celebrations associated with them. Navarathri means the ‘kolu’, the arrangement and display of multi-coloured dolls on steps. The pavements of North Mada Street in Mylapore are once again full of the lovely dolls. We are packing our bags to visit our new granddaughter next week, and I thought I might miss seeing the ‘kolu’ which begins only after we leave. But there was a pleasant surprise waiting for me when I went to Giri Trading Agency, a storehouse of stuff dealing with Indian culture and tradition, near Sri Kapali Temple. They had this lovely kolu right at the entrance with brand new dolls. And I was delighted to see it.

Click on the picture to enlarge
Inside, I was looking for a particular CD – Hindi film songs of Yesudas – and though there were many albums he had released, there were none there that day. Just my luck, I thought, and decided to make tracks to other places to hunt for them. Though I had no desire to trudge in the heat to various shops to look for what I wanted - September has been unusually hot this year, and we are sweltering.

An energetic and enthusiastic salesgirl asked me if I was willing to look at the kiosk. I looked at her blankly, and she explained how the kiosk was basically a library of all the songs (with copyright) and I could choose what I wanted and they would be recorded on a CD or on MP3 format. I was quite intrigued but was willing to try. I learnt that is it is called a digital recording kiosk, and has been around for a couple of years. Strangely, not having felt the need for any songs that were not on discs, I had not really bothered to check them out. The kiosk has a touch screen keyboard. She typed in the name Yesudas, and there was a list of his albums. I could now choose the songs I wanted. This was neat. The procedure did not take long at all, and I had with me the best of Yesudas’s Hindi songs. – and a new experience.
Posted by RAJI MUTHUKRISHNAN at 12:43

Most interesting to read and the photo's are very good.

Have a great week-end.

PS. Thanks for the vist and kind comments. much appreciated.

Yesudas is a great singer, could you tell us what songs of his you burnt to the cd? I would love to listen to these

Nice that you got your Yesudas songs so easily!
Those kozhakattais made my mouth water!

A visit to Giri Trading and the digital kiosk is called for I think!

Thanks for the tip!

Wow - that transported me to Madras so effortlessly. A good trip! I am glad you got your wish and saw a kolu.

Interesting. I don't know if there are such legal digital kiosks in Mysore. Wish there was one.

Really nice post ! There is a Giri trading agency in Bangalore. I will check if they have such a kiosk ! Sounds like a great way to have the music you want..

We are online florists and we help you to send Gifts and flowers to your dear ones to India. We undertake same day delivery. We have a wide Range of Gifts are available for all kind of Occasion. http://www.giftwithlove.com

I absolutely appreciate this for keeping our madras culture alive :)