I went to the Mylapore festival just to see the kolams on North Mada Street at the kolam contest.

Do click on the pictures for an enlarged view 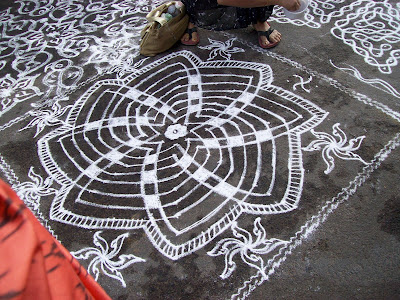 Squares about three or four feet wide had been marked and numbered, and contestants were given each a bag of white powder and 40 minutes to exhibit their skills.

Kolams are the patterns traditionally drawn by women with rice flour on the ground, smeared and cleaned with cowdung, in front of their homes. It is considered auspicious, and of course decorative and ornamental.

Cowdung is used for its anti bacterial properties, and helps to make the ground smooth and dark. Rice flour is used so that living beings like ants and birds can feed off it. 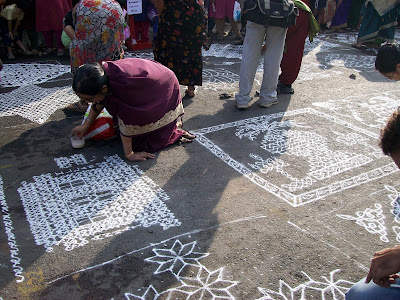 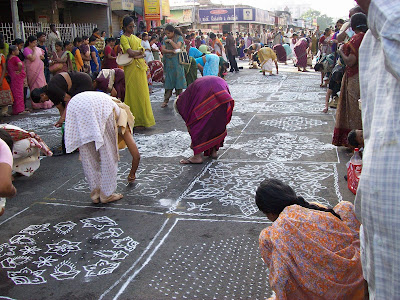 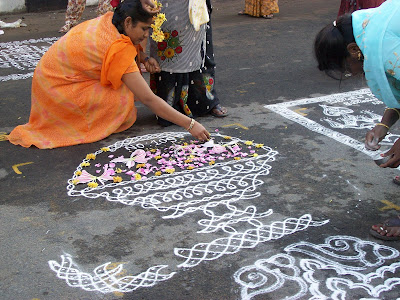 This art has been prevalent for so many centuries, handed down from generation to generation, learnt by girls by watching other women do it. To these they add their own creations and designs, letting their imagination and artistic skills take over. 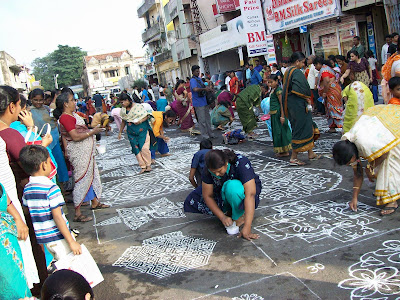 Women who have never been to schools, and cannot count even up to thirty, can with ease draw kolams which require even a hundred dots.

At the Mylapore festival, no colours are allowed for the kolams (which then become rangolis) and the rule says they have to be based on pullis (dots), the traditional way of drawing them. 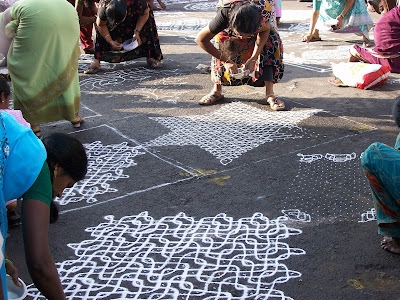 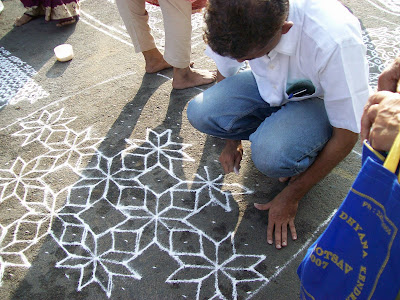 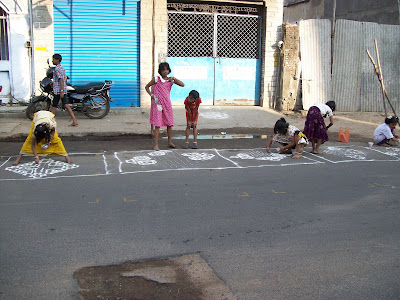 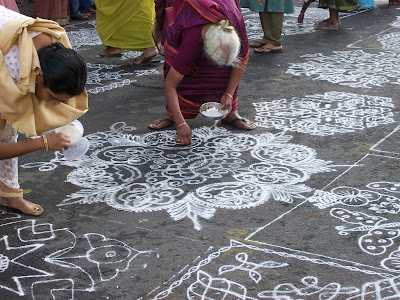 Neither age nor gender was a deterrent to the participants’ enthusiasm.

This is a post script. In many homes in Chennai, it is the domestic helper who does the kolam in the mornings in front of the house. Here is my assistant with her creation in front of our neighbour's house on Pongal day. 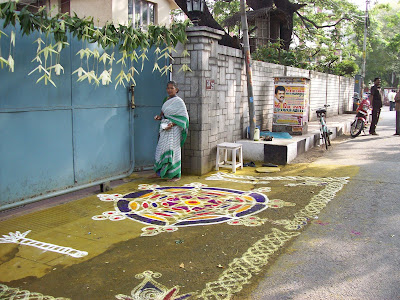 And this is My World Tuesday this week at Mylapore.

Posted by RAJI MUTHUKRISHNAN at 22:46

Thanks for posting this and sharing the photos with us. Someday I hope to come! What an amazing event.

For you and your reading pleasure

I didn't know there is a festival for this. Very well captured shots!

Those are some of the most complex designs that I have seen and I m sure huge efforts would have gone in creating these with just chalk powder. In good old days I remember my mom doing this everyday in the morning in front of the home...Thomas

That was just lovely to see, Raaji..

When in Madras, i used to watch people doing it -- with my usual awe :)

Used to wonder at the speed of their hands :)

Kolam festival appears to be very grand and drawing a lot of spectators. Some of the kolams are spectacular.

I was surprised to see that even men are participating in this festival. I always thought that kolam was the presreve of women because I have not seen any man drawing kolam when I was in Chennai. Times have changed. Just as women are invading mens bastions, men are also competing with women. This is a good sign. In the end who won? Men or women? Of course women must have won because they participate in large numbers compared to men and also due to the fact that women have years of experience.

I hope those small children drawing kolams would have got at least a consolation prize!

Your assistant looks very smart. She has drawn a beautiful kolam.

Many ladies in Chennai will not start their day without a kolam in front of their house. That shows their discipline and dedication apart from the fact it is a tradition.

awesome! I can only imagine the time spent making them beautifully perfect.

I am Raji !I missed visiting your blog as well... but I 've had so much worrk lately ...
Anyway, I love those drawings ...some are very complicated, it's a real art, an inspiration !

Amazing! What an effort to create this!
I hope I someday can see this in real life - I have never been to Inda. Yet...
/Helen

Lovely, Raji. It makes me so happy to see that this wonderful tradition is thriving.

Amazing patience. It is good to keep old art forms alive. Thanks for sharing this!

Great Pictures... I am not the best person to comment on a kolam because the best I can do is two triangles to form a star and embelish it with arcs and dots.

And it took me the best part of a decade to achieve even that :-)

Such wonderful intricate patterns are amazingly all done by hand! Thanks for sharing this, I like best the last shot of your neighbours servants design with the colours and the handing decorations too, really first class.

I always used to admire seeing the fingers deftly running between the dots, leaving a trail and finally a beautiful design emerges.

Nice to see so many people enthusiastically participating.

The anti-bacterial material too must've been included in the contest.

Raji - welcome to MWT!
I miss home, seeing all those kolams.

Pradeep, the pictures are good because of the subject!

Jennifer, I am sure you will come back and see all this.

Thank you k, for those valuable links.

Thomas, yes, a woman's artistic skill is often judged by these.

Devika, glad you liked the pics.

Joseph, I understood there were special prizes for children, but don't know about men.

Marites, yes, practice and a good memory (for placing the dots and linking them) makes them perfect. Thanks for visiting.

Namaki It is truly an art

Helen, I do hope you can too. Thanks for visiting.

Kamini, your blog on this topic was inspiring.


tsiya , thank you for visiting. Yes it does take a lot of time and patience to created the kolam.

Glennis , thank you for visiting. Yes my assistant is really proud of that kolam. And that decoration was for one of our festivals - Pongal.

Kat, the enthusiasm was infectious out there. Nice new picture, by the way.

That was so very awesome...We do have Kolam competitons in Malaysia but not with that crowd and we do not draw them before we go to work, neither our home helpers does it, as majority are from Indonesia....I managed to learn about 2 kolams, draw it during festival...

Hi,
Wonderful pictures. Thanks for sharing them here. I miss my HOME. I am a homeschooling mom to two wonderful kids who are so passionate about India and have been recently interested in Kolams. I was trying to find some info on the web on Kolams to put on my blog and stumbled across yours. I hope to stay back a little longer in Chennai when I visit this Dec/Jan:)
Thanks once again
Subadra
http://bookslinksandmore.blogspot.com/

thanks for your post,its wonderful,to more kolam pics visit this

Hello Madam,
These are just amazing! I learnt the art of kolam from my grandma.. I remember her while reading this post. I was searching for writer Sujatha and i got your blog. Your blog is simply superb! All the best mam.