On a recent trip to Thanjavur, something caught my eye, apart from the fertile green all around.

Since we travelled by road, it took us through many central places in towns and cities. Many wedding halls have sprouted on either side of the roads, weddings being an ever popular activity, I suppose. There were many halls in the Pondicherry sector, too. And the day we had chosen to travel was obviously a muhurtham day, for the halls were well decorated, and as evening neared, well lit, too.

All normal, of course.

But what was arresting was the sight of huge banners /boards in front of the mandapams, announcing to all and sundry the names of the new couple, and decorated with larger-than-life photographs of the beautifully dressed and bejewelled bride and groom.

Well, one could say they are the hero and heroine of the day. And to them, it would have been a move up from merely decorating their wedding invitations - a trend in recent times.

Anyway, it made a pleasant change from the made-up faces of jaded movie stars, the CM and other politicians who normally greet us from posters and banners.
Posted by RAJI MUTHUKRISHNAN at 16:01 10 comments:

Email ThisBlogThis!Share to TwitterShare to FacebookShare to Pinterest
Labels: Posters and banners 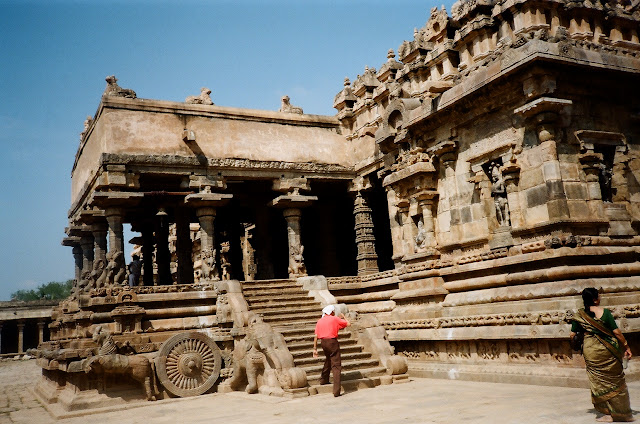 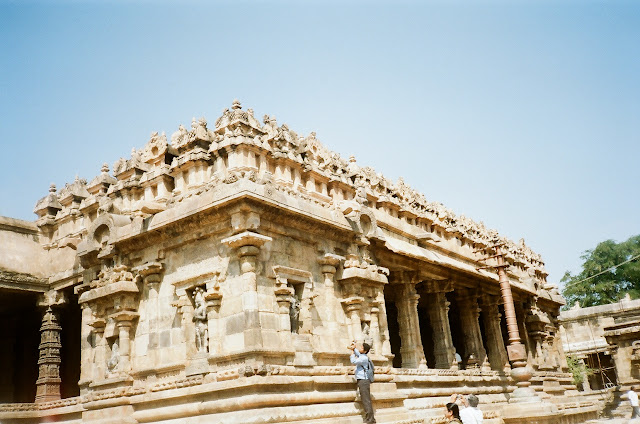 The last temple we visited on this trip (earlier blogs have reports on other temples!)was Lord Airavatheeswarar Temple, at Darasuram, called so because Airawatham, the elephant of Lord Indra, is said to have worshipped Siva here.

Near Kumbakonam, this temple is a heritage monument like the Brihadeeswarar Temple, and was built by Raja Raja Chozha‘s grandson, Raja Raja II. Modelled on the older temple, this marvel of Chozha architecture is a visual delight. 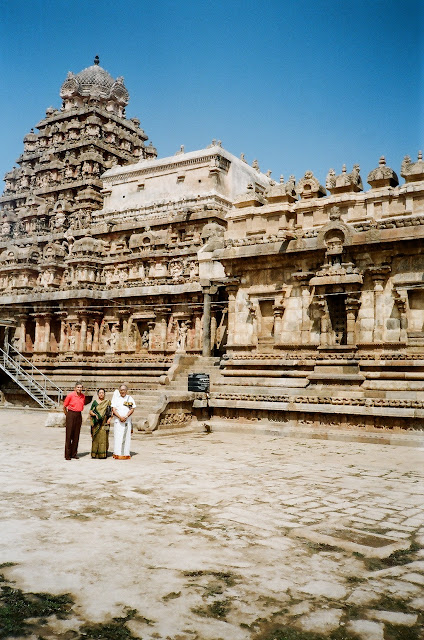 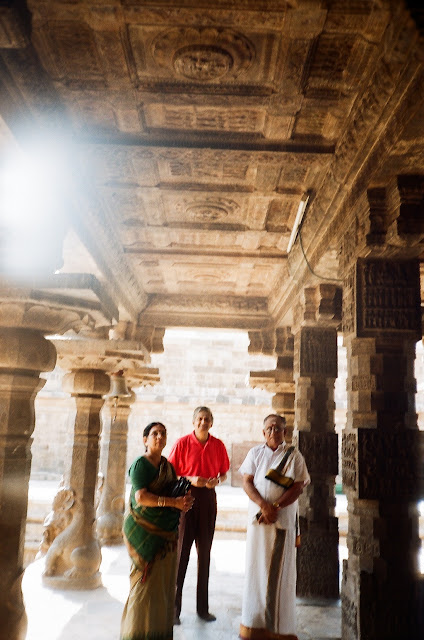 But sadly many parts have been left to deteriorate, though there was evidence of renovation work going on. 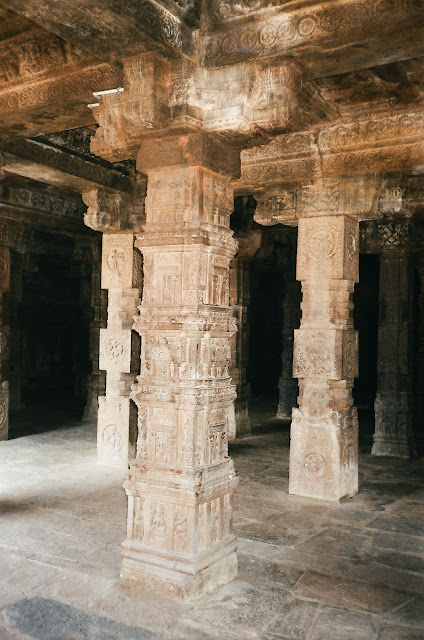 Every part of the temple begs to be noticed and admired. The foot high figures on the pillars look like fretwork and seem to match the pictures of the intricate carvings at Belur in Karnataka – another place I must visit, I have decided.
The pictures speak for themselves.

And outside the temple, the grounds are immaculately maintained with lush green lawns. I was instantly reminded of Humayun’s Tomb in Delhi, which we had recently visited. 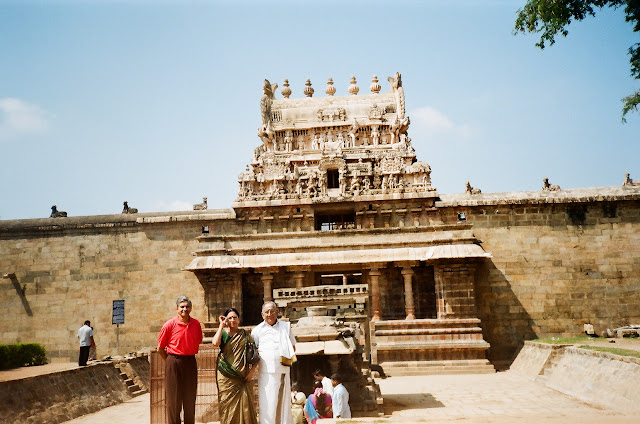 More historical details can be had here -
http://www.tamilnation.org/culture/architecture/darusuram.htm 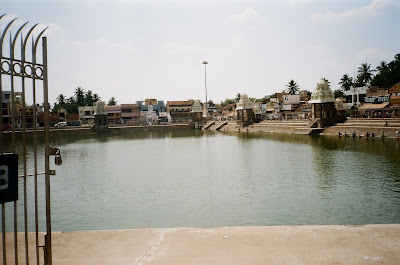 And on the way back, after taking a quick peep at the Mahamakam tank at Kumbakonam, we stopped at the Chidambaram Temple, but the sannnidhis were not open for darisanam, and we could not wait longer.

On our visits to all the temples, I was happy that there were no crowds. Maybe it was the days we chose, or the time we went.It was a peaceful experience, but for one incident, which could be a lesson for others too.

Though we stayed at a hotel in Thanjavur, we went to different eating places for our meals. The food was uniformly good everywhere – not to mention the coffee. The eating places, one really cannot call them restaurants, were simple and clean, and the prices ridiculously reasonable. At one of these places, while we sat down to lunch, my husband placed his camera case, containing his purse and reading glasses on a chair behind him, while we ate lunch. (The camera had moved into my bag at some point!) Though he made sure it was there from time to time, by the time we finished lunch it just was not there. Somebody had flicked it. Fortunately the loss was not great, some cash and his glasses. But he was sore at having lost his address book and our granddaughter’s photo which was also in the purse.
One place clearly said on a notice board that the management was not responsible for the loss of patrons’ belongings.

We learnt it the hard way. 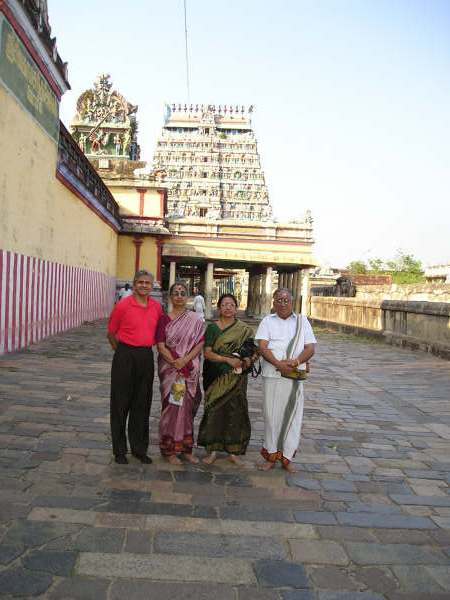 Posted by RAJI MUTHUKRISHNAN at 15:39 10 comments:

Email ThisBlogThis!Share to TwitterShare to FacebookShare to Pinterest
Labels: A lesson, Airavatheeswarar Temple 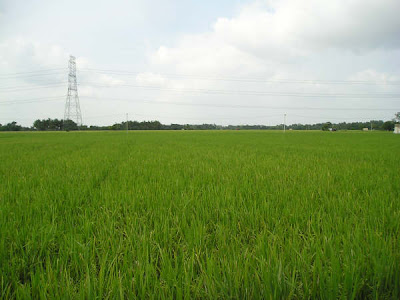 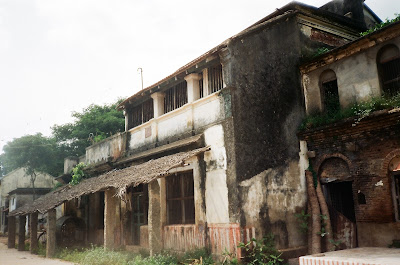 Once upon a time, when my husband’s grandfather lived there, he owned a lot of land, which were then left to his sons. Over the years the acres have dwindled.
But I can imagine a time when there would have been green fields everywhere and children coming home from school at Thirukaattupalli, the nearest town, and playing and calling out to one another.
I have been recently reading my mother-in-law’s autobiography again, which she wrote for her family, and the chapters came alive for me there.
Posted by RAJI MUTHUKRISHNAN at 13:33 6 comments: 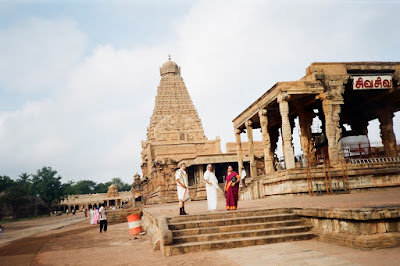 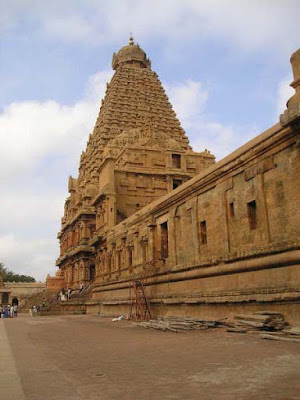 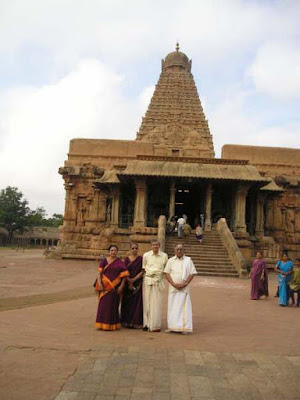 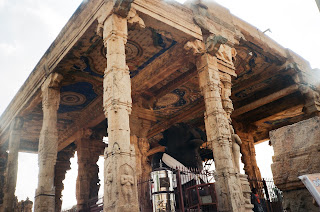 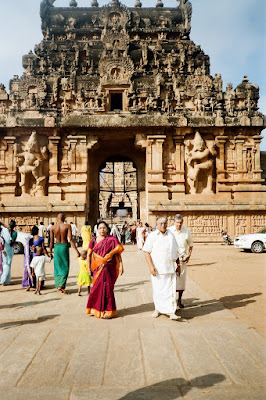 Another temple we visited on this trip was the Sikkal Singaravelan temple, where Lord Muruga is worshipped. At this temple every year during kanda sashti, when soora samharam is enacted, Devi Uma, called Vel Nedunkanni Ambal here , hands Lord Muruga the vel (spear) to kill the demon. At that moment, the deity perspires, said the priest there. He perspires all over, and outside his kavasam – and this happens only on the one day of the year. Doctor JB said that a friend of his has witnessed this phenomenon.
Posted by RAJI MUTHUKRISHNAN at 11:01 7 comments: