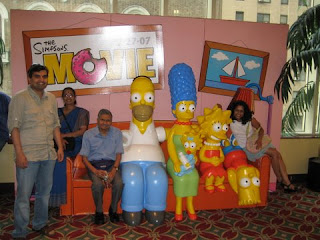 We went to a movie yesterday. In a way it was a first of sorts.
Though we have visited this country before, this was the first time we went to a movie theatre in the USA - unless you count the visit to the Imax theatre in Los Angeles.
From the street, there was nothing to indicate what is inside, except the lights on the marquee.
Upon going in, I was amazed to learn that the building housed 14 theatres. While I stood with mouth agape, my daughter-in-law Vandana told me that there were complexes on Times Square which housed more than 40 theatres.
Our theatre on 34th Street, was on the 4th floor, and steep escalators ran up and down
No crowds, no conversations, no agitated shouts, it was so quiet, it could be called dull. Where was the excitement, the throb of humanity, the vibrant loud thrum that accompanies the screening of movies in India, specially, Madras?
Isn't that part of the movie experience?
And I was in for a big shock when I entered the theatre - it could house barely 250 people.
We were to see 'Knocked Up', one of the latest pictures, and there were no crowds on a Saturday evening - only half the seats were filled.
In the foyer of the 4th floor I noticed 4 big posters from the old movies. Adorned in intricately designed frames, the posters were from favourites of the golden oldies - 'Gone With The Wind', 'Casablanca', and 'Godfather'. the other one slips my mind - a reminiscence of the glorious days of cinema.
I could imagine Vivien Leigh, dressed in her beautiful robes and flashing jewellery, hanging on the arm of a dashing Clark Gable, entering the theatre for the premiere of Gone with The Wind, amid the clamour of star struck fans.
On one of the huge landings was a bench with a larger than life Simpson family seated in full splendour - an indication of present day favourites.


But people haven't really changed. The crowd - herd?- mentality persists
The crowds that shun the movies have not disappeared - they have only moved on.
Earlier in the week I had read in the New York Times about people who were waiting in line for the iPhone to be sold. On Thursday we saw pictures of people who had taken up spots in front of Apple Stores to buy the iPhone, from Wednesday evening, to buy the phone on Friday at 6 pm when the sales would begin.

How crazy, I thought - Lord, what fools these mortals be, was what rung in my ears. But my husband was not satisfied with the reading - he had to see for himself what he calls the 'Sivaji' of New York and check out the peo 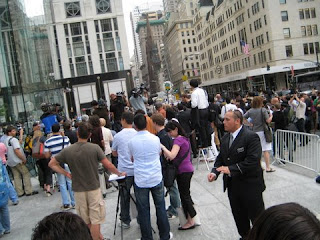 ple who would wait for two days for a hand held device costing almost $500. On Friday evening at about 5 he was in the city with Vandana at the flagship Apple Stores on Fifth Avenue.
And there he saw the queues of people which went beyond three blocks - people just waiting to buy the phone.
And there was the media with cameras and mikes, talking to the people in the line. And Starbucks was giving away free cups of coffee - product placement? - while someone was giving away bottles of water.

Some youngsters asked my husband if there was a carnival or celebration going on, and he enlightened them. Another one wondered if the 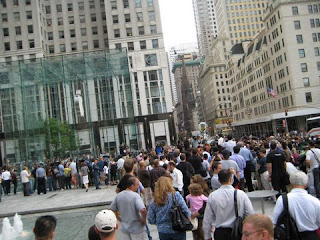 release of the latest Harry Potter had been advanced.

What impressed him, said my husband was the kind of people waiting in line - they could be anyone, he said, a doorman or a finance analyst.
Some of them were ready to, in fact had been waiting to, sell their spots on the queue before the shop opened at 6 pm. Others said they had planned to sell them on eBay, and even Craig's list - an online shopping place for selling and buying used goods!!!

Vandana says that iPhones are going at $ 950 each on eBay, average price. so one can guess what the doorman types were doing there.

And on the dot of 6, the store opened to make the first sale of iPhone
Posted by RAJI MUTHUKRISHNAN at 09:22

7-Eleven is a major sponsor of the "The Simpsons Movie" to be released on July 27, 2007. One of the characters in "The Simpsons" is Appu, an Indian, who manages a convenience store called Kwik-E-Mart.
A dozen 7-Eleven stores, across the country, are being made over this week into replicas of the fictitious Kwik-E-Mart seen in the TV series, stocked with real versions of fake Simpsons products like Buzz Cola, Krusty-O’s cereal and Sprinklicious doughnuts.
A very clever marketing idea!

Lovely to read that first person account of the I-phone launch in your inimitable style. Thanks, Raji! While reading about it in our Indian newspapers, my thoughts echoed yours. Lining up early morning for a phone...??? I guess it takes all sorts!
Poornima